“I really wish I could tell you I’m surprised by this, but I’m not.” 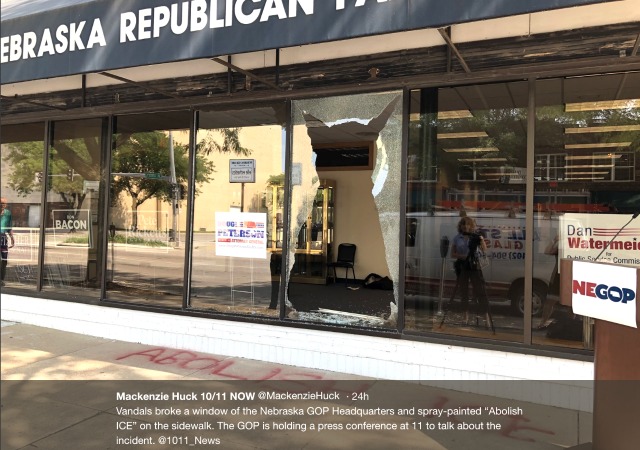 We’ve been documenting the harassment of people within President Donald Trump’s administration and the government over immigration.

Looks like the list has expanded because vandals smashed the GOP’s office in Nebraska and spray painted ABOLISH ICE on the sidewalk.

Someone threw bricks through the Nebraska Republican Party’s office windows in Lincoln and spray-painted “ABOLISH ICE” on a sidewalk in front of the building, party officials said Tuesday.

Executive Director Kenny Zoeller said the vandalism happened between midnight and 3 a.m. at the party’s downtown office, three blocks from the state Capitol.

The vandals caused approximately $1,200 in damage, according to a Lincoln police report. One brick smashed all the way through a front window, and another shattered one pane of a second window’s double-paned glass. A newspaper carrier discovered the damage shortly after 3 a.m. and called authorities, police said.

Zoeller said someone also spray-painted the word “Resist” on the party’s front windows in December. He said his office frequently receives threats of violence, particularly in the wake of President Donald Trump’s election and the heated national rhetoric that followed.

“I really wish I could tell you I’m surprised by this, but I’m not,” Zoeller said.

Zoeller told the media that GOP activists have started to donate money to help cover the repairs “and plan to use the incident in a fundraising pitch.”

While they vandalize, we organize. @GOP #LeadRight

Vandals broke a window of the Nebraska GOP Headquarters and spray-painted “Abolish ICE” on the sidewalk. The GOP is holding a press conference at 11 to talk about the incident. @1011_News pic.twitter.com/UFhhIj8H1b

Chief Bliemeister:
“The Lincoln Police Department is investigating the vandalism that occurred at the Nebraska Republican Party office. Every criminal investigation deserves our best efforts and this incident is no different. Officers canvassed the area for witnesses, processed the scene for evidence, and are collaborating with nearby businesses for video surveillance. Investigators are following up on all leads, including tips from citizens. As with any incident, the Lincoln Police Department is responsible for serving victims of crimes, conducting follow-up investigations, and ultimately, resolving the case to the best of our law enforcement abilities. Anyone with information is encouraged to call the Lincoln Police Department at 402.441.6000 or Lincoln Crimestoppers at 402.475.3600.”

Mayor Beutler:
“An act of vandalism committed because of political disagreement is reprehensible and should never be tolerated. That’s why the vandalism that occurred at the Republican Party Headquarters should be condemned by all. It is insulting to suggest that Lincoln police officers would ever put politics above their job to protect and serve our community. Our Administration has consistently demonstrated that the safety of all residents is our top priority. J.L. Spray shouldn’t be exploiting this issue to further divide us, he should using it unite us behind the cause of political civility.”

“We understand how frightening it is right now to be working in politics where people are resorting to violence, racism and other divisive rhetoric,” said Jane Kleeb, the party’s chairwoman. “Our workplaces and homes are meant to be safe places where we pursue our goals and dreams.”

Rep. Maxine Waters called on for those in “The Resistance” to confront Trump officials, but like I said before, the left has targeted others. A DC socialist group chased DHS Secretary Kirstjen Nielsen out of a restaurant and then confronted her at her private residence.

Actor Peter Fonda demanded someone rip Barron Trump from Melania Trump’s arms and thrown him in a cage full of pedophiles.

Protestors tried to harass Senate Majority Leader Mitch McConnell (R-KY), but his wife, Transportation Secretary Elaine Chao, was not having any of their crap!

Authorities also arrested a man who allegedly threatened to chop up Sen. Rand Paul (R-KY) and his family with an ax.

It looks to me like someone took a glass cutter and cut out the shape of a cat before throwing the brick. It is not by chance that a pussy hat shape appears in the broken glass. Democrats will do what Democrats will do. The time is coming soon when the Democrat Party will have to be outlawed, and Communism and Socialism banned from this country.

The first thing I thought of when I saw that was:

Why would the glass break in exactly the shape of Pikachu from pokemon?

If they were trying to invoke a “pussy-hat” with this glass-breakage, they missed the mark.

It looks to me like someone took a glass cutter and cut out the shape of a cat before throwing the brick. It is not by chance that a pussy hat shape appears in the broken glass. Democrats will do what Democrats will do. The time is coming soon when the Democrat Party will have to be outlawed, and Communism and Socialism banned from this country.

I would leave the glass design, back it with something black, and paint watchful eyes.

Funny how this sort of thing never seems to happen at Democrat offices… while it’s always Democrats who threaten others (not just Republicans or conservatives) while claiming to be the victims of threats.

See also Maxine Waters’ recent claim to be abandoning civility. Since when has she ever been civil?

Come on – let’s not be so behind on the curve. This is war.

This behavior by the left really makes me want to be ruled by them. They sure know how to get me to vote Democrat!

Illegal immigrant does not a good citizen make.

It will only get worse – the summer is just beginning, and the heat seems to escalate these folks into high gear/frenzy. I suppose inciting a leftist-loser to shoot a Congressman wasn’t enough – wonder what they will do next?!

OT, but related: I am surprised that no one has tried to twist their Twitter moniker into being RAAAAACIST:

@NEGOP….hmmmm…..switch the O and P and you get NEGPO — and, and, and… EVERYONE KNOWS that the P is an R in the Russian alphabet (Cyrillic script)….and, HEY, that spells NEGRO, and. and, and, um-like…. oh YEAH – that is a SUBLIMINAL ADMISSION OF GUILT!(TM) because RUSSIA……!!!!!!!!! /sarc

Woah – double whammy! Raaaaacist AND Russia all in one!! smh

(And yes, they are that BATsh!t crazy!)

Another Occupation by fascists, socialists, diversitists, perhaps, and other left-wing ideological factions?

THE WRATH OF THE AWAKENED SAXON
by Rudyard Kipling

It was not part of their blood,
It came to them very late,
With long arrears to make good,
When the Saxon began to hate.

They were not easily moved,
They were icy — willing to wait
Till every count should be proved,
Ere the Saxon began to hate.

Their voices were even and low.
Their eyes were level and straight.
There was neither sign nor show
When the Saxon began to hate.

It was not preached to the crowd.
It was not taught by the state.
No man spoke it aloud
When the Saxon began to hate.

It was not suddenly bred.
It will not swiftly abate.
Through the chilled years ahead,
When Time shall count from the date
That the Saxon began to hate.

I haven’t read anything about anyone suggesting the police force is acting politically.

Oh, wait … Beutler is a Democrat, so it’s in his party’s best interest to impugn Republicans any way they can.

When obama and gang infested it with ‘lottery’ immigrants.

DemoCraps SUPPORT this kind of behavior and even ENCOURAGE IT. Remember this the next time you vote and remove them ALL from Public Office !!

The more people that see them as the low life thygs they are, the better.

Lincoln, NE is the San Francisco of Nebraska, acts like this are to be expected.