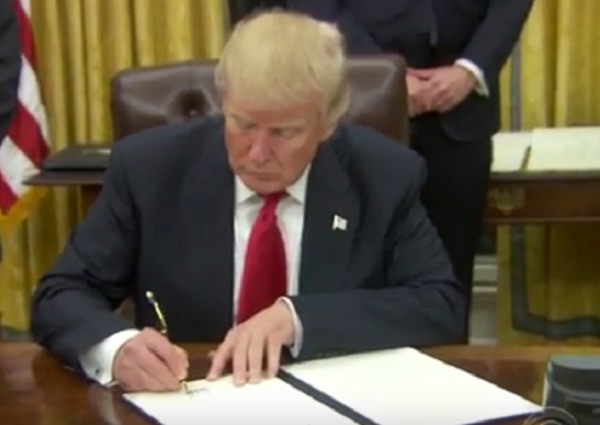 During his presidential campaign, then-candidate Trump repeatedly spoke of his intent to support life should he be elected. This week he took another huge step in fulfilling this promise with his HHS’s announcement of a new conscience and religious freedom division.

From the HHS announcement:

Today, the U.S. Department of Health and Human Services (HHS) is pleased to announce the formation of a new Conscience and Religious Freedom Division in the HHS Office for Civil Rights (OCR).  The announcement will take place at an event at HHS headquarters from 10:30 a.m. to noon.  It will be livestreamed here. Speakers will include Acting Secretary Eric D. Hargan, House Majority Leader Kevin McCarthy, Representative Vicky Hartzler, Senator James Lankford, OCR Director Roger Severino, and special guests.

The Conscience and Religious Freedom Division has been established to restore federal enforcement of our nation’s laws that protect the fundamental and unalienable rights of conscience and religious freedom.  OCR is the law enforcement agency within HHS that enforces federal laws protecting civil rights and conscience in health and human services, and the security and privacy of people’s health information.  The creation of the new division will provide HHS with the focus it needs to more vigorously and effectively enforce existing laws protecting the rights of conscience and religious freedom, the first freedom protected in the Bill of Rights.

. . . . OCR Director Severino said, “Laws protecting religious freedom and conscience rights are just empty words on paper if they aren’t enforced. No one should be forced to choose between helping sick people and living by one’s deepest moral or religious convictions, and the new division will help guarantee that victims of unlawful discrimination find justice. For too long, governments big and small have treated conscience claims with hostility instead of protection, but change is coming and it begins here and now.”

“President Trump promised the American people that his administration would vigorously uphold the rights of conscience and religious freedom,” said Hargan. “That promise is being kept today. The Founding Fathers knew that a nation that respects conscience rights is more diverse and more free, and OCR’s new division will help make that vision a reality.”

. . . . The move to create a new division at HHS for conscience and religious freedom follows President Donald Trump’s signing of an executive order in May “Promoting Free Speech and Religious Liberty,” with the goal of enforcing protections for religious freedom and amending the Affordable Care Act’s regulations that require the coverage of contraception. In October, the Trump administration rolled back the Affordable Care Act’s birth control mandate allowing employers to deny birth control coverage if they have a religious or moral objection.

One of the core missions of the new office is to enforce existing federal anti-abortion conscience laws that the Obama administration had bypassed with its own HHS regulations following state pushback on Planned Parenthood funding.

The pushback from various states was fueled by voter outrage over a series of undercover videos showing Planned Parenthood officials haggling over the price of aborted baby parts, including the brain of a baby who survived an abortion.

At the heart of the creation of the new division at HHS is a push by religious liberty and faith-based groups to enforce federal anti-abortion conscience laws, like the 1990s Coats-Snowe amendment and the 1970s Church amendment, which give nondiscrimination protections to federally funded programs that do not provide abortion services, and the Weldon Amendment, started under President George W. Bush.

The move Thursday could be viewed as an expansion of the Weldon amendment, which prohibits any state or local government receiving federal HHS funds from discriminating against any health care organization based on its refusal to “provide, pay for, provide coverage of, or refer for” abortions. The Obama administration pulled back the regulations, instead leaving HHS’s Office of Civil Rights to field complaints for violations of conscience and religious freedom laws.

To further pursue this stance, the HHS announced Friday that it would be specifically rolling back the rules on withholding federal funding from states that pursued the defunding of abortion providers at the state level.

The Trump administration says it’s reversing an Obama administration rule that protected Planned Parenthood and other providers from states seeking to freeze them out of funding.

And it took more action Friday to protect what it called religious liberties of healthcare providers.

. . . .  “This is part of the Trump administration’s commitment to roll back regulations instituted by the Obama administration to radically favor abortion,” Charmaine Yoest, assistant secretary for public affairs at HHS, told reporters in a telephone briefing.

In April 2016, the Obama HHS department told states they were in violation of federal law if they withheld payments from any qualified health provider, including Planned Parenthood.

“On Friday, CMS (the Center for Medicare and Medicaid Services) issued a State Medicaid Director Letter restoring state flexibility to establish reasonable standards for their Medicaid programs,” HHS said in a statement.

These actions reinforce President Trump as “the most pro-life president ever.”

And that fact can’t be understated. Though tremendously flexible on his other campaign promises, Trump hasn’t moved an inch on abortion, and that’s genuinely surprising.

. . . .  After Hillary Clinton danced around the issue of late-term abortion with carefully crafted talking points, Trump’s opinion came full-term. “If you go with what Hillary is saying, in the ninth month, you can rip the baby out of the womb of the mother just prior to the birth of the baby,” Trump said.

“Now, Hillary can say that that’s OK. But it’s not OK with me, because based on what she’s saying, you can take the baby and rip the baby out of the womb in the ninth month on the final day. And that’s not acceptable,” Trump continued.

It was brutal and it was blunt and it was the most succinct and successful articulation of pro-life principles in presidential politics. Three weeks later, Trump beat Clinton with the overwhelming help of the religious Right. He carried the Protestant vote, won the Mormon vote, and became the first Republican since 2004 to secure the Catholic vote.

One year into the Trump presidency, it’s clear they got their money’s worth.

The Christian Advocate notes that President Trump has “turned the HHS from pro-life antagonist to advocate.”

Life deemed worthy should be the null hypothesis.

Tear down any government division or agency that is an impediment to religious freedom or the pro-life position, don’t make it bigger.

This action rescinds an obama “guidance,” which threatened the first amendment protections against the persecution of religious beliefs.

It does not give the federal government more power. It (hopefully) cements the LIMITATION of federal power against organizations and States who disagree with the baby-parts-selling, corrupt practices of planned parenthood.

My guess is that planned parenthood officials’ heads are exploding as we comment.

President Trump has just declared war on the scum who claim to be “pro-choice.”

The undercover videos and audios of the monsters at planned parenthood, brought to us by James O’Keefe and others, have shed the light of truth on the cockroaches of the left.

i’d be happier if he were signing a bill to eliminate HHS entirely.

there might be a few subordinate agencies worth keeping, under new management, but we need LESS federal government, not MOAR.

If a government bureau isn’t doing the job we want it to do, eliminate it. Don’t add another layer on top of it.

The central fact underlying everything the government is and does is that it’s bankrupt. Quite literally and exactly, it hasn’t been able to pay its bills for sixty years.

Government CANNOT continue to expand and spend, any more than we can power our cars by pouring water in the gas tanks.

So much for free will in America ….
Looks like we are headed towards a Theocracy where religions control our thoughts and actions.
Here is the reason why our ‘right to bear arms’ were written into our constitution:
To fight the dictates of royalty, religion and military……