Texas takes a stand for life

“Texas has stepped forward and shown its unyielding commitment to both protecting life and providing women’s health services,” said Governor Abbott. “The gruesome harvesting of baby body parts by Planned Parenthood will not be allowed in Texas and the barbaric practice must be brought to an end. As such, ending the Medicaid participation of Planned Parenthood affiliates in the State of Texas is another step in providing greater access to safe healthcare for women while protecting our most vulnerable – the unborn.”

Governor Abbott cited the, “gruesome videos filmed at Planned Parenthood facilities,” including one facility in Texas.

Monday, “the Office of Inspector General at Texas Health and Human Services Commission issued a letter ending Medicaid participation for Planned Parenthood affiliates in the State of Texas based on evidence of Medicaid program violations. The cancellation, consistent with Governor Abbott’s LIFE initiative, calls for funding to Planned Parenthood and other abortion providers out of taxpayer money to be eliminated completely, both at the State and local levels,” according to the Governor’s office.

The Office of the Inspector General made the following points:

That Planned Parenthood and its affiliates are no longer capable of performing medical services in a professionally competent, safe, legal and ethical manner.

The termination of all Planned Parenthood affiliates will not affect access to care because there are thousands of alternate providers in Texas including federally qualified heath centers, Medicaid-certified rural health clinics, and other health care providers across the state that participate in the Texas Women’s Health Program and Medicaid.

The State of Texas requests cooperation in informing all clients and potential clients of alternatives where they can obtain Medicaid services from providers in good standing with the State.

Texas based Planned Parenthood Gulf Coast, one of the locations filmed by the Center for Medical Progress, responded to the announcement with a fundraising email. 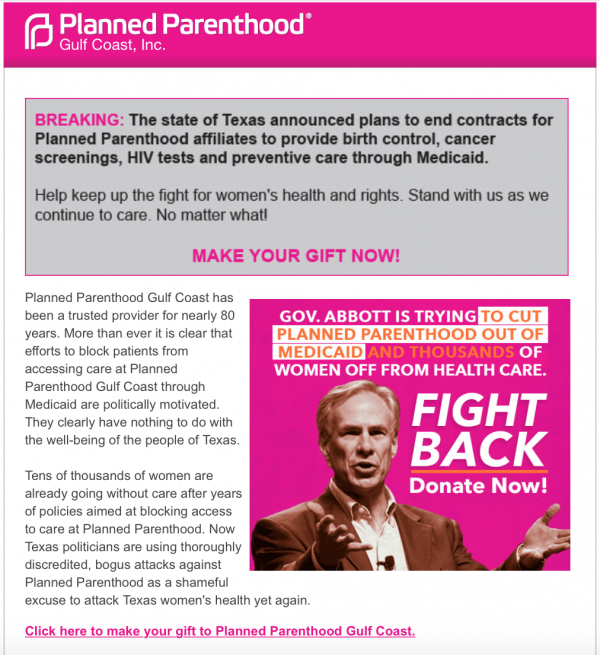 Hahaha. The PP ghouls were caught on multiple videos boasting about how much money they make from selling their “products of conception” (i.e. baby body parts), and how they take care to “crush” the baby’s torso in the right place so as not to damage those valuable “products” (i.e. baby organs).

After they were caught discussing the incriminating particulars of their baby chop shops, PP screamed that “the videos were deceptively edited.” But the entire videos were released, and it was obvious that there had been no “deceptive editing.” But “deceptively edited” was the meme that the media (social and otherwise) picked up and repeated, and now that lie has been repeated so many times and in so many places that PP feels comfortable pretending that it’s true.

Not only that, but the discussion at Reddit (very pro-PP) discloses that PP has delayed, sometimes for “a few weeks” abortions. In light of what we now know, the question needs to be asked whether these delays were for the purpose of securing later-stage baby parts.

Given the testimony in the videos about failure to use anesthetics for the purpose of obtaining body parts and the provocation of an anesthetize, breech birth for the purpose of procuring body parts, serious questions have been raised as to whether PP has been acting in the best interests of the patients (the mother) and whether consent has been properly obtained (for added pain and suffering, to obtain later stage and more profitable baby parts.

I submit that, when an abortion is delayed or anesthetic is withheld for the purpose of obtaining specimens better-suited for research purposes, specific patient consent must be obtained.

OK, if we must have automatic “text correct,” we need to have an edit button.

We know this is going to end up in court. Interesting how it will play out. Science and life issues are not on PP’s side, but will that matter?

Hey, when Jindal got into court, the state of Louisiana had nothing to work with because Jindal didn’t wait for an investigation to be completed. His argument was that the state contracts let Jindal do it ‘just because’. The federal argument is that federal law supercedes the state contracts and says no, you need cause. So, Texas had better bring something to the table besides “We know it when we see it.”

Governor Abbott was AG for over a decade so I suspect he has a game plan for the inevitable litigation.

The left has to take this to court. PP is a two-fer:
1) Corruption – Tons of taxpayer money
2) Eugenics – Margaret Sanger’s mission

Corruption, racism, and no ethical standards is at the core of the left and the democrat party and their flagship PP.

I am OK with that.

Can we have it here in Florida too?

Last year, 34,000 people were killed with firearms, a number which includes 20,000 suicides. On cue, the cries rise up from the left demanding more gun legislation.

Last year, nearly one million children were murdered in abortion clinics across the nation. Silence.

Gov. Abbot has his ducks in a row. I heard a blub from him yesterday, citing unsanitary conditions in PP clinics along with the fetal tissue stuff, and claiming that there were some 4000 providers of woman’s health care in Texas.

Abbott may well turn out to be one of Texas’ most effective governors in modern times. He was terrific as AG and has been leading the way on a variety of issues since taking office.

And… Unlike his predecessor, he hates toll roads which is fine with me!

Not to mention that the PPGC facility that was in one of the films had a “clinic” worker talking about the baby parts coming from a “22” week fetus. Strike one: Texas has a law that limits abortion to 20 weeks.

Strike two: PPGC was also sued in court for Medicaid fraud to the tune of millions of dollars. Instead of wanting to drag their case through the courts (can’t have the negative publicity, you know) Planned Parenthood Gulf Coast settled with the State of Texas and the Federal Government out of court.

Coming up? Strike three. More Medicaid fraud on the part of PP as hinted to by Governor Abbott?

Planned Parenthood merely needs to change its business model so as to fly women needing an abortion to Cuba, which legalized abortion on demand decades ago, and where good, cheap medical care and pharmaceuticals are readily available. Only a cheap airfare away nowadays.