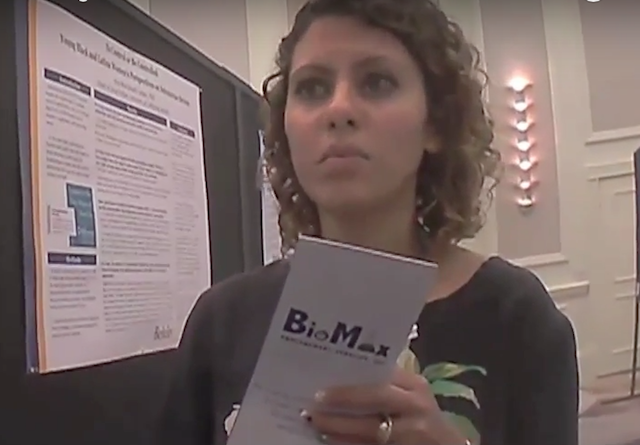 “My aim is usually to get the specimens out pretty intact,” Dermish says at one point.

Dermish says in the video that she does not use the chemical digoxin, used to kill fetuses in the womb, before 20 weeks. She doesn’t say if she uses another chemical during the more than eight-minute, edited clip, and CMP asserts that means babies are delivered alive and killed outside of the womb. Dermish says she has used “ultrasound guidance” to manipulate fetuses for feet-first abortions in the video, a practice CMP describes as a “hallmark” of the illegal partial-birth abortion procedure.
…
“Usually what I do, if it’s a [feet-first] presentation, I’ll remove the extremities first, the lower extremities, and then go for the spine and then sort of bring it down that way,” Dermish says.

Asked about harvesting intact fetal brains, Dermish says she has not been able to do that yet.

“Well this will give me something to strive for!” she says, laughing.

As Fox notes, partial birth abortion (defined as “deliberately and intentionally vaginally” delivering a living fetus where “any part of the fetal trunk past the navel is outside the body of the mother, for the purpose of” killing the fetus) was outlawed in 2003.

The problem here (aside from the monstrous nature of abortion itself) is that, according to CMP, Dermish asserts repeatedly that during this type of procedure she does not use digoxin to kill the fetus pre-extraction, and does not describe how she ensures fetal death before the body is removed. At least in today’s released footage, she goes into detail about how she uses an ultrasound to position the fetus for easier removal, but not about how she keeps the procedure legal.

CMP Project Lead David Daleiden lashed out against the contents of the footage, saying, “Less than 4 miles away from the Texas state capitol, Planned Parenthood routinely practices barbaric partial-birth abortions on living, late-term fetuses. Planned Parenthood’s crimes are not just the result of local bad actors, but are tolerated and even encouraged at the highest levels of the national organization. State-level criminal investigations must press charges, and Congress’ new select committee must pursue a deep and comprehensive accounting of Planned Parenthood’s atrocities against humanity.”

This deserves exposure—and the pro-life vs. pro-choice debate has nothing to do with it. If Planned Parenthood’s providers are providing illegal procedures to patients legally seeking abortion, Planned Parenthood needs to be held accountable to the fullest extent of the law.

Making sure that happens will only bolster the strong—and growing—opposition to Planned Parenthood and the pro-choice movement’s culture of death.

“For you created my inmost being;
You knit me together in my mother’s womb.
I praise you because I am fearfully and wonderfully made;
your works are wonderful, I know that full well.
My frame was not hidden from you
when I was made in the secret place.
When I was woven together in the depths of the earth,
Your eyes saw my unformed body.
All the days ordained for me were written in your book
before one of them came to be”
Psalm 139:13-16 (NIV)