Fumble of the Century Week at Legal Insurrection

Fumble of the Century Week at Legal Insurrection 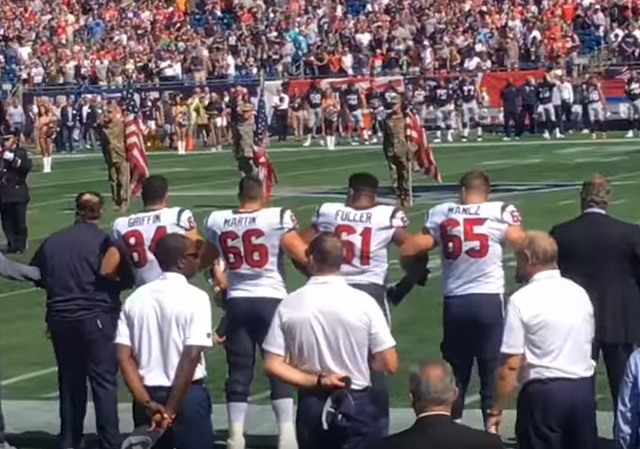 The NFL dropped a lot of their fans this week.

This was also good.

Next on the agenda.

This past Friday evening, a Texas high school coach kicked two players off his team immediately after they disobeyed his direction that there be no protests during the National Anthem.

From the Houston Chronicle: “After the anthem ended, head coach Ronnie Mitchem instructed them to take off their uniforms and kicked them off the team. Mitchem is a former Marine and pastor who started the church-based football program in Crosby six years ago.”

If the NFL had immediately done this in response to the first protest this year, fans would have nodded, golf clapped and the season would be in full swing. Instead, this season is dead and the only question is will the NFL continue to keep its sweetheart tax deals.

“Liberals who you encourage for your ends may well destroy you with theirs.” I heard or read this somewhere along the way, but for the life of me I can’t locate where. Nevertheless, this seems to me to be what has and is happening in so many segments of our society.

One group after another encourages liberals to stand for their cause and use whatever means it takes to achieve the desired ends, yet it the end the victories are short-lived and our society as a whole suffers greatly. The situation is made worse as those opposed to the liberals are likewise tempted to use ill-advsed means, ones which may undermine what they claim they stand for, to achieve their ends. And, so the cycle continues …

And most people, me included, thought the NFL was invincible … even with an idiot commissioner.