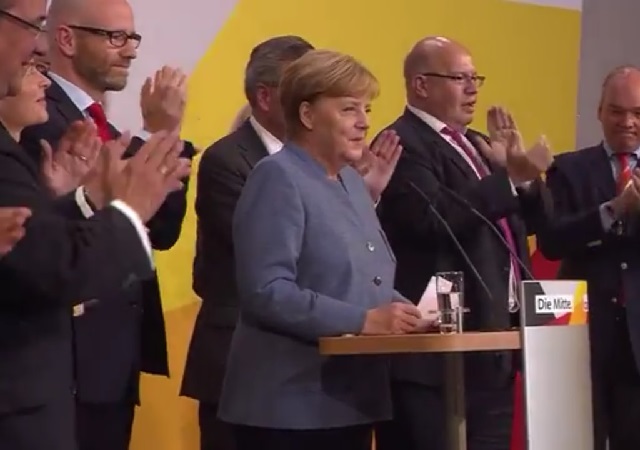 The White House may have been trying to gloss over the issue of frosty ties between the two world leaders, but as far as Chancellor Merkel is concerned: this isn’t much of a victory and there isn’t much to congratulate about.

Merkel’s Pyrrhic victory comes at a great cost to her Christian conservative party (CDU), which registered its worst performance in nearly 70 years — getting just above 33 percent of the vote. Merkel’s desire to extend her 12-year-old reign also pulverized her junior coalition partner, the Social Democratic Party (SPD), in many of its traditional working-class bastions. At 20 percent, the SPD, Europe’s oldest socialist party, also clocked its worst performance since 1949.

The biggest winner of the Sunday’s election was the right-wing AfD party. The newcomer secured 12.6 percent of the vote, getting over 21 percent in eastern German states. With 90 members of parliaments, the AfD is set to form the third largest group in the German Bundestag.

The AfD’s election success is part of the larger European trend. In wake of the Migrant Crisis, right-wing nationalist parties have emerged as natural opposition to the establishment politics throughout Europe. The Party of Freedom (PVV) in the Netherlands, Front National in France, and Freedom Party (FPÖ) in Austria are largest opposition blocks in their respective parliaments.

The New York Times is correct in its today’s assessment that the AfD’s “gains in Germany will now complicate not only the calculations of Ms. Merkel, the de facto leader of the European Union, but by extension the path ahead for the entire bloc.” The Times is also correct in calling Merkel “the de facto leader” of the EU. France’s President Emmanuel Marcon has long abdicated the Franco-German European project to Merkel for all practical purposes.

Marcon, however, needs German financial muscle to pull his country out of the current economic rut. The French leader is proposing “a separate budget, a finance ministry and a European monetary fund for the eurozone.” This would give France and southern European countries a chance to balance their failing budgets at the cost of German surplus. Much to the joy of unelected bureaucrats seated in Brussels, Macron’s plan also means taking economic decision making away from the sovereign national governments and handing them over to the EU Commissars.

Right-wing party’s presence in the German parliament makes it difficult for Merkel to extend bailouts and financial concessions to other European countries in the name of “saving Europe”. The nationalist AfD will be more than happy to throw a wrench into Merkel’s plans, especially if it means disrupting the EU.

As the UK newspaper Financial Times reports today, cash-strapped Macron will be “press[ing] case for eurozone reform despite Merkel setback”. According to the newspaper, “French leader seeks to influence German coalition talks with integration plans.” But whatever Macron wants, he won’t be getting it anytime soon. Coalition talks could take longer than most pundits would like to admit. German broadcaster Deutsche Welle writes:

Will Santa Claus or the Bundestag’s first “Jamaica coalition” come first? The answer is still in the stars, but all three parties have signaled their willingness to compromise before the first round of negotiations. For Merkel, it is about forming a stable government. If no CDU/CSU-Greens-FDP coalition were to come to fruition, all eyes would be on the Social Democrats (SPD), who would then be asked to reconsider their “no” to a new edition of the so-called grand coalition.

The “Queen of Europe”, as the subservient German state broadcaster Deutsche Welle likes to call Merkel, could once again rope in the socialist SPD for build the coalition government. This would catapult the AfD to the leading the opposition group in the country’s parliament.

Four more years of Merkel will also mean four more years of open borders. This would mean more Islamist terror, migrant crime  and popular unrest across Europe. But don’t expect Merkel to limit the benefits of her wisdom and influence to Europe alone. Earlier this month, she had proposed an “Iran-style” deal for North Korean Rocket Man Kim. This would be an irony in itself, considering the fact that Merkel was instrumental in offering a North Korea-style deal to Iran in the first place. The British newspaper The Guardian reported:

Chancellor says deal with Tehran could be a blueprint for a process in which Germany and Europe would play a very active part.

Angela Merkel has offered German participation in any future nuclear talks with North Korea and suggested that the 2015 agreement with Iran could serve as a model for negotiations. (…)

“If our participation in talks is desired, I will immediately say yes,” Merkel [said]

Merkel’s victory will further galvanize popular democratic movements across Europe. This could enable anti-EU, anti-mass immigration parties to take power in one or several EU member states, triggering a disruption of the Brussels bureaucracy and the liberal European-project.

If, however, a real political change doesn’t take place anytime soon, European politics in the age of mass-migration won’t mean more than rearranging the deck chairs on the Titanic.

What Four More Years of Merkel Mean: Continued widespread use of eye bleach?

It’s a real shame she won. I was really hoping for her to lose. The AfD victories are good, but it won’t be enough. Millions of Muslims will continue to pour in to Europe over the next four years with Merkel still as chancellor. With their birthrates, there will be no getting them or their spawn out. Europe is done for.

notamemberofanyorganizedpolicital in reply to buckeyeminuteman. | September 26, 2017 at 2:02 pm

Hey, you can do almost anything with enough election fraud. Snark!

Merkel does not know it, but this election tolled the “death bells” for her and Germany.

She “won” because politically, Germany is completely fractured.

But it’s been pointed out that as per these election results, Merkel now has LESS support inside Germany than Trump has in the U.S.

Merkel remains Chancellor but any ability to maneuver domestically was shattered. And, with the US, Britain and NATO going away – Germany is left with an army with 200 front line tanks and the 5th smallest Navy in the Baltic that cannot effectively deploy anywhere.

The European Union faces a debt crisis, a currency crisis, a banking crisis, an immigrant crisis, a Russian crisis, a Turkey crisis, an energy crisis and an export crisis. And, they are sitting on a demographic time bomb that will pretty much turn them from a Capital rich economy into a Capital poor economy in the next 7 years.

If nothing in Europe is constant, it’s war.
Here comes another one.

For a while, it looked like Germany would invade Poland again.

The other thing constant in Europe is anything to remove or kill Jews.

There was a Halloween episode of the Simpsons where they kept importing one pest to get rid of the previous import.

Newflash,Newsflash: for a while it looked like Germany would invade Poland. (Die Zeitung 09/09/1939). And the constant persecution of jews, please that’s old news too, and of course, everyone even if they don’t knoww it is an antisemite. Please note that the choosen people of god are establishing a great holocaust in the promised land, not the other way around.

notamemberofanyorganizedpolicital in reply to MattMusson. | September 26, 2017 at 2:03 pm

Plus the worst of all – a demographic crisis.
You can’t have a country (for very long), if you don’t have kids.

Which is the fundamental reason Merkel and her allies are importing all of the jihadis, hoping that they will turn into good little workers who will keep the German’s pension system afloat.

It’s hard to even name all the ways in which that plan is guaranteed to fail.

Oops! Should be name not names.

Right-wing party’s presence in the German parliament makes it difficult for Merkel to extend bailouts and financial concessions to other European countries in the names of “saving Europe”.

Merkel’s next position should be inmate.

Merkel is doing for her party what Obama did for his, and for many of the same reasons.

Macron’s hopes of getting money from Germany are not much more realistic than Merkel’s desire to get ersatz German worker bees from the Middle East. Germany’s own debt situation is ruinous—slightly better than the US, and much better than France, Italy, Spain, Greece, or the UK, but it’s still in a hell of a hole.

What will four more years of Merkel mean?
Another 3 million refugees.

In the past one hundred years, only Adolf Hitler and Kaiser Wilhelm II have done more harm to Germany than Angela Merkel.