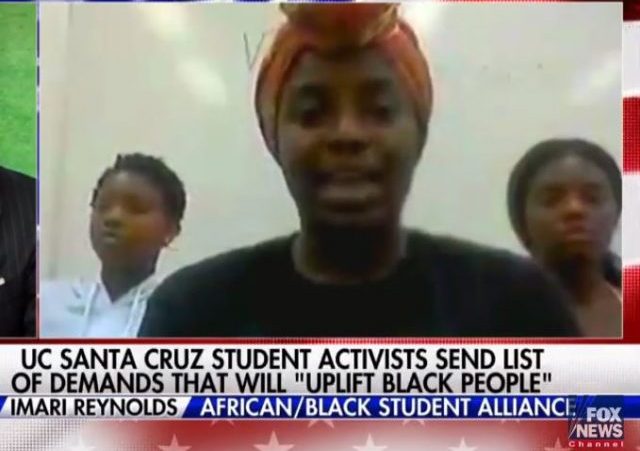 Accepting punishment for your actions is also a big problem.

When are students going to demand free speech on campus?

The problem is everywhere.

Where are congressional Republicans on this?

A study in campus partisanship.

The revolution will be blogged about.

The fact that UC Santa Cruz acquiesced to every demand of the students reminds me that we have a very visual (and visceral) template of how the progressive hard-left sees life SHOULD BE in their utopia.

I’ve said for a while that we only need to look at the typical college campus to see most progressive cultural “tests” in action. And the core of the philosophy can be boiled down to “controlling who in society has power and how much power.” There will probably be an endless supply of newly defined groups to assign victimhood and to perpetuate this practice of “equalizing” power between groups viewed as powerful and those seen as victims.

With the anti-Trump hysteria, it will only get worse. Not for valid reasons. But because it empowers progressives to imagine new forms of power aggressions (purely imagined to be clear), and the media will comply by drawing more attention to them as if real.

The only question that remains is if or how long before it really gets a final foothold culturally. In the academe it is flourishing because every administrator is fully progressive (it seems) and has near absolute ability to exercise the strategies. Neither the donor class nor the students who keep applying seem to have any concern.

notamemberofanyorganizedpolicital in reply to casualobserver. | May 6, 2017 at 9:40 am

I didn’t know it was Halloween again already, did you?

But I see by the ugly masks in this article’s pics, that it must be Halloween again – if only in the Lost State of California.

Q: Do you know what happens when you give in to the demands of small children who scream and carry on?

A: The same thing that happens when you give in to the demands of large children who are screaming and carrying on. You get more of the unwanted behavior.

Anybody want to start a pool on how long it will be until the next group at UCSC takes over a building and issues a list of ‘demands’ for the administration?

Most of the people involved in the campus assaults, riots. anti-Semetic slurs and outrageous demands do not meet any definition of “students.” Stop referring to them in that way.

They have no desire to learn. No desire to improve themselves. They just want the rest of us to take care of them forever, while they have the right to insult and attack us every inch of the way..