Disruption as a tactic moves to the forefront of campus war on Israel. 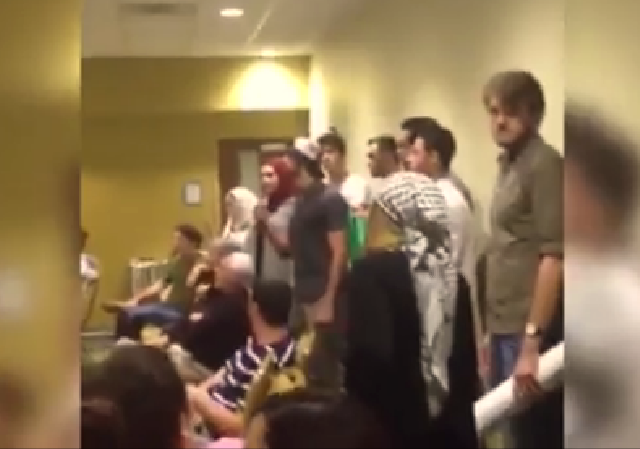 The anti-Israel Boycott, Divestment and Sanctions (BDS) movement always has used disruption and intimidation on campus as a tactic to initimidate Israeli and pro-Israel speakers and students on campus. Students for Justice in Palestine (SJP) is a leader in this regard, but hardly alone.

There have been two developments in the past year or two.

First, using the intellectual pretext of “intersectionality,” anti-Israel coalitions are build based upon (i) explicitly racial criteria of opposing “white settler colonialism,” and (ii) co-opting unrelated social justice causes, such as Black Lives Matter and even rape crisis groups.

Second, as reflected in our reporting and a recent study, disruption has become the preferred tactic, as divestment and other such efforts prove futile even when passed by student governments. Just today, for example, a boycott resolution which had passed the McGill University student assembly was voted down in an all-campus vote, Anti-Israel Boycott Resolution goes down in flames at McGill University.

We have reported on several such recent disruptions, including at University of Minnesota Law School, UT-Austin, Kings College (London), U. Windsor and an LGBTQ Shabbat Event in Chicago. Even events that are not disrupted are protested, such as the appearance of actor Michael Douglas and human rights hero Natan Sharansky at Brown University

The purpose of the disruption is to make it uncomfortable to express pro-Israel feelings in public on campus. And on many campuses, such as Vassar and Oberlin, pro-Israel students are silenced for fear of being singled out. Pro-BDS faculty put their thumbs on the scale by co-sponsoring blatantly anti-Israel events.

Now we have another example of the disruption tactic.

At the University of South Florida, a lecture by two Israeli army reservists was disrupted by protesters. (Since most Israeli Jews serve in the army, most 20-something Israeli Jews are “reservists” after active service ends).

A group of BDS supporters disrupted a lecture by two Israeli students at the University of South Florida earlier this week….

The Israeli students, Shir and Yitzhak, gave a lecture to American students on behalf of StandWithUs, an organization working for Israeli hasbara (public relations) abroad, in order to “present the humane side of the IDF.”

During the lecture on Wednesday, some 25 supporters of the boycotts, divestment and sanctions campaign against Israel entered the lecture hall waving Palestinian flags and banners, interrupted the lecturers, and shouted at them.

“As part of the organization’s (StandWithUs) program, IDF reservists go abroad and tell their personal stories,” said Shir, a student of Political Science and Communications at Tel Aviv University, who served in Military Intelligence.

“When we got to the University of South Florida, we encountered serious disturbances. Two minutes after I started talking, the Palestinian activists got up and left, and then came in again, and left again. They tried to interrupt us in whatever way they could. They came in with Palestinian flags and banners. They had no interest in having a dialogue with us.”

Yitzhak, a civil engineering student at the Technion, added: “They had no interest in listening to us. They didn’t stop going out and coming back in, in an effort to interrupt, and when one person got up during the Q&A and started with ‘I respect you,’ one of the activists called out ‘How dare you say this?’ and shouted at us, telling us we’re murderers and child killers. Police forces that were there had to take him out….

Shir added that “When we left and walked to the cars, they waited for us outside. A group of people holding banners and flags and shouting at us: ‘Murderers, immoral, terrorists, how do you sleep at night?’ Police had to escort us to the car.”

There was another disruption almost simultaneously at Florida International University, where anti-Israel protesters stated a walk-out on a speech by Israeli U.N. Ambassador Danny Danon:

A group of pro-Palestinian activists walked out in protest while Danon was speaking about the situation in Gaza. “Hamas in Gaza is planning for the next conflict with Israel, building attack tunnels and purchasing weapons technology and rockets,” he said. At this time, the students left the room while wearing keffiyehs and raising a fist in protest.

While less of a disruption than at U. South Florida, the point of the BDS protesters is to make sure there is some sort of disruption when Israelis appear on campus.

You cannot view these disruptions as isolated to Israel. Just ask Ben Shapiro, Milo Yiannopoulos or Christina Hoff Sommers, who have had lectures disrupted by the angry Regressive Left.

This trend towards campus intimidation and lecture disruption started by targeting Israel, but it doesn’t end there. It never does.

Student government have no business whatsoever deciding investment decisions. This is beyond their scope of properly defined action. They don’t have the expertise or even the historical experience to to give useful input. They can and should have input with respect to the normal things that are actually in the interests of students. These entities should have a well-defined purpose, which should be adhered to.

this ^^^ it needs to be well documented …
and enforced. the school admin needs to be
the parent .. oversight … guidence

These loons don’t normally clump in groups large enough to be more than a nuisance. When they achieve critical mass like at a college you get problems like this and other leftwing idiocies. The goal should be to keep them from having any influence or voice anywhere.

I don’t think they want influence–they want control. Influence would require the intelligence to construct and present a cogent argument which is beyond their capability and in many cases impossible when built on lies, gratuitous assertions, and logical fallacies.

You are right that their power comes from reaching critical mass. Too many idiots concentrated in one place (a University) is dangerous to the adults paying for the University.

The Florida Legislature will pass two bills (HB 527/SB 86 and HB 1001) during this session that prohipits the state and local municipalities in the state of Florida from entering into contracts with businesses that boycott Israel.

Disruption as a tactic needs to be met with expulsion from school. Don’t exempt the Islamic terrorists from expulsion.

Is that just shadow under the nose of the dude in the brown shirt or a hitler style snot catcher??

These students (isn’t a student one who studies?) are in desperate need of an education. If I identify a tree by its fruit, I conclude that an intelligent and knowledgeable person is an educated (whether formally or informally) person. If I see these stupid “students” saying and doing stupid things, I conclude they are ignorant and uneducated. Their degrees notwithstanding.