Despicably accuse her of supporting rapists 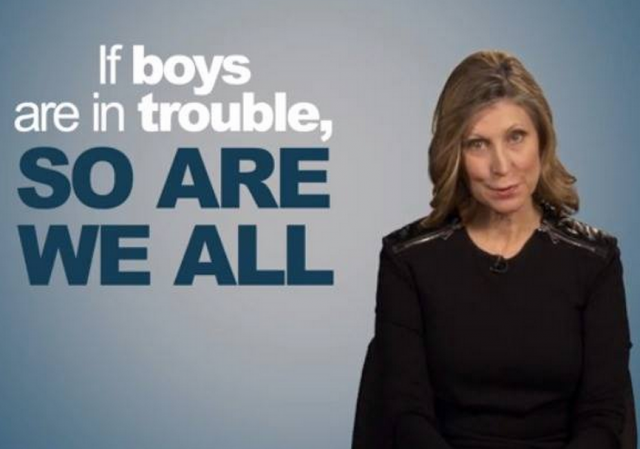 Ms. Sommers is the Factual Feminist at the American Enterprise Institute.

In the Oberlin Review radical feminists responded to Sommers’ upcoming speech with an OpEd, “A Love Letter to Themselves.” In this love letter, they accuse Sommers of being a “rape denialist” and proceeded to list her “offenses” to feminism.

The event’s Facebook page is hilarious. It would seem not everyone at Oberlin College believes Mr. Sommers to be a feminine anathema. 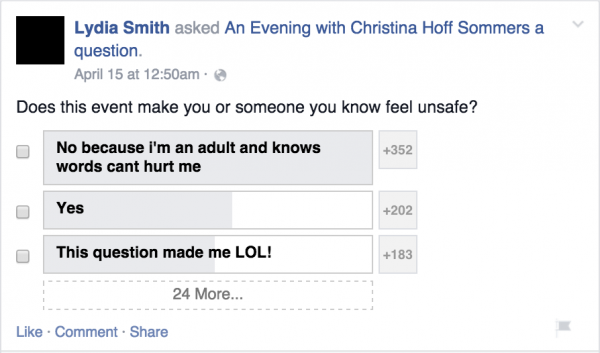 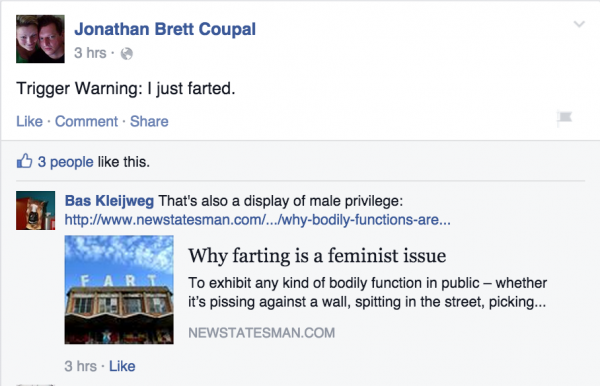 So how is Oberlin College taking Ms. Sommers’ speech? At least for the radical feminists, not well.

Oh! Action! Announcements of where the the safe spaces are!

-20 min to curtain. A Policy of Dissent is disseminated. pic.twitter.com/DZ0yuroLXM

Oberlin students sitting in the audience with tape over their mouths. I haven't heard @CHSommers support rape yet. pic.twitter.com/tITd0csguv

Doctor Sommers spoke some facts to a rough room tonight.
I got a couple of souvenirs.
(@CHSommers) pic.twitter.com/dJJ9hZSLuj

This must have hit them hard – Heresy:

.@CHSommers addressing the different additudes bt men and women when it comes to the workplace. Some women choose to raise families.

UPDATE: How did Sommers react to all this? Quite well:

After Oberlin talk went out for drinks.Some protesting feminists came along.Intense but civil discussion until 1:00 AM. Parted as friends.

At some point we will have to call it a “Hair Trigger” warning because they will argue it is legit and legal to shoot us just for having a divergent opinion.

You can’t call it that. I have thinning hair, and anything that reminds me of it makes me begin to shake uncontrollably, lose control of my bowels and immediately seek the nearest “safe place.” Oppressor!

I wish I could repent of my thin.

No, really. I want my hair back too.

But..but…but Oberlin feminists will accuse you of being a rapists for wanting your hair back!!!!

A pubic hair trigger, if you want to be accurate.

Dignifying the comments of these lying, sexually frustrated jackasses isn’t worth the effort. Ganging-up to get them fired from positions of any authority works much better.

No means no. Every girl has business to learn how to say “no” and how to be clear in her own mind whether she wants to say “no,” or not. That clarity of mind is a girl’s best protection.

PS. We all know that use of force, or slipping somebody a roofie, is a crime.

How dare half of the human population expect equal protection, including a presumption of innocence. The audacity of men to expect the same human and civil rights is simply beyond the pale.

Pro-choice religion is not only selective but sincerely prejudiced, and bigoted. These women need to holster the hatchet — and preferably the scalpel, too — before we lose tens of millions more unwanted and inconvenient human lives to progressive corruption.

Modern feminism has nothing to do with equality; It is a female supremecy movement. It considers women to be inherently better than men and it wants all laws rewritten to reflect this attitude. Its adherants will destroy any man or woman who steps between it and this goal.

man, woman, or institution, such as the military.

The aisles would be littered with dead baby ewes. Vaporized…to death.

I would pay good money to see Ms. Paglia and Ms. Sommers on stage together at a women’s college.

For years I have been describing Paglia (to acquaintances who don’t know her) as my favorite lesbian. Can you picture her with Ann Coulter doing a tag team match with the harpies? There would be blood splatters everywhere!

I bet the AFW would go for that!

You don’t see this crap except at universities. It’s a symptom. The disease is leftist indoctrination.

And on the interwebs. This kind of hysterical crazy has a natural outlet on the ‘net and social media.

And it IS crazy, as TheOtherMcCain has demonstrated from the profiles of a lot of these carlins.

Plus, women should be in the Infantry.

Women should be registering for the draft!

Agree with us or you’re a sexist!

Get used to that meme. It’s going to get a lot of use over the next two years.

The guidelines, they say, are neither comprehensive nor absolute.
I wonder how they will be interpreted?

“Garbage in, Garbage out.”

Take heart, dear readers. This crap only flows on campuses and nearby coffee houses. Move a dozen of these princesses to try this shit in Paducah, TX or Sharpsburg NC and see what happens. They’d laughed out of town.

It only happens on campuses because the only authority over students like this, who might intervene with some sense, is the very faculty and administration that indoctrinated them in the first place. Those leftist admins are sitting back thinking, a la Montgomery Burns, “these fools have demonstrated they will promote any nonsense we tell them too… excellent!”

Well, agreed as to places where daily life is close to reality, but there are hives where these people flourish OFF campus, such as Sand Franciso, Potland, Nuevo Ork, etc.

In such artificial and rarefied environs, these crazies can live, hate, and die after a long and unreproductive life. I was reading that the publishing business has trended all female in recent years. Which ain’t good.

Perhaps one reason these types are so bitter is that just as the publishing industry became dominated by women it also began a long slow death march due to the rise of self publishing.

Just so. I published a technical book in 1989-90, somewhere in there, with traditional publishing of the time. Recently, I tried to shop a book manuscript and…. it has all completely changed. I’m researching Kindle self-publishing now.

Ragspierre, you inspire me to sing!

The Democrats’ stealing is up, and the Profits are down!

In any other venue people would be saying “Alcohol was involved, clearly”.

Doesn’t speak well for Oberlin as an educational institution.

Having a mob of students unable to reason and analyze opposing ideas isn’t much of an educational output.

Nor is piecing an article out of accidental fragments.

Oberlin is an educational institution? Who knew? It’s for the ill right?

When I read about things like “A Love Letter to Themselves” and women taping their mouth shuts I can’t help but remember when John Irving’s The World According to Garp 1978) was seen as a work of parody and satire. It thirty five years later it now has become a work of dystopian futurism.

The one thing Irving got wrong is that the future’s equivalent to the novel’s Ellen Jamesians don’t cut out their tongues in misguided solidarity to rape victims. Instead they stop up their ears.

What a horrible thing to do to college students.

I think this is highly analogous to the “repressed memory” horrors of few decades back.

The appalling convictions of people in “day care center” child abuse cases, where victims were all over the map.

Of course, the people wrongly convicted of horrible crimes were victims.

But the ones we don’t think of were the kids who had “memories” implanted in them of being sexually abused are the ones I think are most tragic. Those false memories are perfectly real to the now-adults who live with them.

In the case of these poor, stupid hysterical “feminists”, their self-induced traumas will bend their entire lives…barring some REALLY amazing help.

You could make that more pithy…

A lot of therapists with agendas did a real disservice to people who were often already dealing with issues of alienation from family members. Worse, if the patient said nothing like that happened, the modern day witch doctor often told them they were in denial and wouldn’t get better until they admitted what had happened! I had a run in with one of those who was determined to get me to say my late father was a pervert.

I recall reading about a woman who came away from just such a therapist convinced her uncle had molested her as a preschooler. Her mother had an explanation for those vivid memories under hypnosis. At age four, the woman had been taken to see a physician who had a beard much like her uncle’s and he treated her for a bladder infection. What she remembered under hypnosis as being molested was probably being catheterized during the treatment. Had she not been on speaking terms with her mother, she would have been convinced she’d been the victim of child molestation.

You got it! They had and have “agendas” and maybe a new book to hype, or a seminar to hype or……

“Free speech means the government can’t censor you; it does not mean we have to tolerate your misogyny.” So, “free speech” does NOT mean that we have to “tolerate” someone else’s opinion. That’s the liberal interpretation of “free speech.”

Free Speech means you have the right to hear and be offended by the beliefs of others.

Telling people to “Shut up” or “Trigger Warning” is censorship, it is not free speech and that type of censorship is not protected free speech or legally protected anything…….