Anti-Israel students scream at Israeli Studies Prof. Ami Pedahzur as he urges them to participate in event. 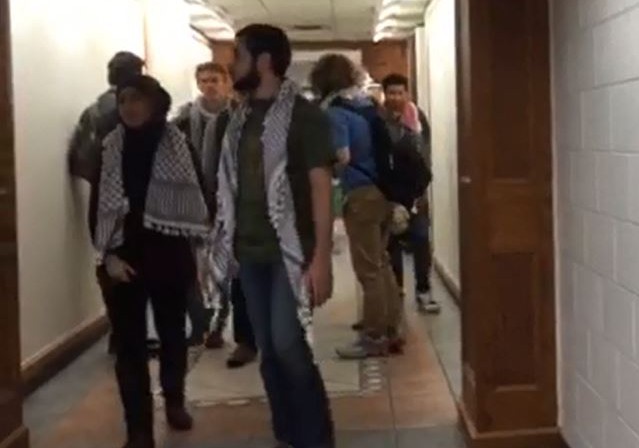 Yesterday morning we posted about an incident at UT-Austin, in which protesters from the Palestine Solidarity Committee (PSC), led by law student Mohammed Nabulsi, disrupted an event hosted by Professor Ami Pedahzur of UT’s Institute for Israeli Studies.  The invited guest speaker was Dr. Gil-Li Vardi from Stanford University.

Since then, the dispute has gone national with attempts by PSC and its supporters to get Prof. Pedahzur fired based on an edited video released by PSC. 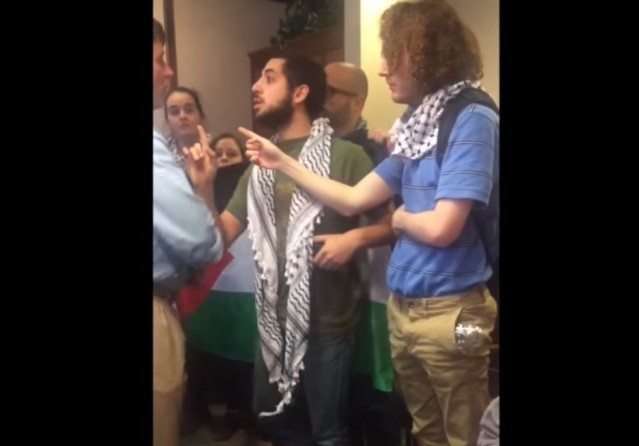 The edited video, however, shows the protesters refusing to leave or to participate, and instead shouting down others and chanting “Long Live the Intifada.” The Intifadas have been the bloody series of uprisings which included suicide bombings (the Second Intifada which led to construction of the security barrier) and the current Knife Intifada which is ongoing. They also chanted “We want ’48, we don’t want two states” (a reference to the desire to undo the creation of Israel in 1948).

The edited PSC video does not show, contrary to PSC claims, an assault by Prof. Pedahzur; rather, it shows him trying to get the protesters to stop the disruption and to participate in the event.

Legal Insurrection has obtained exclusive video of the end of the event from the hallway outside which backs up Prof. Pedahzur’s account.

The video starts with the chants (shown at the end of PSC’s edited video). As the protesters move outside, they scream that pre-Independence Jews cooperated with the Nazis, and then they continue their chants. Prof. Pedahzur exits the room into the hallway and again asks the protesters to participate in the event, but they just scream at him some more.

The police then arrive, and the protesters continue screaming.

This is crucial evidence, because the protesters are claiming there was an assault and an unwillingness to hear their views. But in fact Prof. Pedahzur urges them to stop screaming and to participate.

This video again shows the protesters as being purely interested in disruption and interfering with the event.

The UT-Austin academic leadership will have to decide whether it will continue to tolerate disruption of speeches and events through mob rule.

Call them on their lying. Every. Time.

The lying and intimidation are part of the advertising campaign under the Hamas Covenant.
http://middleeast.about.com/od/palestinepalestinians/a/me080106b.htm

Notice that, like Hamas, when a Jew fails to deliver adequate provocation, BDS will make it up, just like they have converted an invitation by a professor to engage in discussion into a false claim of assault.

Objective truth is a potent weapon, and to the extent other Muslims have been exposed to the real behavior of Hamas and its other Muslim Brotherhood cousins, worldwide support for Hamas has ebbed. It has not ebbed fast enough, for my taste.

This is like saying, “Unicorns who really want to study electrical engineering…”

And All Americans think alike, too. /s

When your ideology teaches it’s okay to lie to advance its cause, people tend to think you’re lying when you don’t follow the program. Usually, they are right.

The Koran doesn’t have much to do with peace either.

Elizabeth Jeneault (press) wrote on UT “Palestinian facebook page contact me I’m a reporter with TWC News. Looking to get in touch with you guys ahead. Call me at your earliest convenience at (315) 427-1498. ” You must contact her

This behavior cannot be allowed to continue. Universities need to adopt strict rules with harsh sanctions that include suspension and expulsion.

Such disruptions need to be prosecuted as civil rights violations as they deprive the event organizers of their right to free speech. Is there a reason why the disruptors and their sponsoring organizations could not he sued into oblivion?

Those students should be expelled.

Expelled with a serious headache.

They are students . expell them and send them to their mideast homes.

If you notice where all of the anti Semite actions have taken place there is a large muslim population. They are the world’s anti Semites. How much longer are the progressives going act like these are poor mistreated people and face up to the fact that most of them have a long range agenda that is the domination of the world. I am not sure there is a thing called a “Moderate” muslim.

There are no moderate Muslims. There are only Muslims who have not yet begun to make jihad warfare.

Just because they aren’t doing so violently, yet, doesn’t mean they are not active supporters.

Violent terrorism, on this scale, could never exist without the active and eager support of the entire culture.

Peace will come when the Arabs love their children more than they hate us.
Golda Meir

But waitaminute! I thought the Professor had them surrounded.

Reminds me of the joke during the 7-day war:

Not exactly a fan of wikipedia but…

National flags are potent patriotic symbols with varied wide-ranging interpretations, often including strong military associations due to their original and ongoing military uses.

I am all for Freedom Of Expression, but people waving other nations’ flags make me angry.
This is The United States Of America.
There’s only ONE flag that represents this nation.
And this nation is way too generous to those who come here to invade, to trash talk, denigrate and subvert the American society.

“The UT-Austin academic leadership will have to decide whether it will continue to tolerate disruption of speeches and events through mob rule.”

Is there the slightest chance they won’t?

These “students” deserve to be expelled. They won’t be. At a minimum suspended for a full semester. That won’t happen either.

send them a Whitman sampler.

I’m all for “Freedom of Speech”, “Freedom of Expression”, and the Right to Peacefully Protest–but when it infringes upon another persons RIGHTS to the Education they are paying for, or their Rights to NOT Be Harassed, there is a line that is being crossed!!
Disruption of classes, and a persons studies should result in one of, or all three things–
1.)Suspension from the College/University.
2.)Subject to arrest.
3.)The cost of one days class, multiplied by the number of students, divided amongst the “offending students”–with the bill being sent to the “offender’s parents”.
**Perhaps the “parental units” would have some ‘input’ with their budding jihadists!

It seems that this video was shot AFTER the professor got in the face of the protesters.

It also seems that no one here understands what activism and protest entails, often it includes the disruption of an event.

Public universities are recognized spaces for academic and political debates and student activism, whether it meets your criteria for what is acceptable or not really doesn’t matter–the students went to have their voices heard, and they did.

The professor is the one who couldn’t keep himself from bowing up like a prize fighter.

The interruption occurred during a voluntary event, not a class, thus the students in attendance didn’t lose any money. These are not part of their tuition.

The assault claim has nothing to do with anyone’s Facebook names.

“The UT-Austin academic leadership will have to decide whether it will continue to tolerate disruption of speeches and events through mob rule.”

This would mean outlawing any form of student organizing on campus, and that’s not going to happen. Freedom of expression applies to everyone, whether you approve of their ideology or not.

This is like saying, “Unicorns who really want to study electrical engineering…”

“send them a Whitman sampler.”

Quite the following this blog has.