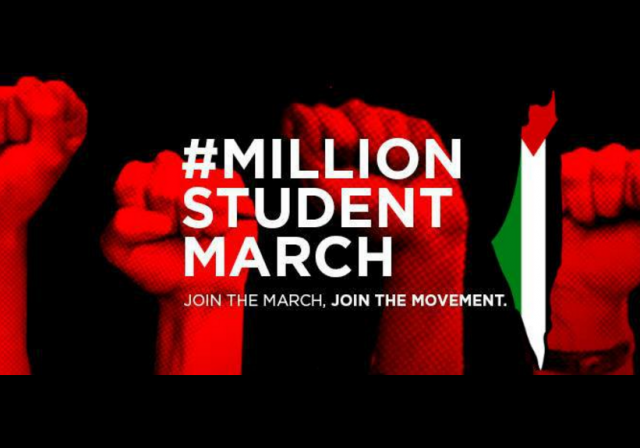 Students for Justice in Palestine is a national organization with dozens of campus chapters, and growing.

SJP has been the subject of numerous posts here because of its highly aggressive, sometimes blatantly anti-Semitic, antics, such as when Vassar SJP spread a Nazi cartoon and UC-Davis SJP taunted Jewish students with chants of “Allahu Akbar.”

We also have noted how SJP groups are at the forefront of attempting to hijack Black Lives Matter groups and to inject anti-Zionism into the Black Lives Matters movement by co-opting protests, such as in Ferguson, Baltimore, and New York City.

Those two elements — hijacking protest movements and trying to redirect them against Israel — came together this week when a coalition of New York City area SJP groups taunted the administration of the City University of New York with claims that tuition increases were tied to the “Zionist administration” of CUNY and investment in Israel.

The Tower and Tablet Magazine have extensive reports.

The call was issued on a Facebook page for the anti-Zionist protest in the name of and endorsed by:

Here is the page: 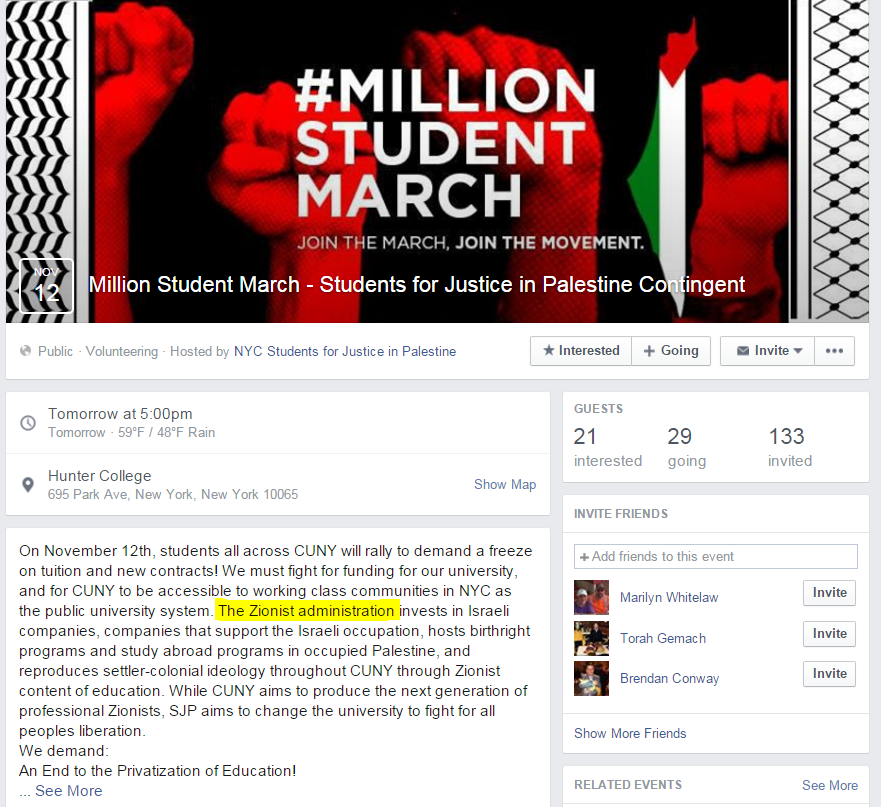 As is now a pattern, anti-Israel groups attempt to co-opt unrelated issues into one broader theme in which they include anti-Zionism. The Facebook announcement reads:

On November 12th, students all across CUNY will rally to demand a freeze on tuition and new contracts! We must fight for funding for our university, and for CUNY to be accessible to working class communities in NYC as the public university system. The Zionist administration invests in Israeli companies, companies that support the Israeli occupation, hosts birthright programs and study abroad programs in occupied Palestine, and reproduces settler-colonial ideology throughout CUNY through Zionist content of education. While CUNY aims to produce the next generation of professional Zionists, SJP aims to change the university to fight for all peoples liberation.

An End to the Privatization of Education!

An End to Racial and Economic Segregation in Education!

A similar declaration was issued at the website of NYC SJP, the group which has complained that SJP and the BDS movement is not aggressive-enough. 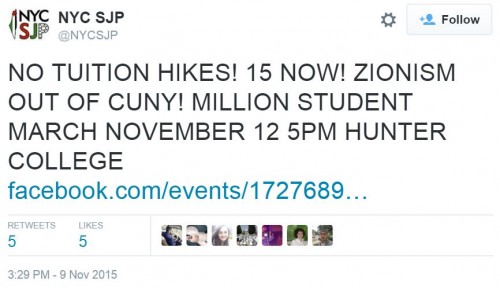 NYC SJP leaders were at the forefront of the protests, leading protesters to call for an Intifada Revolution: 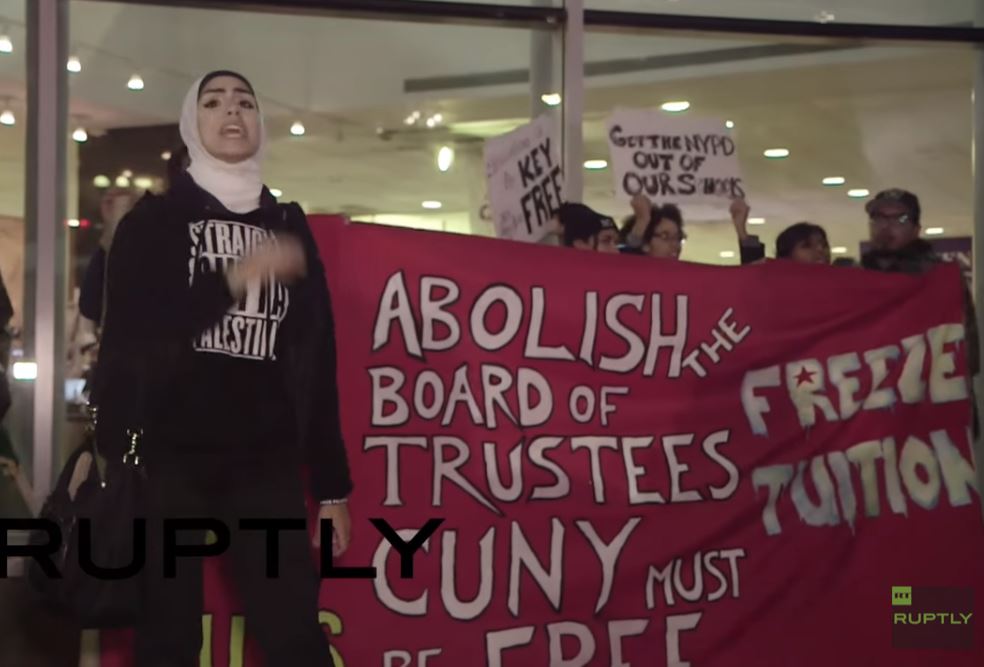 [“There is only one solution, Intifada Revolution”] 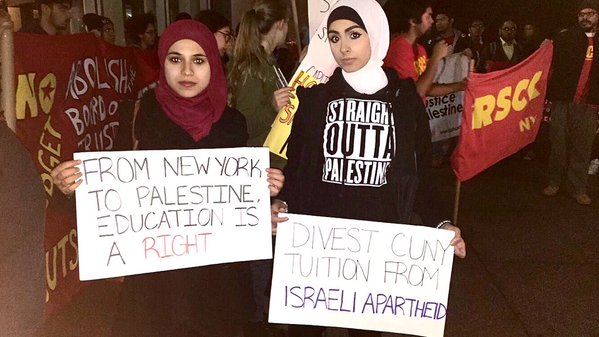 They led chants of “Zionists out of CUNY” and “Long Live the Intifada.” (h/t Yair Rosenberg)

The CUNY administration issued a statement condemning “thinly veiled bigotry, prejudice, anti-Semitism.” The CUNY official who issued the statement has not responded to our request for comment.

It’s not enough. There was nothing “thinly veiled” about the SJP attempt to stoke anti-Jewish sentiment and to exploit it in the name of anti-Zionism.

The mask has slipped, once again, from SJP.

The Zionist shark SJP jumped is every bit as real as the Great White jumped by Jew Henry Winkler.

LukeHandCool (who, in all candor, really feels SJP is the shark. The only shark known to self-chum)

Crazy people (who make themselves crazy by their choices) are fair game for crazy terrorists. Predators will prey on easy targets.

There’s no fixing it. We can only fight the crazy.

When in doubt, blame the Jooz or blame Booosh–easy, non-moving targets!

Saw the posters in some images for this.

Glad you posted. SJP and BDS needs to be stopped.

All this hate masquerading as “tolerance” and “justice”…. It sickens me.

The Students for Justice in Palestine contingent must appropriate other causes because their cause lacks credibility. These appropriators are so much like the whiny self-centered Millennials.

I am still trying to find what Palestinians have given this world other hatred and rancor.

100% of 1% money plus the Zionists….duh, it will all work out if they pay everything they have for everything “we” want.

Useful idiots are the last ones to know that they are being manipulated. Nothing like organizing a march only to have it taken over by another group. Gee, if only these kids knew history. This is how revolutions work. The end result is tyranny.

“The arc of social justice bends towards having a revenue generating football team.”

—LukeHandCool (with inspiration from President Obama and the campus snowflakes)

BYU is sounding better and better even for non-Mormons.

An End to the Privatization of Education!”