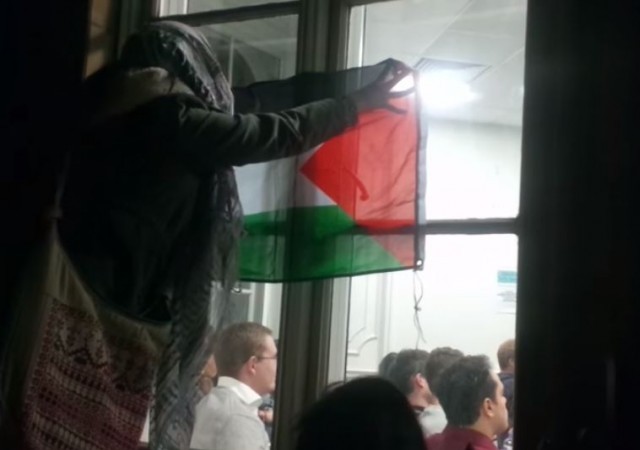 For several years we have been documenting the increasingly aggressive tactics of anti-Israel protesters on campus.

Recently, an Israeli professor’s guest lecture was disrupted at the University of Minnesota Law School, and the Palestine Solidarity Committee at UT-Austin (led by law student Mohammed Nabulsi) disrupted an Israeli Studies event:

These tactics are nothing new. Students for Justice in Palestine branches at numerous universities have engaged in such tactics:

Vassar SJP spread a Nazi cartoon; at UC-Davis SJP taunted Jewish students with chants of “Allahu Akbar;” dorm stormings have taken place at NYU, Northeastern and elsewhere; at Cornell University pro-Israel students peacefully holding signs were taunted and called “Zionist scum” and a lecture was disrupted as protesters took over the stage; at U. Galway in Ireland, a speech by a visiting left-wing pro-Israel Professor was disrupted with demands that he “get the f–k off our campus now.”

In all of these cases, the violence was directly tied to support for the Boycott, Divestment and Sanctions movement. There are many, many other examples.

Now there is another example, as protesters at Kings College in London violently tried to break into a visiting lecture by an Israeli speaker.  Richard Millet was in attendance, and reports Police prevent activists smashing into Ami Ayalon talk at King’s:

I was patiently queuing for Ami Ayalon’s joint KCL and LSE Israel Societys’ talk outside the Norfolk Building of King’s College, London tonight. I had arrived early and was near the front of the queue but soon the doors were closed as the room held only 50.

50 to 60 people were left shut outside on the street, among them 15 fuming anti-Israel activists who had planned to get in and disrupt the talk.

These activists from SOAS, KLC and LSE Palestine Societies had already handed out leaflets attacking Ami Ayalon and Israel. But with their being shut outside chaos ensued with the police being called.

Ayalon was head of Israel’s Shin Bet between 1996 and 2000 and then served as a Labour MK. He also launched a peace initiative called The People’s Voice. He’s now in the UK being whisked around by Yachad to give various talks, the gist of which seem to be Israel needs to mend its ways….

As soon as the doors shut the frustrated anti-Israel activists pounded the doors and the windows looking into the talk. They screamed “Free Free Palestine”, “Viva Viva Palestina” and “From the River to the Sea Palestine will be free” and smashed a window.

They then climbed the windows to unfurl a banner. A fire alarm was set off and eventually police vans and police cars pulled up and 20 police constables protected the building.

In this video from inside you can hear the fire alarm going off as the speaker tries to continue:

In this video, you can hear the banging on the windows, along with the common chant “From the River to the Sea, Palestine will be free”:

The Kings College Israel Society posted the following on Facebook:

What if I hadn’t arranged the 3 campus security guards plus 3 Safe Space Offers ( plus 7 other staff- included KCL and KCLSU staff), what if all the protesters had got into the building, what if they had managed to get into the room and started throwing the chairs at the people inside, what if they had started hitting not only windows but speaker and the people attending, what if they had set a fire, what if I had actually got hit so badly that I would actually have been hurt to the point that I would have been injured, what if KCL Action Palestine would have come to event with questions and challenged the speaker in a respectful and peaceful manner…” 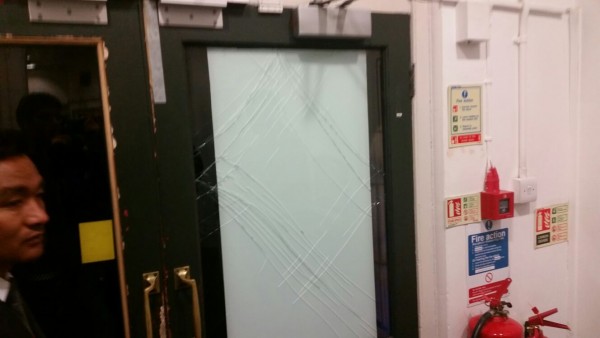 Haaretz reported that such intimidation is pervasive on British campuses:

[David] Tamman, who has been co-president of the LSE [London School of Economics] Israel Society for two years, said the situation had reached the point where any Israeli speaker – from the right or the left – could expect this treatment from protesters like those who disrupted Ayalon’s speech.

“I think this really showed the true colors of the people who cause such a fuss and demonize Israel. It’s not Israel’s policy, it is with Israel itself. They see Israel as a colonial illegitimate power that needs to be dismantled completely. Even Ami Ayalon is considered by these supposed human right activists to be a target … anyone who has any sort of Zionist position is considered something completely illegitimate.”

This conduct doesn’t take place in a vacuum. As this late December tweet by the LSE Israel Society reflects, these intimidation tactics have been ignored by universities: 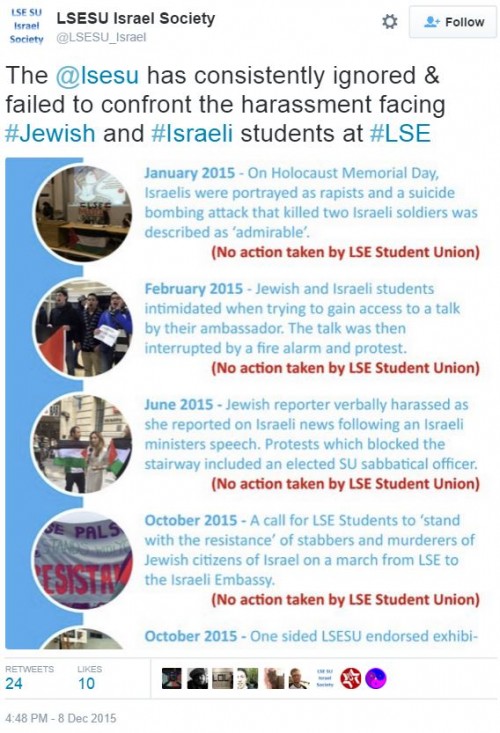 The attack was roundly condemned, but such condemnations have had no effect in the past. The Jewish News (Britain) reports:

We’ve seen reports on social media of students feeling frightened and intimidated- we take this very seriously.. We’re looking into how we move forward from this to make sure all our students are safe, and able to discuss, debate and learn in environments that are supportive and inclusive of all.”

Whenever you hear BDS supporters claim it is a non-violent movement, don’t believe it. When they chant, as they frequently do, “Long Live the Intifada,” remember what the Intifadas have been — suicide bombings and knifings.

The government in the U.K. can’t be bothered with dismantling these violent, jew hating mobs imported from islamic countries.

The British PMs are too busy debating whether or not to ban Donald Trump from their shores.

The indiginous Brits, Scots, Irish, and Europeans way outnumber the “imports” in the mob.

How long before the peace loving compassionate anti Israel snowflakes stop busting Windows and start carrying knives which will accidently get stuck in people ? Then I am sure the snowflakes will say the knives were being stolen so they just had to keep pulling the knife back out as it was mysteriously going back into the bodies.

It is time to be armed with what ever is possible. I have a cane I used to use post car accident. I don’t need a cane any more but I still have a slight limp that I work to mask (making sure to keep feet closer together when walking), however when I am out in crowd or area I don’t know I use my steel cane to walk. I am tall so it is fairly long and I have been taking basic BO training. Not that I am really good with it yet but if someone attacks me with a knife or comes after me with hands I am at least better off than being defenseless and attacked.

I wonder how many of the thug’s shirts were actually brown?

Plus handicapped person fends off attacker with cane to save life I think would work as self defense. It sounds better than BO expert with steel staff bashes idiot.

One man with a sniper rifle strategically located firing a few rounds deliberately missing everyone but setting them all in a panic would discourage this behavior. If that fails to stop the demonstrations a leader could be identified and dropped.

What does anyone expect? It’s Britain; they don’t exactly have a history of accepting Jews.