Anti-Israel Boycott Resolution goes down in flames at McGill University

Anti-Israel Boycott Resolution goes down in flames at McGill University 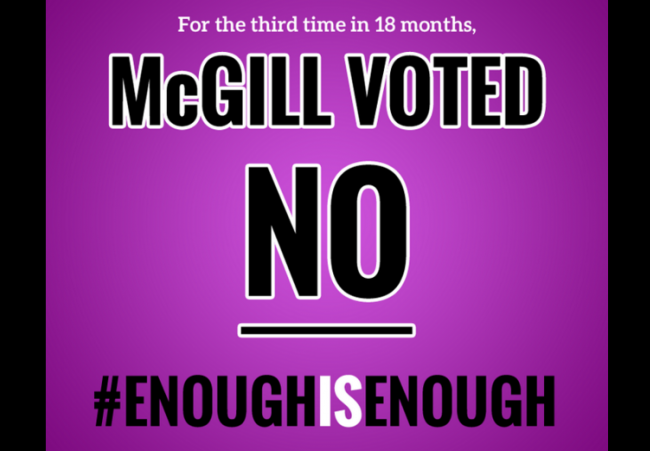 McGill University in Montreal was the latest effort by anti-Israel students to pass a Boycott, Divestment and Sanctions motion.

Initially, at a student assembly packed by BDS supporters, the motion passed:

The Student Society of McGill University has voted to boycott Israel.
The idea came up for a vote twice before in the last 18 months at McGill University, and was put forward again Monday night by the Boycott, Divestment and Sanctions (BDS) movement.

This time, it succeeded.

“What we basically did is write a motion and brought it to the general assembly at our student union today. The motion is on boycott, divestment and sanctions against Israel,” said Laura Khoury of the McGill BDS Action Network.

Students voted 512 to 357 in favour of adopting the motion. While it may have been a small portion of the student population of 30,000, they say vote sends a message. 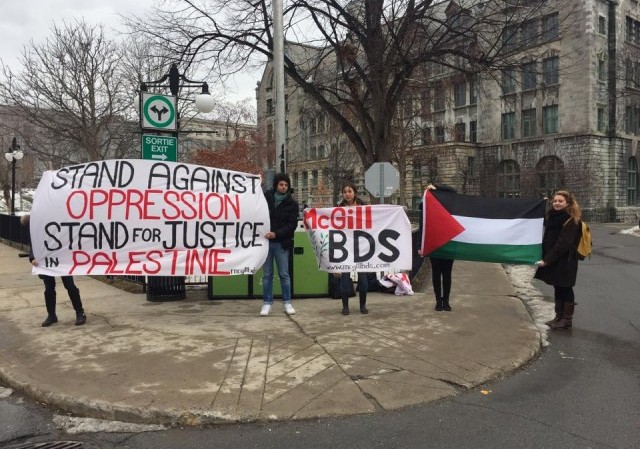 The vote was celebrated at anti-Israel websites, like Mondoweiss, which used it to offset the impact of a Canadian parliament vote overwhelmingly condemning BDS. 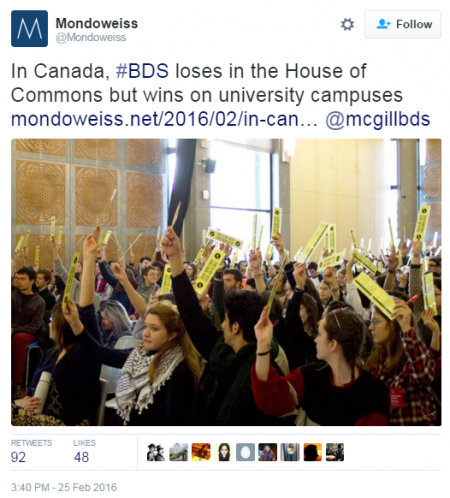 Vassar Students for Justice in Palestine, which has a BDS motion before the student council on March 6, also celebrated:

The referendum then failed when it went to a student body vote:

A motion put forth by McGill University students who support the Boycott, Divestment and Sanctions movement has failed.

Students had initially voted earlier this week in favour of the motion to boycott Israel, which was put forth by a group called the McGill BDS Action Network.

The initial vote, which took place during a general assembly at the university, drew about 900 people.

Students have now voted down three separate BDS-related votes at McGill in the last 18 months.

Over the last week, Jewish students at the school have reported being the targets of anti-Semitic slurs and feeling generally unsafe on campus. McGill’s donors have also threatened to pull their financial support to the school over the results of the initial vote.

McGill University issued a blistering anti-BDS statement after the voting was concluded: 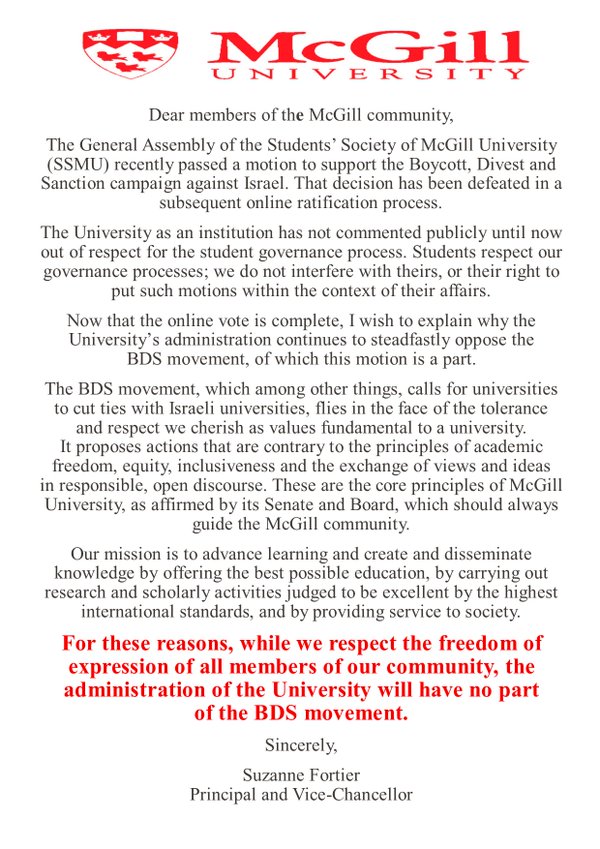 There are lessons here that we see in many places.

First, student assemblies and councils are subject to manipulation and intimidation. The results are skewed by peer pressure and motivation — the anti-Israel students are more motivated. For many of them, being anti-Israel has become their religion and identity.

Second, few students vote. Turnout was only about 15% of the total student body. So getting out the vote is critical. Students opposed to BDS did a good job recently at U. Ottawa, and again at McGill.

Third, BDS declares victory even when it loses because it gets people talking about how bad Israel is. So it tries again and again. This was the third try at McGill. Will there be a fourth?

Fourth, and most important, BDS is a dead end for deadenders. Even had the motion passed, it would have had no impact on how McGill operated as a university. It is no wonder that BDS activists are becoming frustrated with the divestment approach and increasingly are turning to threats, intimidation and trying to shut down opponents’ speech. More on that in the next post.

That is a much stronger statement from the administration than I would have expected. Good for them.

Jew h8ters gotta Jew hate, but fortunately, the adults are still in charge in some place; just not enough.