Max Blumenthal’s popularity on campuses serves as a depressing lesson in how societies go wrong. 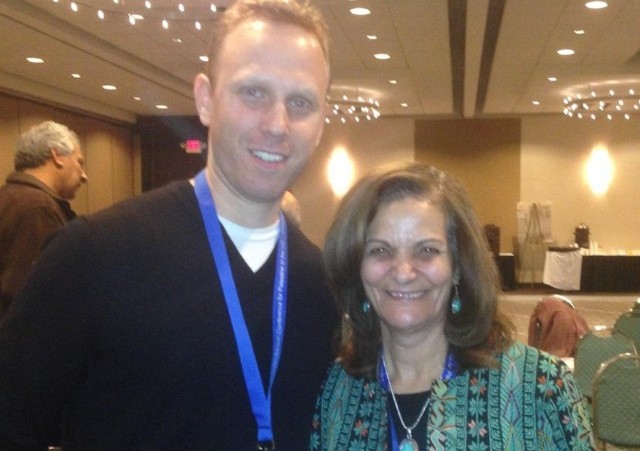 On a few occasions we’ve touched upon the toxic anti-Israel rhetoric from Max Blumenthal, son of Clinton confidant Sidney Blumenthal:

In his earlier days, Blumenthal turned his wrath on James O’Keefe, Andrew Breitbart and others he deemed part of the vast right-wing conspiracy:

Then he turned on Israel with a viciousness of propaganda rarely seen.

His claim to fame is his book Goliath, which has been characterized as The “I Hate Israel” Handbook (emphasis added):

It is no exaggeration to say that this book could have been published by the Hamas Book-of-the-Month Club (if it existed) without a single word change once it’s translated into Arabic. (Though to be fair, Blumenthal should probably add some anti-female, anti-gay arguments for that.) Goliath is a propaganda tract, not an argument as it does not even consider alternative explanations for the anti-Israel conclusions it reaches on every page. Its implicit equation of Israel with Nazis is also particularly distasteful to any fair-minded individual. And its larding of virtually every sentence with pointless adjectives designed to demonstrate the author’s distaste for his subject is as amateurish as it is ineffective.

Blumenthal is a frequent speaker on campuses, and the darling of groups such as Students for Justice in Palestine. Blumenthal was the featured pro-divestment speaker at the U. Michigan divestment vote a year ago, and recently in Paris: 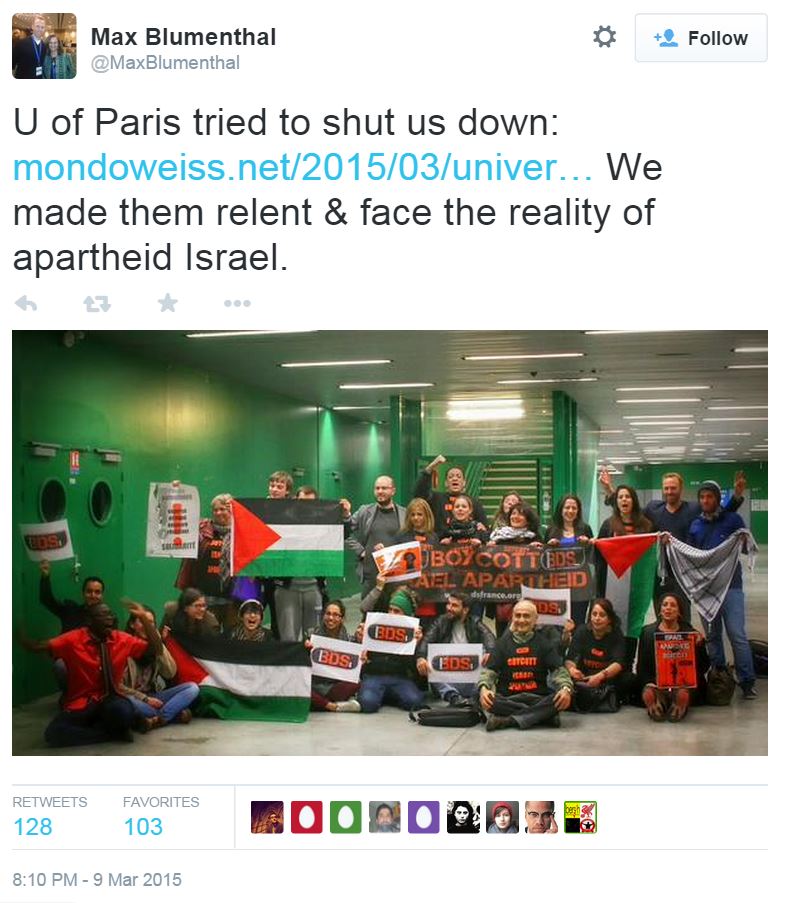 Tablet magazine has a lengthy article about Blumenthal’s antics, which are part and parcel of the gross caricature of Israel that feeds the outbursts of anti-Semitism throughout Europe. It’s worth a read, Wild Thing: Max Blumenthal’s Creepy Anti-Zionist Odyssey:

Max Blumenthal’s stock in trade is anti-Zionist polemic dripping with cartoon-like, racially weighted depictions of Israeli Jews. What distinguishes him from many other anti-Zionist writers is not his political views, but the obsessive nature of his work, which seems animated not by moral passion or analysis but by hate….

And it’s not just anti-Semitic crackpots who flock to him anymore. Mainstream journalists like James Fallows and Andrew Sullivan have also praised Blumenthal’s work. Astonishingly, Blumenthal has promoted Goliath at the New America Foundation, a centrist Democratic Party think-tank, and was recently given a platform by the New York Times.

But the truth is that Blumenthal is a pisher di tutti pishers and the mainstreaming of him has no political importance, since none of his political views are original to him. As a reporter, the best one can say about him is that he doesn’t speak Hebrew or Arabic, and he doesn’t have any sources—so it’s hard to fault him for getting things wrong. Rather, his specialty is the age-old marketing of Israel as a unique repository of the world’s evils and therefore a deserving target of unrestrained invective.

Researcher Nurit Baytch spends considerable time on Twitter correcting and calling out Blumenthal’s antics. Here are just two examples, but scroll through her feed for more:

.@MaxBlumenthal Gallup polls have found + or no correlation btwn level of education & support for Israel: @Awralah pic.twitter.com/gT5OpPDfp9

How did we get to the point that such anti-Israel propaganda finds such a receptive audience on our campuses?

Perhaps it’s unfair to focus on Blumenthal. He’s just one of many criss-crossing the globe and our campuses spreading a distorted, demonic view of Israel. He’s a symptom of a much bigger problem.

The question isn’t “How did we get to the point that such anti-Israel propaganda finds such a receptive audience on our campuses?”

But how do we proactively nip this 21st century Brownshirt in the bud before it becomes full blown.

The only questions that are relevant is that when Max finally stops pretending, puts on a Hamas or Nazi uniform and openly starts screaming for the extermination of all Jews everywhere will college campuses still pay him to speak and if so, will there be any reaction at all? Or, alternatively will he abandon these venues and just go to work for Glenn Greenwald.

When the next pressure-cooker bombs explodes in a major U.S. city, maybe Blumenthal will be kind enough to be between the innocent crowd and the bomb.