And some lessons for the campus BDS movements, which worship Blumenthal

Max Blumenthal is experiencing what goes around coming around.

Having blamed various critics of radical Islam as well as international Zionism for the 2011 mass murder in Norway, unfairly, Blumenthal now is in focus because the Overland Park shooter was a big fan of Blumenthal’s Jewish money and Israel Lobby conspiracy theories.  The shooter was a Neo-Nazi and KKK leader for whom Jewish control of the media and international money was a core belief motivating hatred of Jews.  That’s a shared space for anti-Zionists of multiple political ideologies and religions.

Specifically, the shooter focused on Blumenthal’s theory that Jewish campaign donors were trying to buy the 2012 U.S. presidential election for Bibi Netanyahu, as expressed by Blumenthal in a lengthy article and a Russia Today television interview, to which the shooter linked.  It’s ugly stuff, but the type of ugly stuff for which Blumenthal has become known.

I’ve been less harsh on Blumenthal than others, The Overland Park murders, anti-Zionist conspiracy theories, and the blame game:

Assuming Cross [aka Glenn Miller] linked to Blumenthal’s conspiracy theories about the 2012 election, would that mean Blumenthal is responsible for the Overland Park shooting? Absolutely not.

Is the intersection between neo-Nazi and anti-Zionist conspiracy theories worthy of examination? Absolutely.

We have seen in Europe in particular how anti-Semitism and anti-Zionism go hand-in-hand, often based on conspiracy theories about Jewish and Israeli influence. [image omitted]

Those types of consipiracy theories regarding the alleged manipulations of Jewish money and interests are as old as hate itself.

That is a fair subject of discussion. I wonder if the mainstream media will go there, as it did in the Norway shooting.

Others are more direct in drawing the connection between the shooter’s adoration of Blumenthal’s anti-Zionist conspiracy theories and the shooting, in part perhaps because Blumenthal tried to lay blame on some of  them for the Norway shooting (Pipes, Geller):

When Rush Limbaugh read parts of Radosh’s post on air yesterday, one of Blumenthal’s anti-Zionist compatriots and staunchest defenders, Rania Khalek, wondered on Twitter why MSNBC and others in the liberal media were not defending Blumenthal the way they had defended Sandra Fluke when she was attacked by Limbaugh: 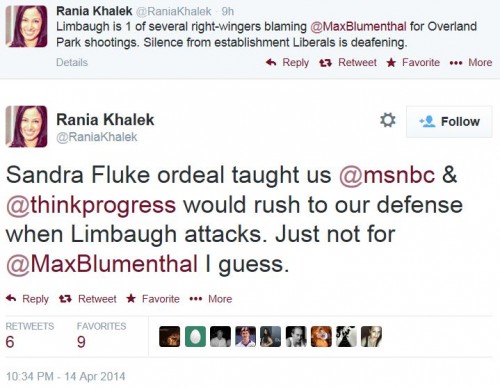 I think the answer to that question is that even harsh left-wing critics of Israel, like Eric Alterman, cannot stomach Blumenthal’s extreme demonization of everything regarding Israel, and conspiracy theories that play on Jewish and Israel Lobby control.  Alterman termed Blumenthal’s most recent book “The I Hate Israel Handbook” and  suggested it “could have been published by the Hamas Book-of-the-Month Club (if it existed) without a single word change once it’s translated into Arabic….”

MJ Rosenberg, formerly of Media Matters, is as harsh a maintream critic of Israeli policies as they come.  Yet even Rosenberg has abandomed Blumenthal and rejects Blumenthal’s extremism.  When Blumenthal’s reaction to revelations that his writing at least in part inspired the Overland Park shooter was to double down and blame Israel, Rosenberg suggested Blumenthal stop digging: 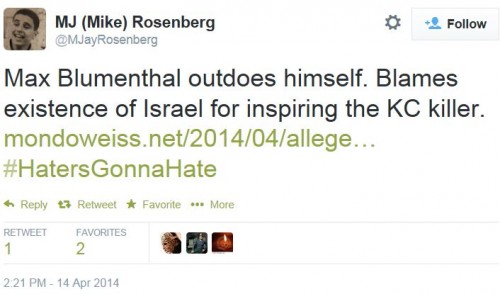 So, the answer to Rania Khalek’s point is that Blumenthal has become toxic to those who want peace, who don’t want the destruction of Israel, who don’t peddle in anti-Zionist conspiracy theories.

Blumethal does still have a fan base.  It’s in the campus BDS movement, where he is a hero and much welcomed and frequent speaker.

Blumenthal was chosen the by U. Michigan divestment supporters to be their representative at the open Student Council meeting, where he spoke for almost one-half hour.  (Featured image)  While Blumentha’s Michigan speech was hailed by divestment supporters, I think it hurt their cause because it was so unyielding, in contrast to the pro-Israel speakers who took a more measured tone.  The resolution was defeated.

There are multiple lessons here. 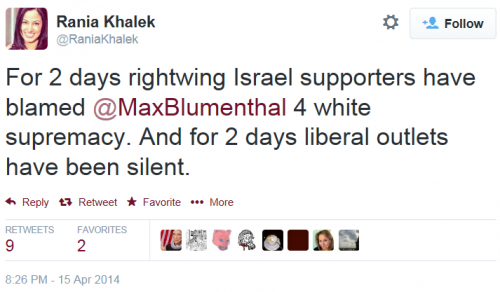 Acorns and trees come to mind.

Andrew Breitbart had this bastard pegged from the get-go – and confronted him very forcefully at a CPAC years ago.

Do you have the video? Or the link to it?

Is there a Yiddish phrase that is akin to “chickens coming home to roost”?

Something about chickens coming home….

Blame him for the killings — all day and all night and don’t stop. They wanted to play this game, let’s play.

They blamed Sarah Palin for the shooting of Gabbie Giffords and others. Nearly the entire media did. Palin had no connection to the shooter whatsoever, materially or in his mind or hers. Her website had a cross hairs icon of democrat targets as a campaigning tactic — a commonplace stylism used by democrats and republicans for generations.

The radical Left is anti-Semitic. Blumenthal is a particulary vicious and deceptive character assassin. He is, in Andrew Breitbart’s term, a “despicable human being.” Blame him. Make him pay.

Blumenthal is mentally ill..nothing to defend

Thank you for your interest in working with us. We always welcome input from our anti-Semitic Jewish readers.

We read with interest your proposal to pen a weekly “Useful Jewdiot” column, but, unfortunately, your paranoid rants do not meet our standards.

We will keep your resume on file.

No one is defending Blumenthal because, in the end, he too is a Jew, LOL.

1) I wish you would link to the tweets and not just present them as images. For instance, I want to see the mondoweiss posts that Rosenberg links to.

2) I think you are mischaracterizing Pipes’ piece which I don’t see as nearly as harsh on Blumenthal as most of the pieces (including perhaps your piece) but mostly harsh on the fallacy of guilt by association and Blumenthal’s use of it.

Jay, the problem is that WordPress no longer displays the tweet images like it once did. That’s why it has to be screenshots.

In the meantime though, Glenn Greenwald will rush to the legal defense team of the shooter on ‘free speech grounds’ no doubt. He’s done it before.

To all you Clintonistas. Is this not Clinton pal Sid Blumenthal’s son?