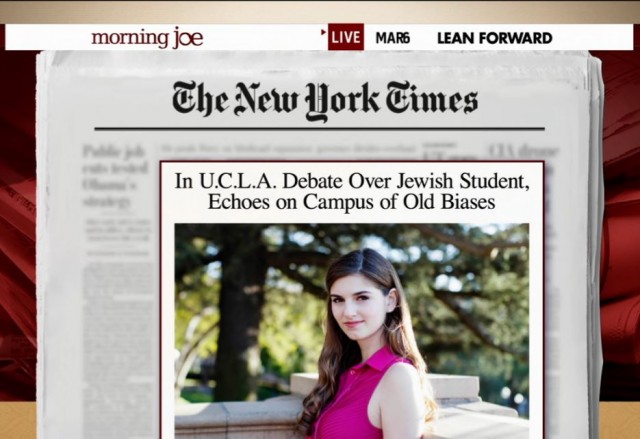 Long time Legal Insurrection readers know that for years we have been sounding the alarm over the connection between the gross anti-Israel propaganda which demonizes and dehumanizes both Israeli Jews and supporters of Israel, and anti-Semitism. Scroll through our Boycott, Divestment and Sanctions (BDS) tag for over 200 stories over the years.

We reported on February 12, 2015, that UCLA student gov’t candidate challenged for being Jewish.

Now the story has gone mainstream, with an article in The NY Times, In U.C.L.A. Debate Over Jewish Student, Echoes on Campus of Old Biases:

It seemed like routine business for the student council at the University of California, Los Angeles: confirming the nomination of Rachel Beyda, a second-year economics major who wants to be a lawyer someday, to the council’s Judicial Board.

Until it came time for questions.

“Given that you are a Jewish student and very active in the Jewish community,” Fabienne Roth, a member of the Undergraduate Students Association Council, began, looking at Ms. Beyda at the other end of the room, “how do you see yourself being able to maintain an unbiased view?”

For the next 40 minutes, after Ms. Beyda was dispatched from the room, the council tangled in a debate about whether her faith and affiliation with Jewish organizations, including her sorority and Hillel, a popular student group, meant she would be biased in dealing with sensitive governance questions that come before the board, which is the campus equivalent of the Supreme Court.

As I have pointed out, this is part of a larger movement to ban pro-Israel and almost always Jewish students from involvement in campus politics.

Morning Joe addressed the situation (note – the video they mention was taken down, but Legal Insurrection has posted a complete version of that portion of the event):

As researcher Nurit Baytch points out on Twitter, the students raising the Jewish issue were BDS supporters:

.@LegInsurrection So NYT got around to reporting it almost a month after you did? ha!

.@LegInsurrection The students who expressed concern about the Jewish student's Jewishness are BDSers:
#AntiSemitism pic.twitter.com/pcdOk5TTPP

Hopefully this will be a wake up call about the virus spreading on our campuses.

Update: Via Twitchy, it seems that there is an awakening, though not sure they understand how pervasive this is and how it is a deliberate BDS tactic:

Chilling –> UCLA student council debates whether Jewish student is too biased (by Jewishness) to serve on board http://t.co/xaggjrjnka

Charges of anti-Semitism are overused, usually against Israel's critics. But this sure seems raw anti-Semitism http://t.co/MCSbqTggDi

Liberal colleges have tolerated anti-Semitism for decades. This is the shocking result: http://t.co/1FhiefHv8k

Anti-Semitism in Europe? It's here at UCLA. Why isn't UCLA leadership taking a stronger stand against this bigotry? http://t.co/ceB9OPz7CR

Hey, this is good!

As always Professor you are way ahead of the curve! Now lets see if the MSM actually do anything about it and keep the pressure on. I doubt it.

Sooooo, now we can discriminate on the basis of religion? Jews need not apply?

Shall we add “…except if you are Jewish”?

The stench of racism/religionism permeates this and other campuses, and it isn’t good smell…

It’s the silent “but” at work.

When I was a kid there was a movie called “Gentleman’s Agreement”.

Looks like the hands of the clock have cycled back.

“Sooooo, now we can discriminate on the basis of religion?”

No. It is only acceptable to discriminate against Jews and Christians. Muslims are still off limits.

THAT is still discrimination.

Politically correct discrimination! How low will the liberals drag us down?

The Legal Insurrection video is not working.

Here is another video with clips of what was said:
https://www.youtube.com/watch?v=rpULMwxQnz4

our video link works for me. here’s the link again, http://youtu.be/2l3NBbiQ11Q

A religious (dis)qualification for office. A concept rejected by the old, privileged, white slave owners who wrote the Constitution. This puts those students supporting this “religious test” a cut below a group they revile.

It depends on the charter of the judicial board. Does being Jewish uniquely violate its principles or undermine its purpose? Does anyone else have a similar conflict of interest? Does the problem reside with individual members or the charter?