Walking While Jewish in Britain

Walking While Jewish in Britain 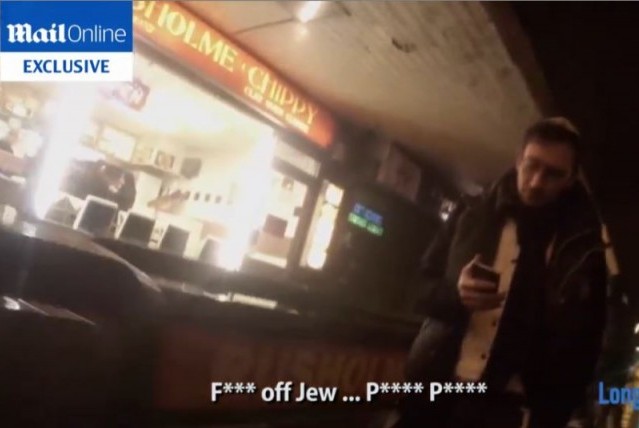 We have posted several times about what it is like to be Walking While Jewish in various places in Europe, including Paris, Copenhagen, and Malmö, Sweden.

The fact is that in many places in Europe, it is dangerous to be seen Walking While Jewish.

Including in Britain, as The Daily Mail demonstrated (h/t Isreally Cool):

With as many as 45 per cent of British Jews fearing they ‘may not have a future in Britain’, according to a survey by the Campaign Against Antisemitism – and following an experiment by Israeli Zvika Klein on the streets of Paris, British journalist Jonathan Kalmus decided to test the levels of prejudice in two British cities with shocking results. Volunteers in Copenhagen and Rome also suffered some abuse, as well as welcoming reactions, while Jewish journalists in Stockholm and Berlin walked for hours without incident.

‘You Jew’ was the anti-Semitic scream which came from a passing car. My shaken wife tried to explain it away to my seven-year-old daughter as a very large sneeze. They were simply playing in a local park in Manchester a few weeks ago when the incident ripped through what should have been a peaceful and wholesome time for any mother and child.

‘Fight the Jewish scum’ and ‘Jew, Jew, Jew… Run’, were the more vicious threats hurled at me in the past few days, however, when I decided to secretly film and find out whether ‘Jew-hatred’ really is alive and kicking on British streets.

The answer to that question is a resounding and heart-sinking yes.

There are still people from WWII alive, today, amongst us. It’s not like Jew-hatred and what comes from it are ancient, forgotten history. People who saw where this sort of thing can lead are still with us today.

How can this be happening again?

Well, the President of The United States is seen publicly groveling to do a deal with the leaders of Iran, leaders who are on record repeatedly vowing to destroy Israel and kill all the Jews. I suppose that might tend to embolden the vile scum who say these sorts of things. Elections have consequences.

Yes, it is President Obama’s fault. Anything that isn’t?

At least Jews are welcome in Israel. Where do you go if live in this country and you are ‘Walking while Black’?

Why are you so concerned with Europe and not the good ole US of A?

Take your race-baiting horseshit and stuff it back up your ass where it belongs, liar.

“Where do you go if live in this country and you are ‘Walking while Black’?”

The Office Of President Of the United States?

The Office of Attorney General Of the United States?

I could go on, ya moron. You STILL would not get it, huh?

Where do you go if live in this country and you are ‘Walking while Black’?

The biggest threat to the lives of those “walking while black” in this country are those who are “thugging while black”. It’s blacks robbing, raping and killing other blacks that’s the real problem here. Still, blacks are statistically safer here than they are in any number of black African or Arab countries. What is your answer…? How do we stop blacks from victimizing other blacks in our communities? The “war on poverty” hasn’t helped; majority-black city governments haven’t helped; the Jesse Jacksons and Al Sharptons of the world haven’t helped. Giving them a “black homeland” to “return to” hasn’t helped – that was the experiment that is Liberia.

What *is* the answer, O Smart One?

History doesn’t always repeat itself but, sometimes, it damn sure rhymes.

I think it needs to be said that this miserable attitude is imported.

Let’s see the faces of the people saying these things. The film-makers could use facial recognition software to identify them and publicly shame them.

Did I miss something? There were a few offensive spots in that video, but for most of the scenes I did not see or hear anything offensive. Perhaps it is the low quality of the video. Also, I could see that some of the closed captioning was cut off in the video, so I could not really get a sense of what was being said (other than the one woman (obviously not a “lady”) who apparently said “F*** you Jew”).

And note that I am not saying that nothing offensive was there – if what was listed in the written explanation was there, then that would be offensive – I am just saying that I did not see or hear much of that.

I did hear “Shalom” several times, but I thought that was a friendly greeting. Is “Shalom” offensive?