On the Golan Heights – The Battle of Tel Saki

On the Golan Heights – The Battle of Tel Saki

We spent the day on the Golan Heights and the Lebanese border near Metula.  We were accompanied by my good friend from Moscow days who I mentioned in a prior post. We were led by Hadar Sela of BBC Watch blog, who lives on the Golan and has an amazing knowledge of the topography, history, people, and politics.

I had intended to do one blog post — but soon realized there was just too much to cover so I’ll break it down into three posts to run on separate days — The Battle of Tel Saki, The Valley of Tears, and The Lebanese Border.  The blog posts will track our journey from the southern to northern Golan, then down to Metula in northern most Israel.

We started the day where we stayed overnight last night, Kibbutz Sha’ar HaGolan to the south of the Kinneret (Sea of Galilee), in the shadow of the Golan Heights: 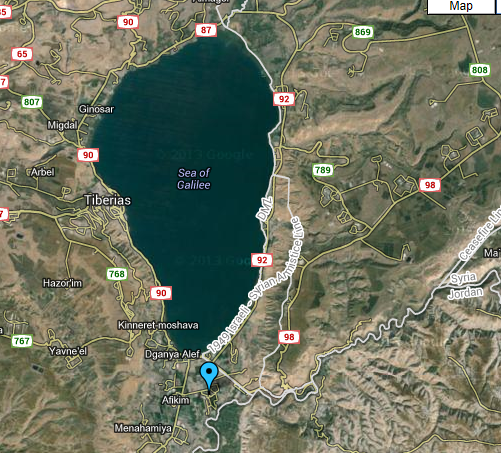 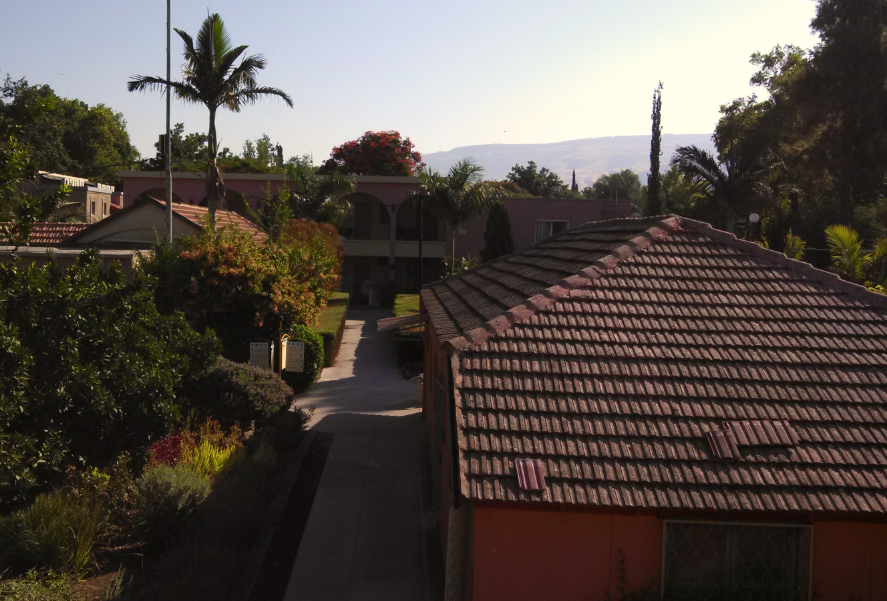 We then drove on the snake-like Highway 98 up the side of the Golan Heights facing Jordan across a deep ravine.  The border fence along the road is shown in this photo — my reaction was the same as yours probably is — that’s the border fence!  We were assured that the Jordanian policing of its side of the border together with the topography was sufficient. 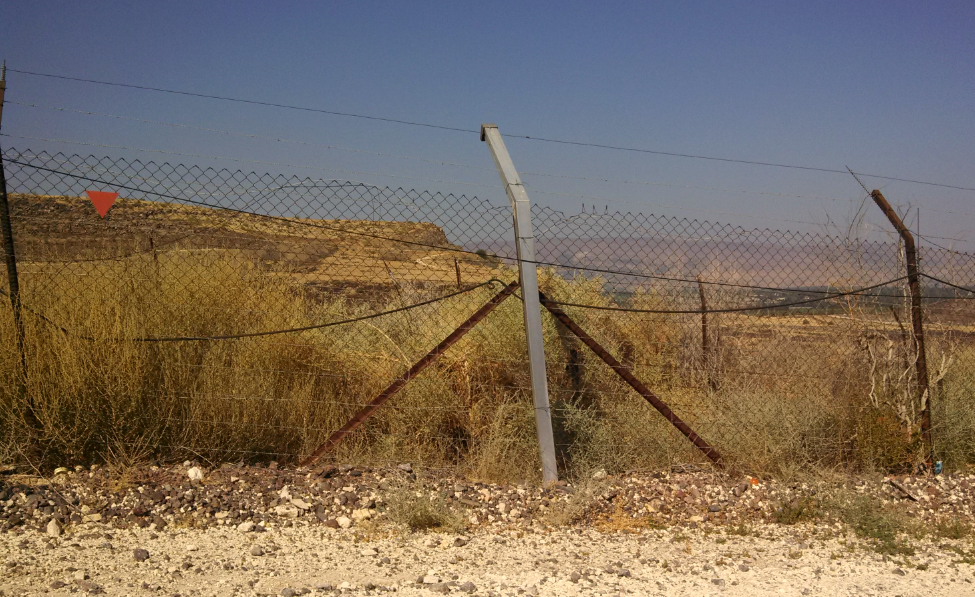 Note also the red triangle signifying a minefield — something we would see repeatedly throughout the Golan even away from the border.  Vigorous warning signs not to leave the established roads and pathways were everywhere.

We then reached Kibbutz Kfar Haruv: 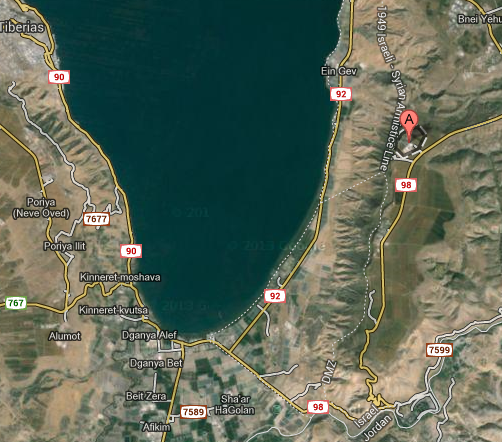 This picture was taken from an old Syrian bunker looking out toward Israel over the Sea of Galilee. 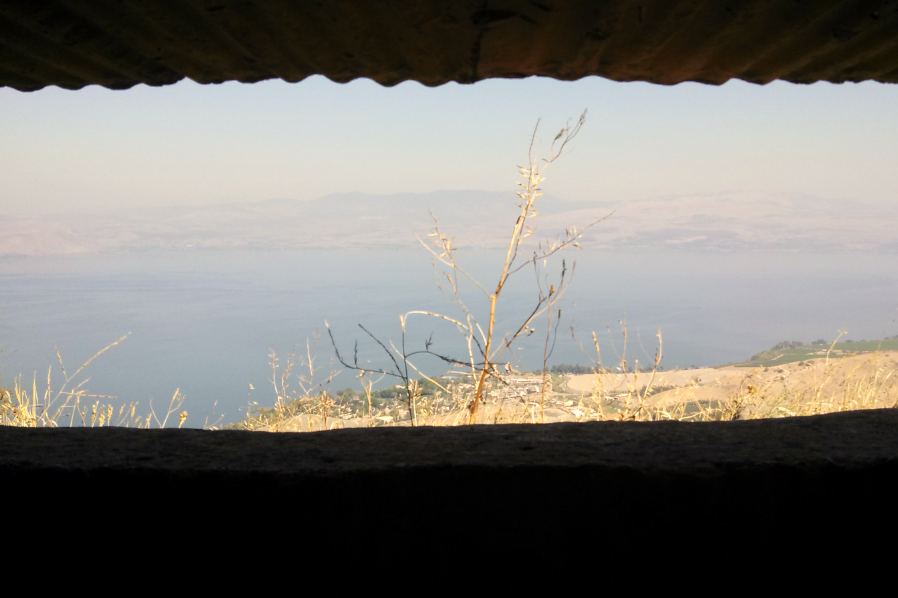 We then headed north toward the Battle of Tel Saki monument. 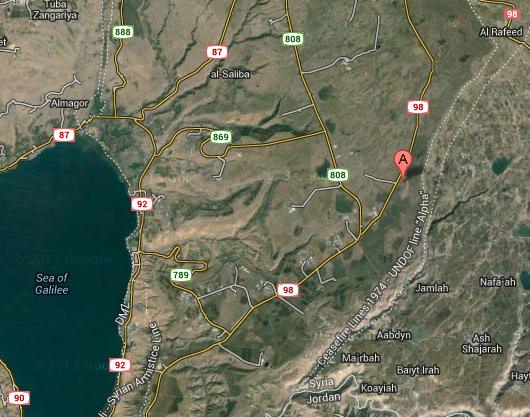 This video tells the story of the battle, which many credit for saving Israel’s existence, as without the heroic efforts of a relative handful of soldiers across the Golan, Syrian infantry and tanks would have poured down onto a largely undefended Galilee region of northern Israel at the outset of the 1973 Yom Kippur War.

Our “guide” and I posed for a photo, with the current Syrian border fence on the near ridge behind us and Syria in the background : 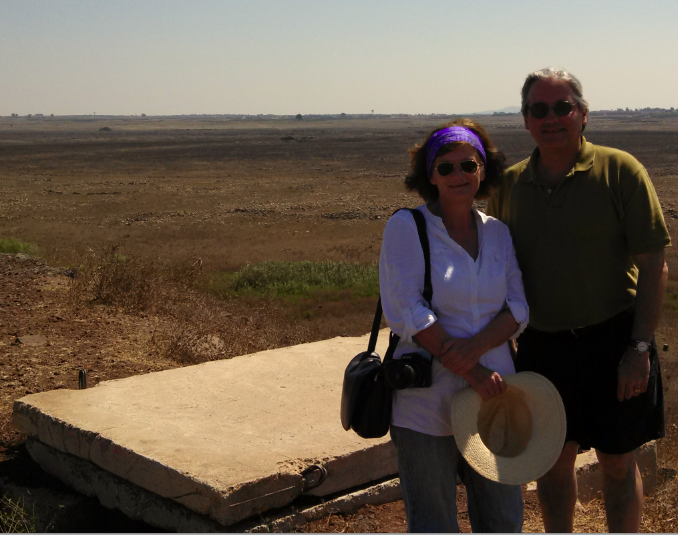 Here are some photos I took at the monument, which was built and is maintained by the Friendship and Heritage foundation: 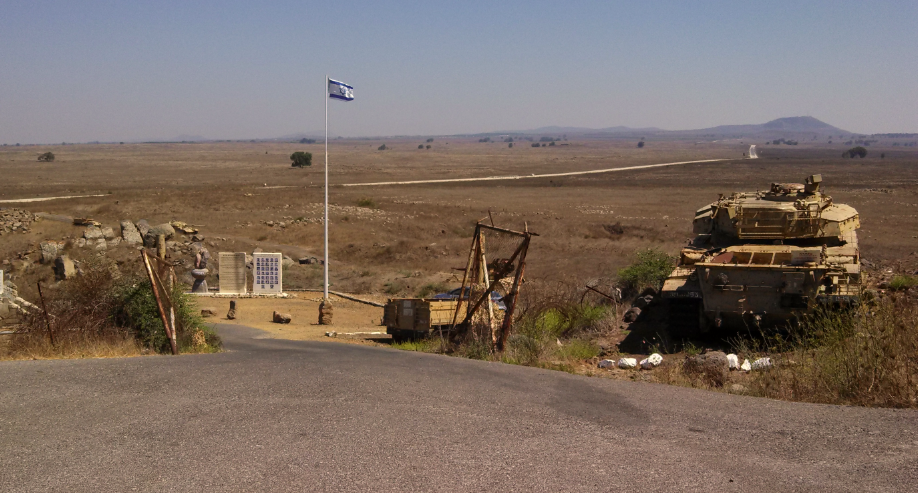 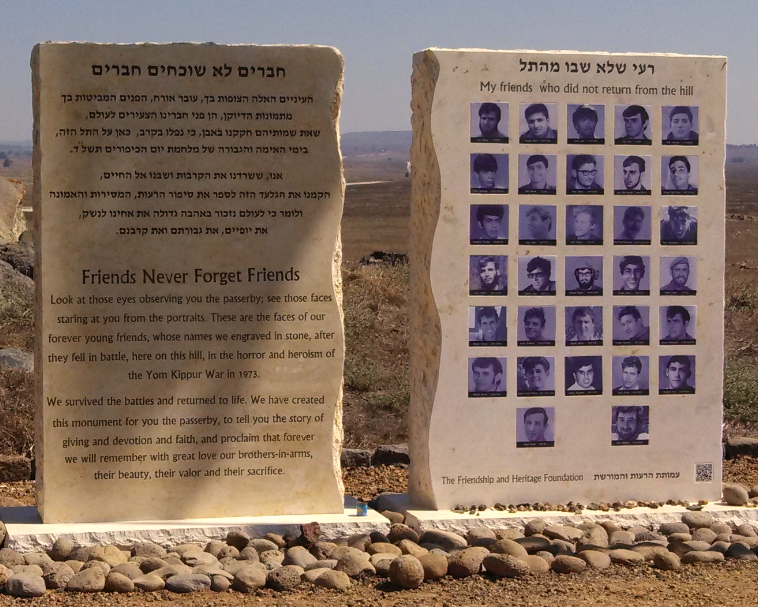 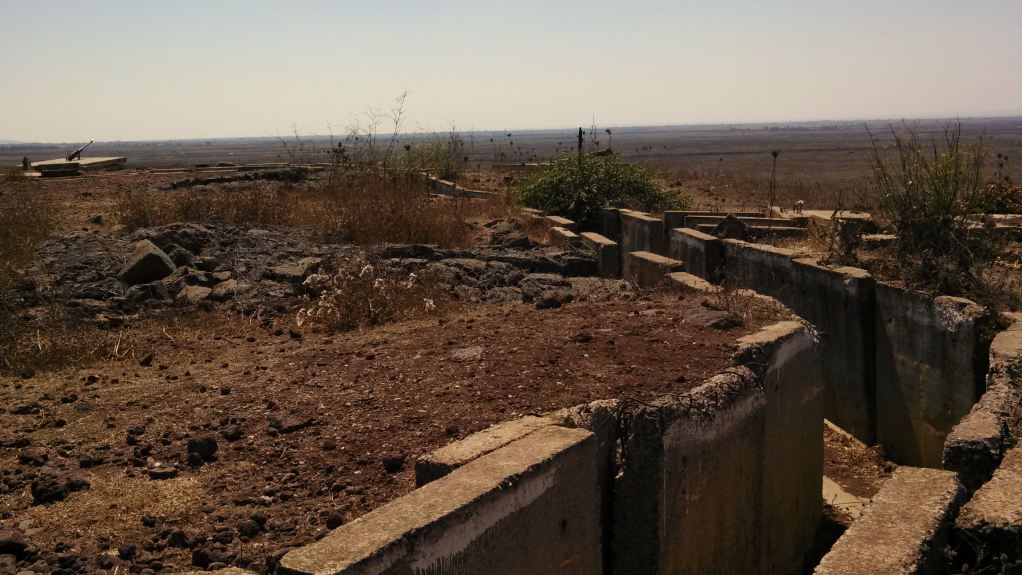 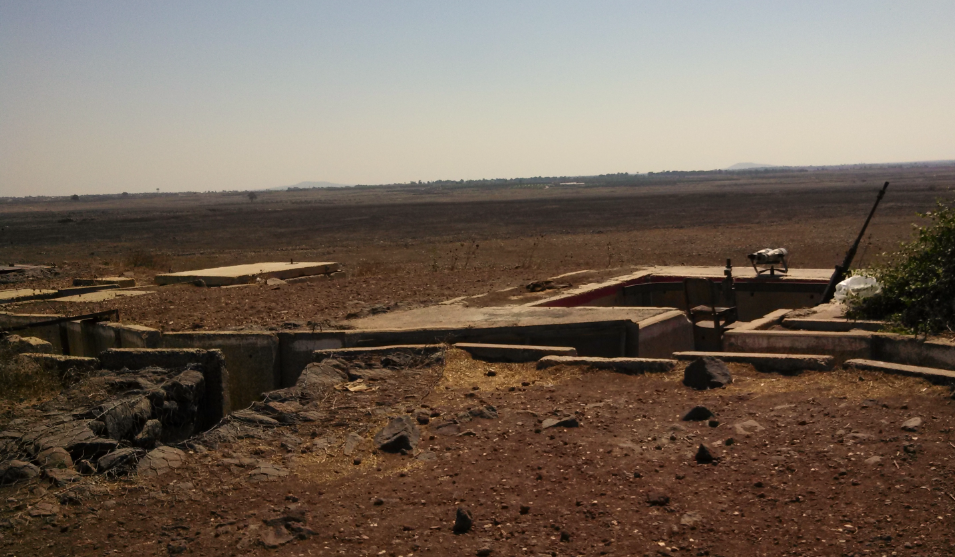 We then headed north again, towards the Quneitra Crossing, witnessing smoke rising from the Syrian side of the border where there has been fighting between Assad’s government forces and rebels, and then to the Valley of Tears.  And after that, the Lebanese border, and a view of the “fake” Hezbollah border town.  All for the next posts.

“Uncle Samuel” has stood in that very bunker.

Our guide was a former Israeli soldier named Ze’ev who had fought during that war.

As we traveled through Israel, he told our group many stories about the wind exposing land mines and other miracles that allowed Israel to defeat her enemies, survive and thrive.

I read about him! He was all alone in a tank. And, for some reason the Syrians thought he represented an entire force. He manuevered his tank among a whole bunch of syrian tanks. And, took each one out. (He had the advantage of knowing his own tank from the rest.)

I think he spent 48 hours waiting for replacement tanks to arrive.

This is why, when the Yom Kippur War was over … One general, named Askenazi (no relationship to Gabi Askenazi), was so distressed . He, alone, went to stand on the street, outside of Golda Meir’s office with a sign that read: 3000 OF YOUR CHILDREN ARE DEAD. RESIGN!

You know Moshe Dayan was also forced to resign.

Golda didn’t resign on that first day. But because a very big turnout began to stand by General Ashkenazi’s side.

In Israel lots of people know these stories. But back in America? The stories have been told in books.

You’ve chosen a very interesting week to be visiting Israel. Hope down the road when you collect your thoughts on the events that are happening, you share with us, here, what you’ve learned first hand.

[A+++ for this stuff] Please keep a window open on what the views are from the “man in the street.” Thanks.

Just a nitpick re: “Israel proper”. According to Israeli law, which is the only binding law on the ground, the Golan Heights are Israel proper, just like Jerusalem. They are not under military occupation, ordinary Israeli law applies, and the Arab and Druze residents are entitled to Israeli citizenship if they choose to take it up. No other countries recognise this change in the Israeli/Syrian border, but nobody asked them and their opinions are legally irrelevant.

You are absolutely right. I have changed the wording.

I am liking the border pics. Most borders are minimal ithe ME often you only know when you have crossed either someone shoots above you or a jeep pops up to take your entry fee.

There are some views like the Sea of Galilee thru Syrian bunker that are everything worth living for.

Landmines are evil. 40 people per week are seriously injured every week in Laos still. However it has stopped the loggers from exploiting the jungle. In the Golan it is keeping that Eco barren look .happening.

Thank you for these posts.

What an incredible journey, and how wonderful to have these friends to guide you, to welcome you.

G-d protected the Israelis during all these events; the miracles are truly that – only from G-d.

The name of the Russian newspaper, printed daily in Tel Aviv, is Vesti. I think you said you’ve lived in Moscow for 4 years, in the early 1980’s. You should be fluent in Russian, no?

Lol carol. Reading Russia & understanding Russian are 2 different things. If the good Professor is like I was – I was very good at reading all the official stuff & a whiz at propaganda but could not deal with Tolstoy because it was arcane Russian or as likely dealt with emotions I don’t recognise. ( Russian stuff) . I only understood the war parts.

Further the conversations people wanted from me were in English & about Chaucer of which I know nothing.. They were very educated .i did pick up English versions of some of the great 19th century workers struggle literature eg Elizabeth Gaskell .

I too met many Soviet Jewish & had some odd memorable encounters. Once I had to explain circumcise a which I did not understand myself for at the time everyone was circumcised . I might have put hundreds off emigrating !( I had actually not seen an uncircumcised so someone volunteered to show me ).- ps I am female.

I did not keep contacts up because of security concerns. I was under watch at home & obviously had a soviet shadow .

As some of my posts may have shown I have kept up with Soviets in Israel & their impact . I know enough to treat Russian newspapers in Israel as I did with Izvestia. Russians can be wickedly naughty.

Russians don’t like circumcision. I think it was in the late 1980’s that a lot of Russians migrated to Brighton Beach. (It’s a stop just before you’d reach Coney Island. And, Nathan’s.) Then, America slammed the door shut on Russian (Jewish) immigration. And, instead, Israel picked up the flow.

Not sure if about 3-million Russians migrated to Israel at that time. But i remember (clearly) that Russian males, as a general rule) are not circumcised.

I’ll point out my son is. His dad’s a cardiologist. And, back in 1979, when he was born, his dad made this decision. Soley based on health reasons.

I’ll also point out that my ex husband’s brother also went to medical school. Where his specialty is OB/GYN. He lives on the East coast. But one Thanksgiving a few years ago, he came here. And, we were all sharing Thanksgiving together, when I brought up the subject of circumcision. In the medical community these days the health benefits aren’t touted, anymore.

And, then this story got shared. Back when Glenn was in medical school, there was still a draft in the USA. So, he applied for the Berry Program. Meaning that he owed 3 years of service to our military. And, being that he was OB/GYN he served this time in Kentucky.

True story. The urologist was seeing thousands of male patients all wanting to be circumcised. (When you’re 19 or 20 this surgery is painful.) And, finally the urologist asked one of his patients why he wanted to become circumcised.

The answer was blow jobs. Seems females didn’t like doing “them” on men who were uncircumcised. And, when men are in the military they can request surgeries at no cost. At the army’s medical center. Which I said was in Kentucky.

It’s a whole other story when you bring this in as a religious symbol. But if I had to bet (sight unseen), I’d venture to guess Russians are like Europeans … they don’t like to see it done. If it’s not a religious ceremony, the obstetricians are the ones trained to do this.)

Was not there four years, just twice as tourist and five months as student. Studied at institute that trained non-Russians to become Russian language teachers. And yes, was (past tense) fluent in Russian at the time, although people said I spoke Russian with a Ukrainian accent (can’t figure out how that happened).

That is really something to see. Thank you for sharing.