A stone’s throw away from trouble in Jerusalem

A stone’s throw away from trouble in Jerusalem

Today I toured areas of the Western Wall in Jerusalem I had not previously seen.

First, the part of the wall to the right of the Kotel (live webcam here) beyond the Mugrabi Bridge, where there are fallen stones from the Roman destruction of the Second Temple: 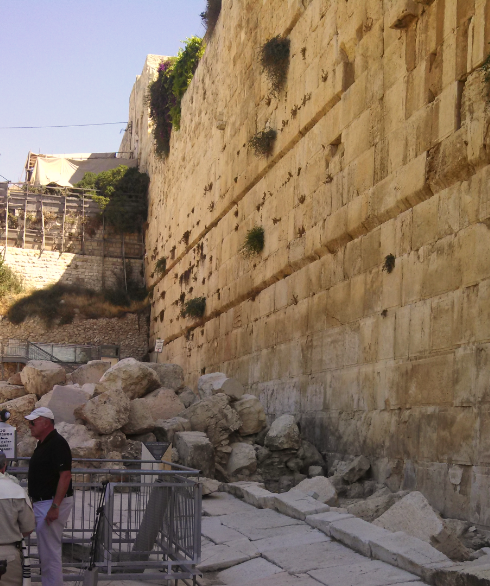 The Wife insisted on placing notes she had prepared and also brought with her at the request of others high into this section of the wall, thereby increasing the chance they would not be removed too quickly. 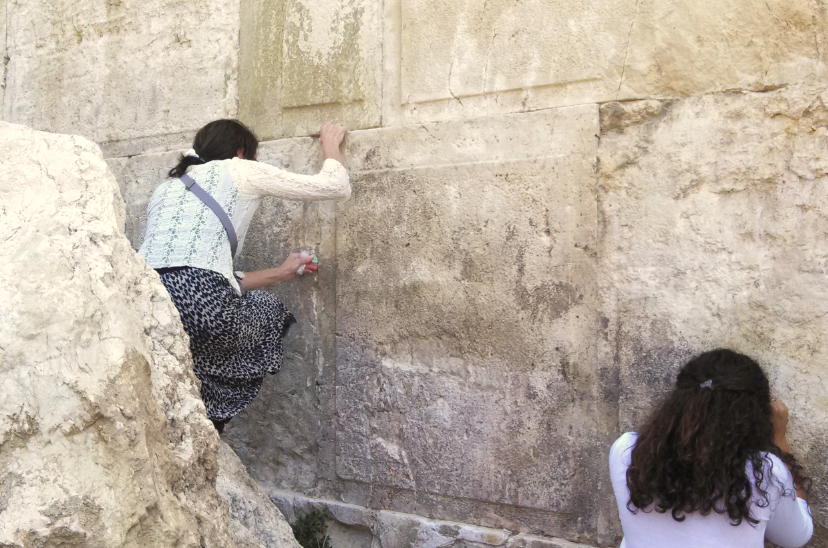 The area is filled with excavations, which give rise to conspiracy theories and threats of violence in the Muslim world that Israel is trying to destroy the Dome of the Rock.

We then toured the Western Wall tunnels.  I learned a history of which I was not aware.  The visible wall is only part of the original wall, and depending on location, it extends as much as three stories below street/ground level.  The reason for this is that the Old City was built on stone arches around the Wall, creating the tunnels.  (More info. here) 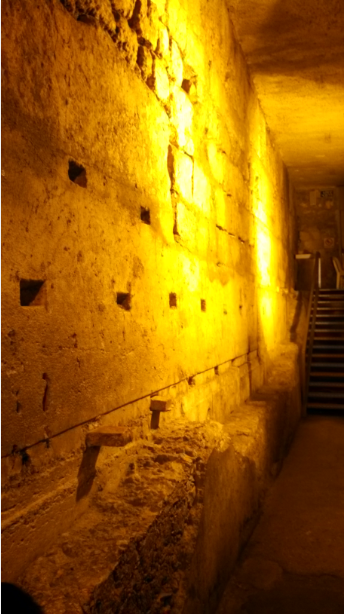 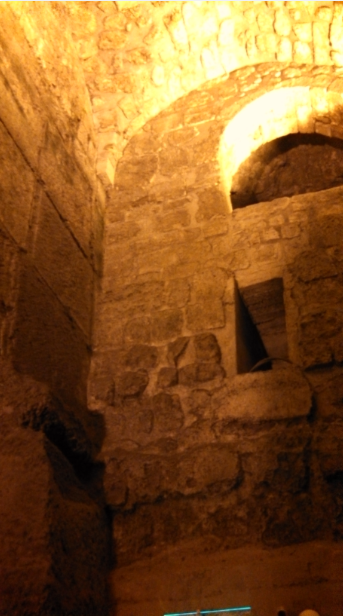 The tunnel tour starts at the Kotel but exits into the Arab section of the Old City. As we approached the exit, the guide told us not to worry, they always assign two guards (one in front, one in back) to escort visitors from the tunnel exit through the Arab section, and that we should follow the lead guard and not stop. Okay, two guards, no stopping, nothing to worry about here.

Just as we were about to exit, we were stopped by the guards and told to turn around, walk back the length of the tunnels back to the Kotel, because there were “issues” in the Arab section.

When I checked tonight, I found out what those “issues” were, via Times of Israel, 15 injured in Jerusalem rock-throwing attacks:

Fifteen Israelis were injured in Jerusalem on Thursday in two separate stone-throwing incidents near the Old City.

In the early afternoon, Arabs threw rocks at a bus driving past the Damascus Gate. A family of 12 — two parents and 10 children ranging in age from 1 to 19 — were injured along with another man and his son.

Paramedics arrived at the scene to administer first aid. Four of the injured were taken to Shaare Zedek hospital, one in moderate condition. The others were injured lightly, some suffering from shock.

Earlier in the day, an Israeli was injured lightly during a similar incident….

Police are not sure at this point what motivated the uptick in attacks, but Ben Rubi suggested that political developments or observance of the month of Ramadan could have played a role.

Trouble is never more than a stone’s throw away in Israel.

The good news is that because we had to exit through the Kotel, I got a chance on my last day in Jerusalem to put my own note in the Wall (mine is the one rolled up in the center top): 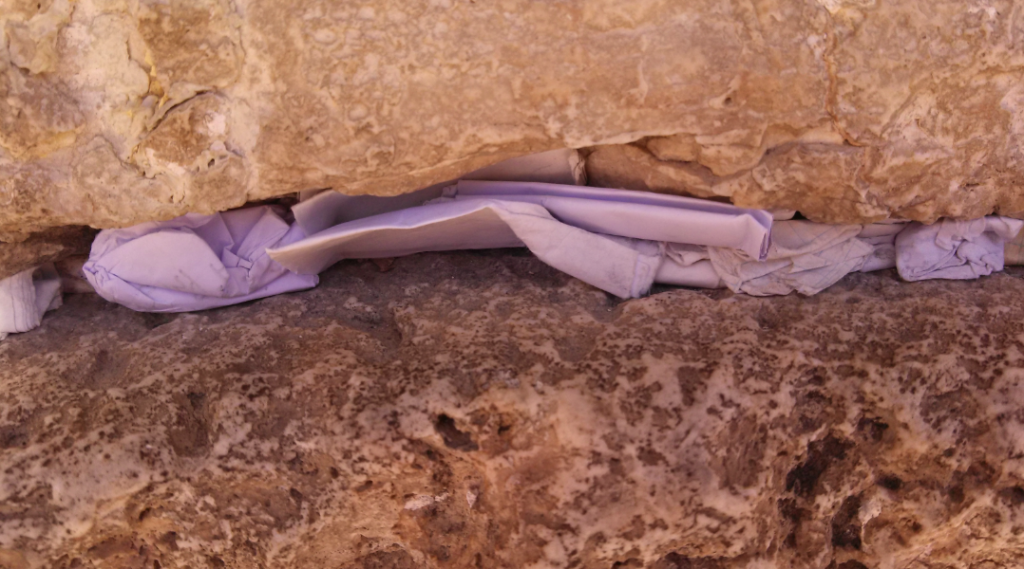 Any better news on Herod?

Someone still has Herod issues .

Suck it up babe – Herod rules even today.

Leading Nazi Hermann Göring was instrumental to Hitler’s reign of terror, but research suggests his brother Albert saved the lives of dozens of Jews. Israel must now decide whether he deserves to be honored as one of the “Righteous Among the Nations.”

I took a look at the link. If the information presented is true, then Israel has an obligation to this man to recognize his activities. It doesn’t matter who he is, or who he is related to…he saved Jews. To ignore him and what he did is a slap in the face to ALL the others who risked their lives and worked to save Jews from the Nazis.

To be brief, I am an observant Jew myself…but I genuinely believe that Alber Goering’s activities MUST be acknowledged by Israel!

The question is whether he risked his life. If he had Brother Hermann protecting him, and he was careful not to step over whatever line Hermann gave him, then he’s not eligible. For the same reason, diplomats are generally not eligible, because the worst the Germans could have done to them was ship them home.

This is a trip I would love to take myself one day. It must be amazing to be surrounded by thousands of years of history. My father traveled to every country in the world for work but found Israel by far the most fascinating. It is a pleasure to read your posts from this trip.

How fortunate you are to stand in the midst of history. Good for you, Prof.

The Western Wall tunnels are fascinating! As is the City of David excavations. I’m so glad you went on a tour there. These two areas make visually clear Jerusalem’s Jewish history as much as any number of history books.

I found both tours intensely moving.

Since ancient times, Jerusalem has been known as the center of the world…

Truly the Law of the Lord proceeds out of Zion Isaiah 2:3

The Law and the Way that governs man best and creates a just and righteous people was given by G-D to the Jews.

The way of love, joy, peace, forgiveness, life, righteousness, justice, prosperity, redemption and salvation is from the Jews. All societies who follow G-D’s Commandments and way are blessed. When they violate these, they become captive to the enemy of souls, base inner inclinations and foreign military conquests that enslave them. This has been true since ancient times and we are seeing this today.

(As a Christian, my faith is in the teaching and work of a certain Jewish Carpenter who died as my sacrificial lamb and my scapegoat, just outside the gates of Jerusalem.)

1. Map – Jerusalem – the Center of the World – http://www.pbs.org/newshour/indepth_coverage/middle_east/slideshow_jerusalem/media/map.jpg

2. Jerusalem – the movie – http://www.jerusalemthemovie.com I don’t know if this movie has been released, but the trailer is fabulous and a great accompaniment for our vicarious journey to Israel courtesy of Professor Jacobson (and Mrs. Insurrection).

Thanks for the reports from your journey! May you continue to be safe and very blessed in the eternal peace of Jerusalem.

Here is that verse (highlighted) from Isaiah in its beautiful, hopeful context:

This is what Isaiah son of Amoz saw concerning Judah and Jerusalem:

In the last days, the mountain of the Lord’s Temple will be established
as chief among the mountains;
it will be raised above the hills,
and all nations will stream to it.

Many peoples will come and say,

“Come, let us go up to the mountain of the Lord,
to the house of the G-D of Jacob.
He will teach us his ways,
so that we may walk in his paths.”

The Law goes out from Zion,
The Word of the Lord from Jerusalem.

He will judge between the nations
and will settle disputes for many peoples.
Theyw ill beat their swords into plowshars
and their spears into pruning hooks
Nation will not take up sword against nation
nor will they train for war anymore.

Come, O House of Jacob,
let us walk in the light of the Lord.

Please forgive the typos…I promise to preview from now on.

“We then toured the Western Wall tunnels. I learned a history of which I was not aware. The visible wall is only part of the original wall, and depending on location, it extends as much as three stories below street/ground level.”

Yes, the basic foundation of the Temple is intact. We were all taught the the Kotel was the only part of the Temple that remained, and that the rest was destroyed. Not True. The Temple walls go all the way around – all four sides. The Romans were unable to destroy the Temple because the stones were so massive so they gave up and buried it and told everyone that it had been destroyed.

The Temple is still there. The Jews are still there. The Romans, Babylonians, Assyrians, Egyptians, Philistines, etc etc – all are gone. A t-shirt I saw in Israel lists all these civilizations that tried to wipe out Israel, and points out that they are no longer exist while Israel is strong and thriving. The list ends with: “Hamas – In Process”

Exactly . Praise be to Herod .

If not for him – nothing.