We landed late on Saturday in a very uneventful overnight trip non-stop from JFK.

The first day or two are going to be time adjustment days, since Israel is 7 hours ahead now.

We walked around Tel Aviv from the central area (near the Hadima Theater) where we are staying past the Carmel market.  Some vendor told me that he had the best dates and figs in all of Israel, and I believed him! 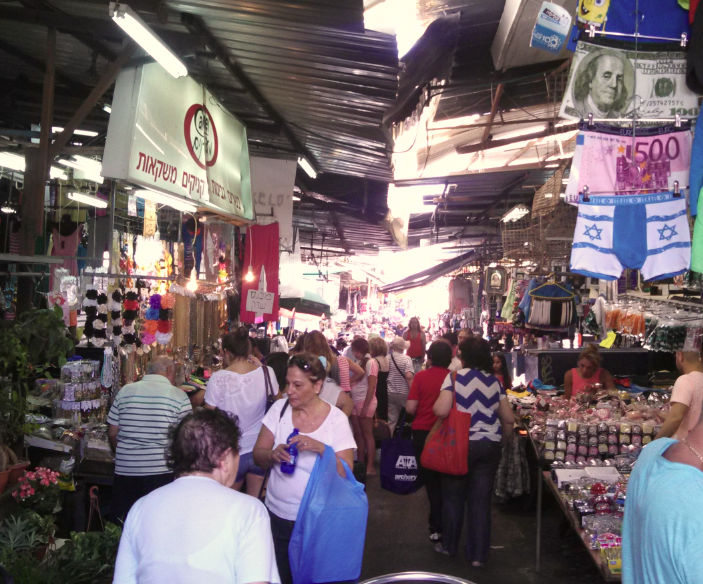 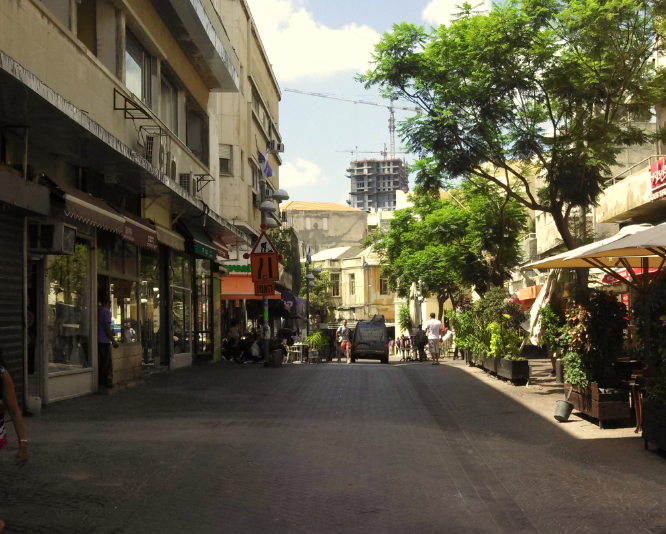 (Old section of Tel Aviv with skyscraper construction in background) 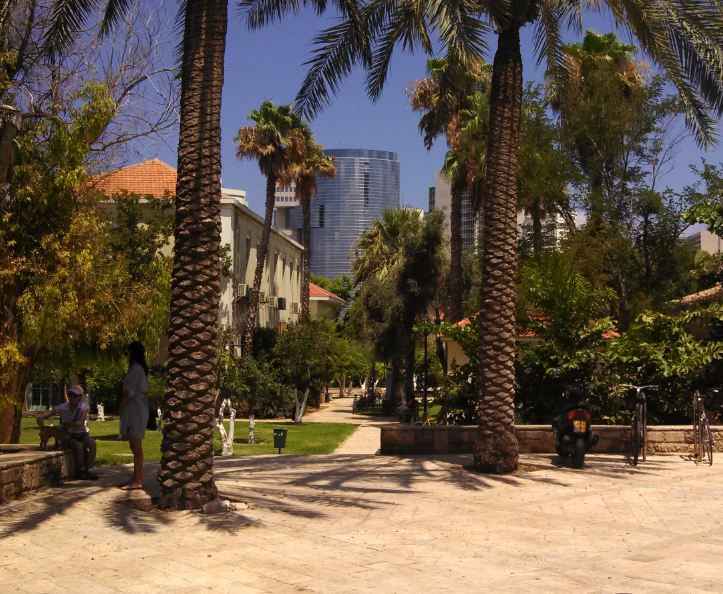 (Old section of Tel Aviv with skyscraper in background)

Finally we headed to Jaffa along the beach. 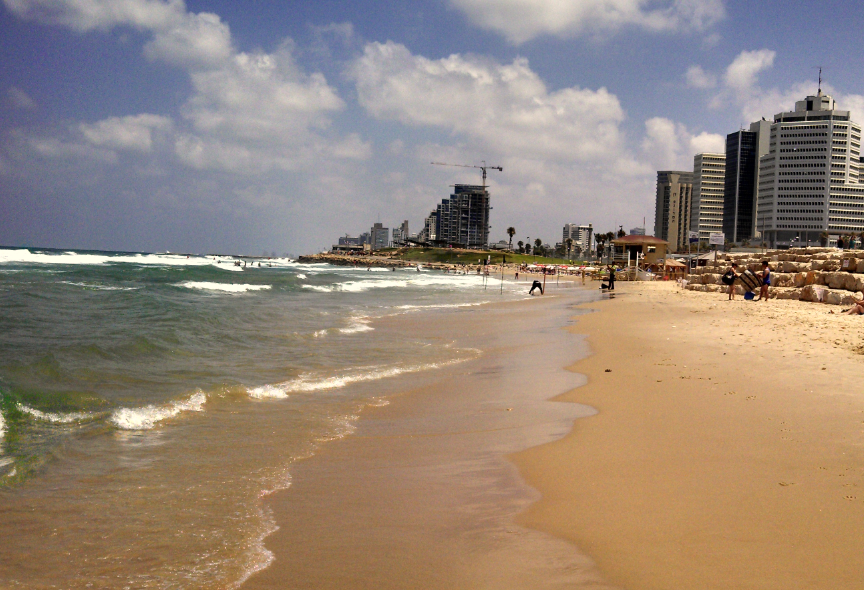 This photo was trickier to properly crop than you think.  It’s true what they say, the Mediterranean adds 10 lbs to every picture, but I think I managed to cut most of that out. 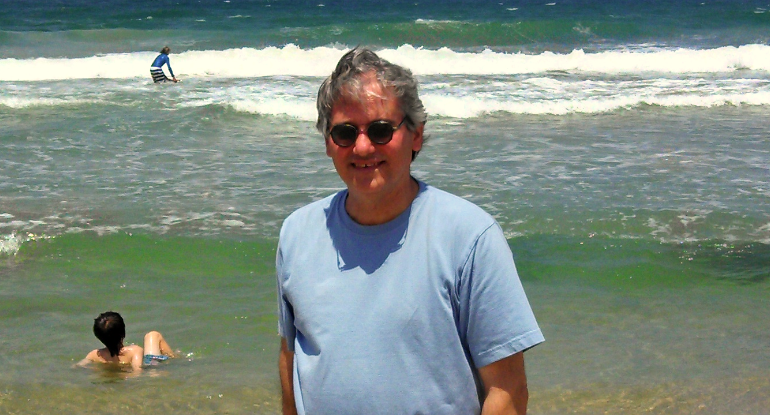 (Me on the beach in Tel Aviv)

And in the seventh hour of walking, we rested.

A pic of you on the beach with no Speedo?

Fabulous photos Professor. It is an amazing country where the ancient meets the cutting-edge modern (did you know that Israel is 2d, only to the USA, in NASDAQ listed companies?). And it is an island of democracy surrounding by Islamo-fascist regimes. And the food…makes my mouth water to think of the great hummus, olives, fresh fruits and vegetables…home grown through the “miracle” of drip irrigation, pioneered by the Israelis. Make sure you treat Mrs. Insurrection to some nice things, she deserves it! And I’m sure you both deserve a well-earned break. Looking forward to your posts from overseas.

Yes, I hope the professor does treat his wife to something special on their trip!

Um, I want heads to explode in my neighborhood, so please being me a tee with Israeli flag and Hebrew writing.

Would you like a Israeli coastal guard hat, or some IDF engineer badges? Hat was a bit tattered when I got it, but the symbol and name is clear.

Good morning, Aridog. Thanks for the offer! I won’t deprive you of the hat, but a badge would be nice.

Email me the address to mail the badge to and it’s yours. Profiles don’t show up on LI, but my email is also in my Google/Blogger profile.

Not since Eisenhower on D-Day Plus One has a man been so relieved at not having to read publicly his letter taking full responsibility for a complete disaster on foreign beaches.

” … The troops, the air and the Navy did all that Bravery and devotion to duty could do. If any blame or fault attaches to the attempt it is mine alone.”

And, Like Ike, also in my back pocket shall remain the little note penned in case of a complete debacle on the beaches of Tel Aviv:

“I’m speaking now for all middle-aged white men in speedos with a bit of a paunch … I’m sorry for this stuff.”

With special thanks to co-apologist Chris Matthews for his advice and assistance.

As someone who’s met the good Professor, he’s actually in excellent shape. He’s more like a dolphin than a whale. The sudden jumps and backflips can become annoying, though.

Professor, will you get a chance to meet any LI readers over there, like Anne in Petach Tikva, or Caroline Glick?

Looks like no one warned you to use sunblock until it was too late. That happens to us all… Nice Big Sun-Roasted Smile!!!

I am very confident you are having a wonderful time and wishing we all could be there.

Oh, I love the pictures. It all looks so beautiful. Have a wonderful, relaxing time, Professor.

Do people know who you are? Are you asked any questions about the Zimmerman trial? And, what about the style of fighting, “MMA?” In the IDF, Israelis are not only trained in how to shoot, they also learn a martial arts called “Grav Maga.” (It’s how to quickly kill an attacker. There are no “nicesties” about it. No handshakes. No bowing.)

Have Israelis heard of obama’s 17 minute rant? Do they know Kerry is back with another peace proposal? And, there’s a good chance Israel will be pushed back to it’s pre-1997 borders. Which takes Jerusalem out of Israeli hands. Are people just quiet?

There’s a difference between being mugged. Where you’re stunned by being punched in the nose. And, actually falling down and letting obama, or any mugger, beat the living daylights out of ya.

(By the way, kerry pulled his stunt on Friday night, just as Shabbat began. Which put all the religious politicians out of touch.) Do Israelis just shrug and say “it’s just like Oslo? In time it just dies on the vine?”

Your trip will fly by in a flash. But you’ll remember the events for a very long time. Everybody I know whose traveled to Israel feels as if they just returned home yesterday.

Good questions and we know you meant 1967.

It is “krav maga”
From Wikipedia: “It was derived from street-fighting skills developed by Hungarian-Israeli martial artist Imi Lichtenfeld, who made use of his training as a boxer and wrestler, as a means of defending the Jewish quarter against fascist groups in Bratislava in the mid-to-late 1930s. In the late 1940s, following his immigration to Israel, he began to provide lessons on combat training to what was to become the IDF, who went on to develop the system that became known as Krav Maga. It has since been refined for civilian, police and military applications.”

Uncle Samuel went to Israel for 10 days in the Fall of 1978 – a wonderful treasured memory. I could stay forever. Oh the beauty.

If you get a chance when you’re in Jerusalem take a ride on their light rail system. It’s a relatively modern overhead line system with 23 stops that runs approximately 14 km long. I have all of the stops geocoded if you would like that? I’m a bit of a light rail buff.. my goal is to ride all of them! Haven’t made it to Israel yet 🙁

Tel Aviv has some of the best beach you’ll ever find. A few blocks north of where the professor is standing the beaches get better. Fewer Arabs, less filth. From the costal road it’s almost two blocks of sand to the waterline. Restaurants are located at the edge of the sand and most have chairs and tables out on the sand where you can sip a drink and watch the cuties. And cuties they are. Israeli women are some of the best looking women you’re going to find. And they’re all in shape from jogging or bike riding. Not a JAP in sight. I’m sure they’re around somewhere, but JAP is purely American.

I don’t think the Professor harbors any ill feelings towards Arabs who don’t hate Jews. I really don’t. I remember him once gently taking someone to task who made a broad anti-Palestinian people remark once. So, I don’t think he minds sharing a beach with them.

As for JAPS, the phenomenon appears in most cultures I can think of. Just ask my Japanese wife about the spoiled, rich Japanese girls who think their sh*t doesn’t stink whom she’s had to endure at times in her life. Yes, JAP JAPs.

When I decided to put our daughter in an all-girls Catholic high school to keep the boys away from her, my mother half-joked,

“Are you sure you want to do that? When I was a young girl, the Catholic girls were known as the bad girls.”

I told her, “Mom, this isn’t your Chicago of the 1930s. Maybe that was true then, but this is a different situation … different time, different place, different people.”

A large percentage of the girls turned out to be little cliquish, back-stabbing monsters, and our daughter pleaded to get out.

Mom was right. She just got lucky.

Moral of the story:

JAPs are everywhere. And, disproportionately common to mean girls of all stripes, they can be so damn sexy at times that it’s just infuriating.

That bad girl line about some Catholic school girls exists across time and countries. When i was geowing up, the stories you would hear about the girls who went to the convent school!

I like to keep up with insults if it is one.

Thank you. I love seeing the pics.

Yay! Welcome Professor! Hope you’re having a great time and sleeping off your jet lag. 🙂

Don’t forget the Altalena. I’m sure there’s a memorial somewhere on the Tel Aviv beach. You know, of course, that Ben Gurion order Yitzhak Rabin to fire on the Jews aboard the ship. Even after some men jumped into the water, and the ship was burning, the firing didn’t stop.

Ben Gurion’s argument was that ONLY ONE ENTITY could have an armed force. So Begin lost his men. Even though Begin was on board the ship. And, had offered most of the arms being shipped in to the Haganah.

Who’s gonna tell ‘Dad’ that Rags went out in his ’68 Camaro SS convertible and rolled it?

The beach pictures warm my heart.

Another Israeli reader here. Would love to meet you (and any other readers) while you’re here.

[…] Commenter Vince suggested that I check out the light rail project, and bemoaned the fact that he had not yet been on it: […]