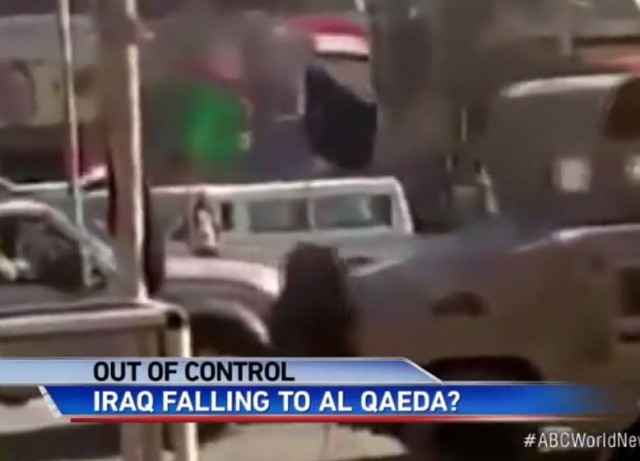 Posted by Bruce Carroll on June 13, 2014 24 Comments
Media and civilian reports throughout northern and central Iraq on Friday suggest that the situation on the ground has become increasingly violent and unstable to the point that the Iraqi government is crumbling:

Heavily armed Islamist militants flush with $450 million in stolen cash pushed toward Baghdad on Friday, sending thousands fleeing in fear from the Iraqi capital. Al Qaeda-linked insurgents who overran large parts of the north of the country earlier this week also seized about $450 million during a bank heist, Mosul Mayor Athier Nujaifi told NBC News. That makes the Islamic State of Iraq and al-Sham (ISIS) the world's richest terrorist group.

The ISIS troops are led by Abu Bakr al-Baghdadi (or Abu Dua) was once held by the US in Camp Bucca Iraq. al-Baghdadi was captured by U.S. forces in Iraq, but released by the Obama Administration in 2009. On his way to a visit to North Dakota, President Barack Obama held a brief statement and exchange with reporters on The White House lawn. Unfortunately for the President, events are deteriorating so fast around Baghdad, it may be too late for the United States to do anything before the ISIS/Sunni insurgents take the Iraqi capital. Reporters didn't ask specific questions about the failure of Obama to leave U.S. combat troops in Iraq after 2011 or his failure to complete a Status of Forces Agreement with the Iraqi government.
Read More

Will an independent Kurdistan emerge from Syria-Iraq chaos?

Posted by William A. Jacobson on June 12, 2014 18 Comments
We've been writing about the lack of a free and independent Kurdistan for years, It’s time for a free and independent Kurdistan. While the Palestinian agenda has dominated every international forum, the much more populous and ethnically distinct Kurds have been mostly ignored.  In part, this is because the Kurds span several nation states created by colonial powers after the implosion of the Ottomon Empire.  Turkey particularly has threatened war if a Kurdish nation emerges. In part it is because creating an independent Kurdistan does do not serve a political purpose of snuffing out the only Jewish state in the region. Developments are moving fast that could change everything. Syria lost control of its Kurd territory during the ongoing civil war, and the autonomous Iraqi Kurdistan has operated independently for years. With Iraq losing control of vast territory, and the U.S. not anxious to do anything to help, the Kurds have claimed Kirkuk for their own, as the BBC reports, Iraqi Kurds 'fully control Kirkuk' as army flees:

Iraqi Kurdish forces say they have taken full control of the northern oil city of Kirkuk as the army flees before an Islamist offensive nearby. "The whole of Kirkuk has fallen into the hands of peshmerga," Kurdish spokesman Jabbar Yawar told Reuters. "No Iraq army remains in Kirkuk now." Kurdish fighters are seen as a bulwark against Sunni Muslim insurgents. 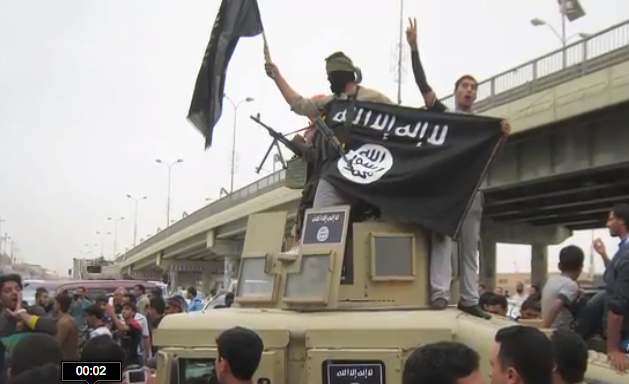 Posted by Bruce Carroll on June 11, 2014 35 Comments
Al-Qaeda aligned terror groups have made major land gains from the Syrian civil war into the heartland of Iraq over the last several days. Despite the herculean efforts of the United States military with the Multi-National Force in Iraq from 2003 to 2011, Iraq appears to be sliding into violent chaos across much of its territory between Baghdad and the border with Syria. Fueled by training in the Syrian civil war and allowed by the vacuum of no major U.S. forces in Iraq, the al-Qaeda-linked Islamic State of Iraq and the Levant (ISIS), is poised to take control of the most land mass since al-Qaeda formed in the late 1980s. According to videos posted by ISIS on social media, the militants also captured U.S. Humvees and Blackhawk helicopters from the Iraqi forces. So far this week, ISIS forces have captured Tikrit -- the former home of Saddam Hussein and his political movement -- and Mosul, Iraq's second largest city.  As ISIS forces converged on Mosul on Tuesday, U.S.-trained Iraqi forces collapsed and fled the city.  Tikrit is less than 100 miles from Iraq's capital of Baghdad, while Mosul is just 225 miles to the northwest from Baghdad.

"The city of Mosul is outside the control of the state and at the mercy of the militants," an interior ministry official told the Agence France Presse news agency, saying soldiers had fled after removing their uniforms. Several residents told the Associated Press that the militants were now touring the city with loudspeakers, announcing that they had "come to liberate Mosul and would fight only those who attack them."

Reports from Mosul detail mass beheadings of residents by the ISIS terrorists and a flood of hundreds of thousands of refugees out of the city. The al-Qaeda aligned ISIS organization now effectively controls a region from the eastern Syrian city of Raqaa, over the through the western Iraqi desert up to northern Iraq and less than 100 miles from Baghdad.
Read More 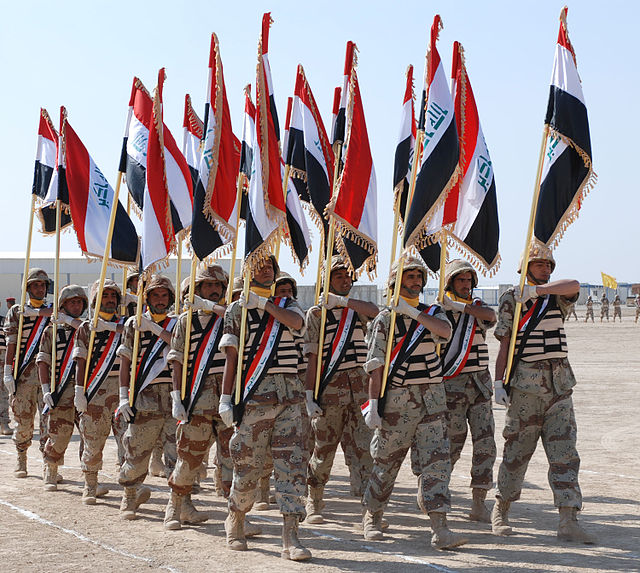 Posted by New Neo on June 10, 2014 14 Comments
As soon as Obama was elected it became a foregone conclusion that this would be the result in Iraq---that the country would be taken over by the worst forces in the area. Since then, it's been a slow denouement:

Insurgents seized control early Tuesday of most of the northern Iraqi city of Mosul, including the provincial government headquarters, offering a powerful demonstration of the mounting threat posed by extremists to Iraq’s teetering stability. Fighters with the Islamic State of Iraq and Syria (ISIS), an al-Qaeda offshoot, overran the entire western bank of the city overnight after Iraqi soldiers and police apparently fled their posts, in some instances discarding their uniforms as they sought to escape the advance of the militants... The collapse of government forces in Mosul echoed the takeover earlier this year of the town of Fallujah in western Anbar province, where U.S. troops fought some of their fiercest battles of the Iraq war...

The Iraqi government is asking for international and/or US help, "by virtue of the Joint Cooperation agreement between the two countries." But that horse left the barn a long time ago. As a result of Obama's decisions regarding the Iraq pullout, there are not even any residual US forces left in the country, as remain in so many other places where Americans have fought and died:
Read More

Posted by William A. Jacobson on January 08, 2014 29 Comments
Expect former Secretary of Defense Robert Gates to quickly be turned from hero of the Democratic Party for being a Republican willing to work for Barack Obama, into just more trailer trash because of his tell-all book about that service which reinforces an accurate meme about Hillary Clinton: She has no core, and will say anything to win. From Chris Cillizza at WaPo, How Bob Gates’s memoir could haunt Hillary in 2016:

In a new memoir of his time as secretary of defense in the Obama administration, Gates writes: “Hillary told the president that her opposition to the [2007] surge in Iraq had been political because she was facing him in the Iowa primary. . . . The president conceded vaguely that opposition to the Iraq surge had been political. To hear the two of them making these admissions, and in front of me, was as surprising as it was dismaying.” Oomph. Just to jog your memory, Clinton announced that she opposed the Iraq surge being pushed by President George W. Bush in the days leading up to the announcement of her presidential bid. She instead proposed a freeze in troop levels in the country and advocated for a troop increase in Afghanistan.... At one level, Gates's allegation is not at all surprising. Politicians factor in politics when making decisions? Gasp! .... But, remember this is Hillary Clinton we are talking about. And, the criticism that has always haunted her is that everything she does is infused with politics -- that there is no core set of beliefs within her but rather just political calculation massed upon political calculation. Remember that she began slipping in the 2008 Democratic primary when her opponents seized on an overly political answer on giving drivers' licenses to illegal immigrants during a debate in late 2007.

Cost of Political Posturing in Iraq

Posted by David Gerstman on January 08, 2014 12 Comments
At the end of October the New York Times hailed President Obama's foreign policy as "pragmatic," while largely ignoring the consequences. The two month old article was written by the White House reporter, but a recent article written from Beirut, Power Vacuum in Middle East Lifts Militants paints a somewhat less flattering picture of the administration's foreign policy.

For the first time since the American troop withdrawal of 2011, fighters from a Qaeda affiliate have recaptured Iraqi territory. In the past few days they have seized parts of the two biggest cities in Anbar Province, where the government, which the fighters revile as a tool of Shiite Iran, struggles to maintain a semblance of authority. Lebanon has seen two deadly car bombs, including one that killed a senior political figure and American ally.

John Kerry supported Iraq War everywhere but in his own memory

Forgotten History: Assad has the blood of American soldiers on his hands

The notion that Assad is only Syria's problem ignores the history of the Iraq insurgency, Lebanese assassinations, and the global Iranian-Hezbollah war against Israel and the United States....

The Washington Post endorsed Obama twice while noting a major foreign policy flaw. Why don't they acknowledge that they were wrong?...

It’s time for a free and independent Kurdistan

Why not? The Kurds out number Palestinians several times over, and unlike Palestinians, have a real ethnic and cultural distinction from surrounding Arabs (and in Turkey, Turks). But for Europeans drawing lines on maps and Turkish national ambitions, there should have been an independent nation for...

On “Responsibly Ending the War in Iraq”

"The gains of the surge are now in jeopardy ...

2007: Harry Reid and Dick Lugar agree, the Iraq surge is not working

Dick Lugar touts his foreign policy expertise and influence, something which Brian Bolduc at National Review today finds is suspect. One thing Lugar does not tout is that he joined Harry Reid in 2007 in announcing that the surge in Iraq was not working and should be stopped. Reid's...