“A perpetual adolescent called to do a man’s job.” 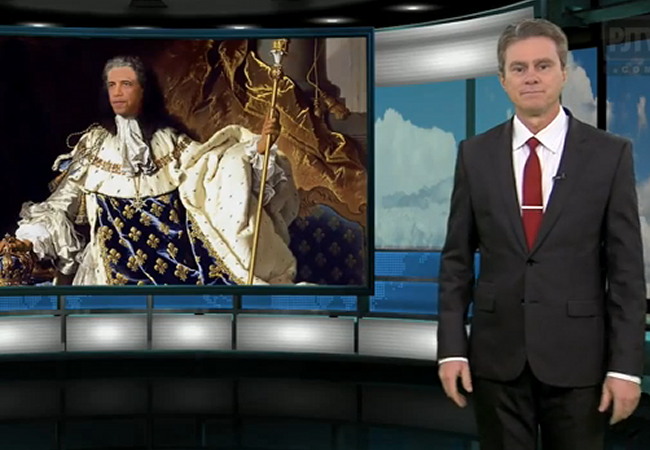 By now, you probably know I’m a big fan of Bill Whittle’s Afterburner videos from PJTV.

There are some historical similarities between Obama and King Louis XV of France and Bill points them out in the video below. He focuses on Obama with regard to foreign policy, the IRS scandal and government spending.

Earlier this month, I wrote a post at College Insurrection about a law professor from George Mason University who said that Obama has assumed king-like powers.

As they say, if the shoe fits.

Obama is figuring out that it doesn’t matter what horrendous things he does to this country, because after him will be a deluge anyway. He’s becoming entirely comparable to France’s Louis XV.

We want to hear from you. Please leave your thoughts in a comment.

“A perpetual adolescent called to do a man’s job” – a perfect summation of the Obama era. I have always been struck by how emotionally immature Obama was and essentially dumb he is (he is no better at being President of the United States 5 1/2 years into his reign than he was when he started back in January, 2009). Faux conservatives Christopher Buckley and David Brooks epitomized the mindless Obama worship when the former claimed that Obama had a first class temperament and the latter waxed adoringly about Obama’s pants crease.

Perpetual adolescents who have a death grip upon academia, the popular culture, Hollywood, and 90% of the news media. This has been built up for the past 50 years. Even though the Democrats for the most part kept losing presidential elections they never acted as if they were on the outside, on the contrary they were consolidating their hold upon the institutions that really matter in America and upon young minds. During the years when the GOP had control of the White House, the Senate and the Congress did it really seem as if they were in calling the shots?

no comparison of Queen Mooch?

Comparisons within MPD? Obama as Louis the X1V? as Louis XV?, Obama as Virginia Woolf?, Obama as Reinhold Niebuhr on powerful drugs, Obama as Macbeth?

Ah, for those days of yore, when the motto “Be Prepared” meant something to most people. Now, perhaps to some yet not enough.

So, now to be prepared means what? More importantly, perhaps, would be to ask: “why?” Maybe, also, “what do we prepare for?”

We’re so weak, right now, that I sincerely doubt there’s anything the U.S. can do on the foreign policy front to meet these issues head-on. Furthermore, I believe the Obama Administration does not have any cards left in their deck, and quite frankly have not for some time.

The best we can hope for is that nothing big lights off somewhere in the world, this guy doesn’t have the chops to deal with a crisis of any real magnitude.

The Boy King was massaged by his handlers and buddies in the media to be a dictator, “all things to all people”, and look at what happened. Sadly, he’ll probably cross the finish line with nary a scratch on him.

Why the fatalism among the vast majority who don’t support this Obama presidency any longer? How to overcome “disaster fatigue”? (Great new descriptive label, Mr. Whittle! #disasterfatigue indeed)

Finally, after the Bergdahl for Five Taliban swap, finally, I called my elected officials in Washington, my senators and congressman. And then the two Democrat senator offices from my home state, Minnesota, who recently stood up to the regime over Obama’s choice for US Ambassador to Norway – how courageous was that? I implored them to stand against “the executive branch” for more offenses that were contrary to their sensibilities.

So public opinion is quite solidly against the man. And perhaps the Republican party knows Impeachment can’t do anything with Democrats in the Senate, but are the Democrats immune to political pressure?

Well then, is all we can do is chat, post, comment, blog? We should start insisting ALL our elected officials have a serious consideration of putting our country ahead of party politics. #countryoverparty And encourage others to do the same.

One of Pres. ScamWOW’s cheap tricks has been a constant drumbeat of affronts to the Constitution and American values, along with a “crisis d’jure”.

Think about it…since the beginning of this mess, haven’t you felt under assault?