Approximately 275 military personnel to provide support and security for U.S. personnel and U.S. Embassy in Baghdad 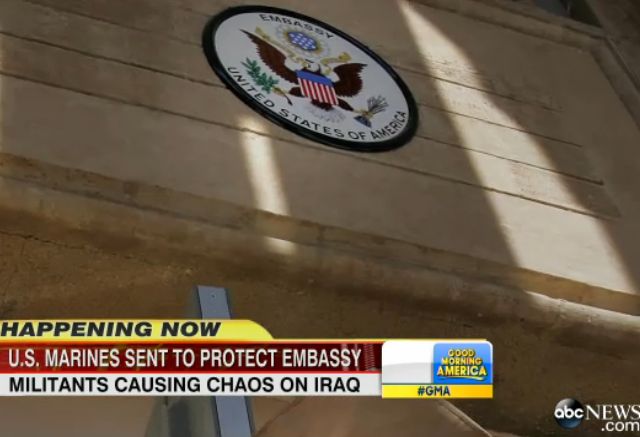 President Obama notified Congress on Monday that starting Sunday, June 15th, approximately 275 U.S. Armed Forces personnel were deploying to Iraq to provide security for the U.S. Embassy and its staff in Baghdad. (Read the full text of the letter).

President Obama notified Congress on Monday that about 275 U.S. military personnel are deploying to Iraq to provide support and security for U.S. personnel and the U.S. Embassy in Baghdad.

Obama also said the troops are equipped for combat and will remain in Iraq until the security situation becomes such that they are no longer needed. These forces are entering Iraq with the consent of the government there, White House press secretary Jay Carney said.

He said the report to Congress is consistent with the War Powers Resolution.

The Pentagon said 170 of the troops arrived over the weekend in Baghdad and another 100 were moved into the region to help with embassy security as some of the staff was being relocated in the area. The embassy remains open and operating.

While the US embassy remains operating, the State Department announced on Sunday that additional security personnel would be added to the staff in Baghdad, though some of its other staff would be temporarily relocated.

The United Nations also announced Monday that it has relocated nearly 60 of its staff from Baghdad to Amman, Jordan, according to Thomson Reuters.  A spokesman for the UN indicated that additional relocations could be possible in the next few days.

The news comes after insurgents have advanced in Iraq in recent days, and on Monday reportedly seized the northern city of Tal Afar, according to the NY Times.

Obama was expected to meet with his National Security team on Monday evening to consider options in response to the insurgency in Iraq.

White House Principal Deputy Press Secretary Josh Earnest said Monday that Obama will meet with his national security team Monday evening, after having directed them last week to prepare a range of options for U.S. intervention for his consideration. Obama ruled out deploying American forces on the ground as part of any effort to counter the ISIS offensive, but administration officials are contemplating other options, including airstrikes.

A spokesman for John Boehner said the Speaker of the House supports the deployment, but wants Obama to present a broader strategy for Iraq. “The Speaker supports the ongoing steps to secure US personnel and facilities in the midst of a fluid situation, but he still expects a comprehensive strategy to protect America’s national security interests in Iraq,” said Michael Steel. “We hope the President will offer such a plan in coming days. Too many Americans sacrificed too much to allow Iraq to slip back into chaos.”

A video report on the situation in Iraq is below, from USA Today.

The problem, of course, as Obama sees it, is the bad press he’s been getting since an Al Qaeda affiliate conquered a third of Iraq, which he deliberately abandoned with all possible haste. This will allow his press flunkies, ie. the entire legacy press, to give him a favorable news cycle.

Won’t do a thing to prevent the jihadis from completing their conquest, if they are able (the US won’t be standing in the way, but the Shiites might not want to be the victims of genocide). It won’t help save the US contractors north of Baghdad, currently surrounded by terrorists. It won’t save the embassy in Baghdad should the jihadis take the city. And, of course, it absolutely won’t do a single thing to defeat the terrorists and restore control of the north of Iraq to its elected government.

That number is eerily close to the number of Marines and others lost in the Beirut Barracks Bombing…….

We must conclude our SpecOps guys are being issued sneakers…

Picture ‘the fall of Saigon’…… remember the pictures of the ladders up to the roof for the helicopters ?

What? We’re not evacuating? This is insane. Those 275 people are dead men walking.

Gee. Armed US soldiers are needed to protect an embassy in a war zone. Who knew?

What are they, faux police officers? Expendables?

Sounds like he’s delivering some hostages so he can exchange them for the remaining Gitmo detainees. It’s not easy to imagine what other possible function this token deployment could have.

Some accounts have them being SpecOps guys, which would make some sense in light of the claims being made our intelligence is so crappy that we can’t fly bombing missions currently.

The operators would provide information to air planners. Otherwise, a total cypher as to what that number could do.

My thoughts exactly, more hostages. Hello President 0bama, now is the time to draw down the number of people at the embassy, like how many will comfortably fit in a small helicopter? Reduce the staff to that number. Give that embassy the same security staffing levels Ambassador Stevens got in Benghazi! Then hope nobody, and I mean nobody puts out a video defaming the anybody.

Obama should have sent 275 Associated Press “journalists”. They have proven they will fight harder for Obama than any special forces team.

Premature evacuation has bound our hands. It’s now Iraq’s responsibility to pick up the gauntlet and defend their interests and lives.

Especially after Benghazi, I would have thought the embassy in Baghdad would already have had a very strong security force in place, at least a few hundred Marines.

I’m still wondering where the hell all those guys are.

Were they just disbanded and frittered away…???