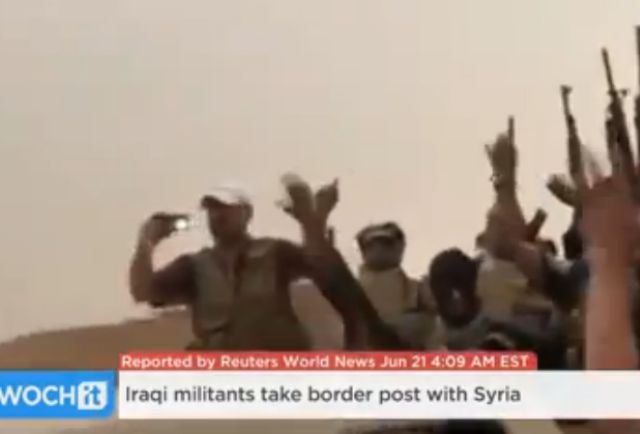 Militants led by ISIS have reportedly seized a border post at one of the border points between Iraq and Syria, as the situation in Iraq continues to remain unstable.

Sunni fighters seized a border post on the Iraq-Syria frontier, security sources said on Saturday, smashing a line drawn by colonial powers almost a century ago with the aim of creating an Islamic Caliphate stretching from the Mediterranean Sea to Iran.

The militants, led by the Islamic State in Iraq and the Levant (ISIL), first moved into the nearby town of al-Qaim on Friday, pushing out security forces, the sources said.

Once border guards heard that al-Qaim had fallen, they left their posts and militants moved in, the sources said.

Sameer al-Shwiali, media adviser to the commander of Iraq’s anti-terrorist squad, told Reuters that the Iraqi army was still in control of al-Qaim.

A senior Iraqi official also said the towns of Rawa, Ana and Huseiba were under the control of militants, according to CNN.

The border crossing of Al-Qaim is significant because of its location, as it would allow militants easier access between Syria and Iraq. 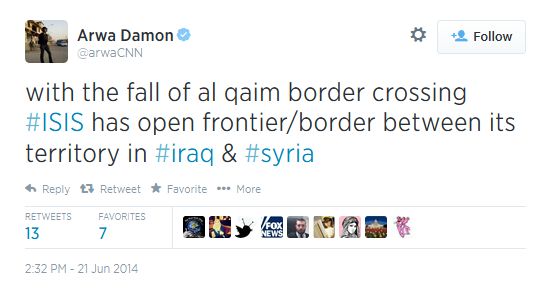 Al-Qaim sits across from Syria’s Deir Ezzor province, where ISIS controls at least three towns, including areas near the military airport of Deir Ezzor, which was the headquarters of the military council for rebel battalions, said Syrian Observatory for Human Rights, an opposition group in London that monitors the Syrian conflict.

“This advancement (in Syria) is considered a very important and strategic step because ISIS has tried to take a complete control over areas in the east of Deir Ezzor in order to reach to the Syrian-Iraqi borders, and then to connect its held areas in both Syria and Iraq with each other,” the opposition group said.

The situation in Iraq has become increasingly unstable in recent days, after insurgents last week overran other parts of the country.

The situation has of course also prompted the U.S. to consider options on how to assist Iraq in dealing with the crisis. While President Obama emphasized Thursday that “American forces will not be returning to combat in Iraq,” he did announce that we would be sending up to 300 military advisers to the country.

In addition, Secretary of State John Kerry is scheduled to travel to the Middle East and Europe next week to discuss the stability of the region.

From the Associated Press via FOX News:

Secretary of State John Kerry is heading to the Mideast this weekend to discuss Iraq’s stability as a raging Sunni Muslim insurgency threatens the Shiite-led government.

The U.S. is offering limited assistance to Iraqi Prime Minister Nouri al-Maliki but wants him to take dramatic steps to soothe Sunnis who say they have been shut out from his government.

The State Department said Friday Kerry will meet next week with officials in Amman, Jordan, on the border with Iraq.

Officials had said that Kerry planned to visit Iraq soon but did not say when.

Obama knows he blew it by failing to obtain a SOFA agreement with the Iraqis before pulling out all U.S. support for that government. He is totally screwed because of that decision which he wanted. But he can never admit to making an error.

He now realizes he is in a trap of his own making: either he admits to an error and begs Congress (or acts with his pen and his phone) for authorization to defend the government in Baghdad, at the risk of alienating the Sunnis, or he does not, thereby allowing the Iranians to “save” the Iraqi government thereby empowering Iran and, perhaps, enabling Iran to profit from Iraqi oil and from annexing Iraqi territory.

The 300 troops do not allow him to escape this trap which holds all his limbs.

But the new caliphate will grant universal maternity leave.

Obama could have helped out Iraq with airstrikes that would have decimated ISIS on their open march and when they shuttled US military materiel to Syria. He chose not to. He is instead watching come to fruition, in the establishment of her caliphate,mhis discussion with the Muslim Brotherhood at Al Shams, or whatever the place is called.

One lesson that Iraqi “soldiers” have learned from this conflict with ISIS is that putting down arms, changing clothes, and running away is not an option. The Iraqis thought they were fighting Westerners. They discovered, to their horror, that they are fighting Muslims like themselves for whom any barbarity on the battlefield is acceptable.

I would bet many of those who were rounded up and shot, if they’d been given a choice, would have preferred a panty on the head rather than a bullet to it.

Both groups have always been a composite of Islamic jihadists from almost every nation on earth, including the US, UK, Canada, EU and former Russian provinces.

These were never native rebels in an earnest uprising. Obama intentionally ignored and let die the only earnest uprising against oppression – in Iran. Obama and company are really on the side of Al Queda, ISIS, Hezbollah, Hamas, etc.

Evidence for this – Obama reconstituted the leadership of the Taliban using the prisoner exchange as a cover; Obama supported the Muslim Brotherhood in Egypt and Al-Quaida in Lybia; Obama has included hundreds of Muslim Brotherhood agents in his government,

And lastly Obama gave witness before the whole world when at the UN he said that the future cannot include those who would slander the Prophet of Islam.

[…] ISIS sweeping across Iraq, capturing major cities and even taking control of an Iraq-Syria border crossing, there is huge concern of an escalating sectarian war exploding in the region.  Here is a […]