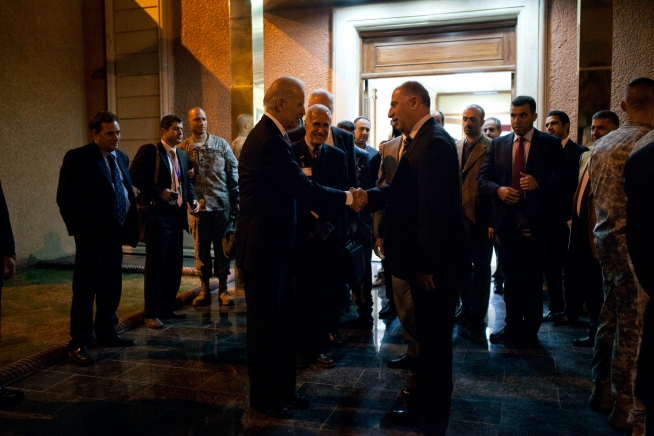 To refresh your memory in light of recent events in Iraq, this is how it went down in there in 2011:

The popular explanation is that the Iraqis refused to provide legal immunity for U.S. troops if they are accused of breaking Iraq’s laws…

But Mr. Maliki and other Iraqi political figures expressed exactly the same reservations about immunity in 2008…Indeed those concerns were more acute at the time…So why was it possible for the Bush administration to reach a deal with the Iraqis but not for the Obama administration?

Quite simply it was a matter of will: President Bush really wanted to get a deal done, whereas Mr. Obama did not. Mr. Bush spoke weekly with Mr. Maliki by video teleconference. Mr. Obama had not spoken with Mr. Maliki for months before calling him in late October to announce the end of negotiations. Mr. Obama and his senior aides did not even bother to meet with Iraqi officials at the United Nations General Assembly in September.

The administration didn’t even open talks on renewing the Status of Forces Agreement until…a few months before U.S. troops would have to start shuttering their remaining bases to pull out by Dec. 31. The previous agreement, in 2008, took a year to negotiate.

The recent negotiations were jinxed from the start by the insistence of State Department and Pentagon lawyers that any immunity provisions be ratified by the Iraqi parliament—something that the U.S. hadn’t insisted on in 2008 and that would be almost impossible to get today…

[Obama] also undercut his own negotiating team by regularly bragging—in political speeches delivered while talks were ongoing—of his plans to “end” the “war in Iraq.” Even more damaging was his August decision to commit only 3,000 to 5,000 troops to a possible mission in Iraq post-2011. This was far below the number judged necessary by our military commanders…

Iraqi political leaders may have been willing to risk a domestic backlash to support a substantial commitment of 10,000 or more troops. They were not willing to stick their necks out for such a puny force. Hence the breakdown of talks.

In typical Obamite fashion, Obama wanted to give the semblance of trying while actually undermining what ought to have been his own efforts. That way he could blame the Iraqis for what he’d always wanted to do anyway: completely withdraw.

And why would he want a complete withdrawal? Placate the base, of course. The negotiations were concluded a mere year before the 2012 election. It was all about fulfilling his promise to leave that country, and he was very impatient to do so.

Of course, back when he was campaigning for his first term, he didn’t state it exactly that way (from a speech given by Obama in July of 2008; emphasis mine):

True success will take place when we leave Iraq to a government that is taking responsibility for its future – a government that prevents sectarian conflict, and ensures that the al Qaeda threat which has been beaten back by our troops does not reemerge. That is an achievable goal if we pursue a comprehensive plan to press the Iraqis stand up.

To achieve that success, I will give our military a new mission on my first day in office: ending this war. Let me be clear: we must be as careful getting out of Iraq as we were careless getting in. We can safely redeploy our combat brigades at a pace that would remove them in 16 months. That would be the summer of 2010 – one year after Iraqi Security Forces will be prepared to stand up; two years from now, and more than seven years after the war began. After this redeployment, we’ll keep a residual force to perform specific missions in Iraq: targeting any remnants of al Qaeda; protecting our service members and diplomats; and training and supporting Iraq’s Security Forces, so long as the Iraqis make political progress.

I strongly doubt he even meant what he said back when he said it. It was just stuff to say that sounded good. Whether you believe Obama is actually pro-jihadi, or whether you just believe he doesn’t mind Iraq turning into a cesspool because Obama can then blame the whole thing on Bush is almost irrelevant at this point. The effect is the same.

And of course leaving a small residual force would hardly have guaranteed the success or even the relative success of the Iraq endeavor. But not leaving one was a recipe for catastrophic failure.

“Let me be clear: we must be as careful getting out of Iraq as we were careless getting in.”

Think anyone in the MSM will ask Barry about this statement of his, and ask him if he has any regrets about his subsequent carelessness in pulling our troops out of Iraq (e.g., ignoring his military advisers’ advice, blowing off Maliki, not negotiating a SOFA, etc.), now that his carelessness had led Iraq to become a failed state and a new headquarters for Islamic terrorists?

Whether you believe Obama is actually pro-jihadi…

Well, it is progress; 3 years ago, it would have been “Whether you believe Obama is incompetent…”.

I give it 6 months and that sentence will read, “As Obama conducts jihad…..”

The American people are waking up. We will win this.

Does anybody besides me remember that Hill-larry set up her own 5000 member State Dept. “army”, complete with air assets?

I mean, presumably, she had her choice of vets who were proven in combat and all. What happened to them?

I don’t believe he is pro-jihadist. He is just anti-American in any form that any of us would recognize the term “American”. Plus, he is a moral coward and has no sense of…well…most subjects.

http://www.youtube.com/watch?v=XKGdkqfBICw
I have a hard time understanding how a non muslim could ever utter the phrase “my muslim faith.” Of course, not all muslims are jihadists, we are told.

The rest are on a delayed timer which activates once they read the Koran.

More background, with quotes from people who were there at the time, and resisted Pres. ScamWOW’s “quitting” program.

ISIS Islamists are burning down churches, claiming responsibility for kidnapping 3 teens, including an American citizen and are killing people by the thousands…while Obstinate Oblivious Obama golfs, parties and fund raises.

I remember this. The issue came up, Obama walked off, leaving the Iraqis with their mouths hanging open.

Obama used a legitimate, workable issue (the Iraqis are supposed to have sovereignty) as an excuse to torpedo the talks. It was shameful then, and it has shameful consequences.

And now, the Democrats are saying that the Iraqis are just hopeless and unfit to govern, although we still have troops stationed in Europe and Japan.

We knew what was needed to keep the peace in Iraq. Obama decided not to do that.

After all the posturing and the protesting, the left needed their “victory” of proclaiming Iraq a failure.

ISIS leader (released by Obama) told the American Army Col. Kenneth King, then the commanding officer of Camp Bucca, as he left, “See you in New York.”

American air and drone power could stop ISIS without a doubt, but Obama being an Islamist/Black Supremacist, will not do so.

ISIS loaded up American military vehicles on a truck and sent them into Syria. Obama could have had the truck bombed and those vehicles destroyed. He did not, just like he did not destroy the drone that fell into Iranian hands. Now the Iranians have cloned the drone.

Obama wanted to supply the terrorists with American materiel and he has, just like he wanted to give Iran a drone, and just like he is bringing in a illegals to colonize America.