David Gregory is returning from vacation for an exclusive interview with Obama on Sunday.

I can’t wait for the topic of strict enforcement of gun laws to come up.

Excited to announce that President @barackobama will be my exclusive guest this Sunday on @meetthepress nbcnews.to/W9Ykim #MTP 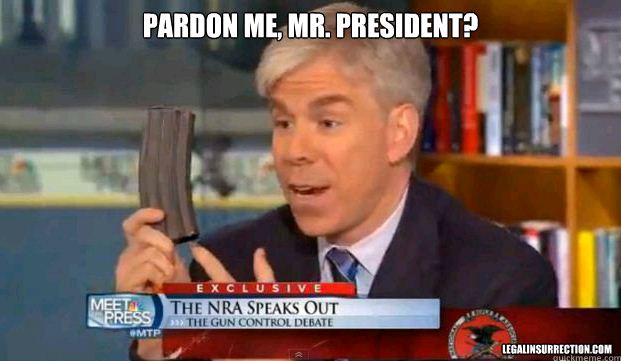 (Created by Legal Insurrection via Quickmeme)

White House petition to press charges against David Gregory for possession of a 30-round, high capacity assault rifle magazine in Washington D.C at half-way mark to 25,000 threshold to get presidential response. Please tell all your friends to sign the petition.

Somewhere, lurking in the shadows of Washington DC, David Gregory is still bitterly clinging to his “assault magazine”. We must take this dangerous nut off the streets.

I just love how the MSM continue to push for a 2nd Amendment change, Then we will work on 1st amendment for them if we can pull them out of Obamas …

Gee, Barbara Walters asked the President how he keeps his marriage hot. I doubt David Gregory can top that!

Will Gregory be searched right before Obama is on Meet the Caressed?

So Gregory is under investigation for violating the assault weapons ban, and the Secret Service is going to let him get close to the President?

They are going after knives next.

Knives in public have been banned in Britain since 1996 under the Offensive Weapons Act. “Combat knives” (sort of “assault weapons” for knives) were banned the following year. This is just a proposed extension of what they already have to cover pointed cooking knives as well.

This is why it’s so hard to make a reductio ad absurdum argument against liberals: They keep using them as ideas for new legislation.

Am I to assume by this that pornography is now permitted on Sunday morning television?

(Pardon me… I must excuse myself in order to vomit)

Please ask him this question for me:

How long have you suffered from Media Diplomatic Immunity Syndrome?

I mean, being a self-righteous, blame-America-first lefty media type of guy, who, nonetheless, finds himself grudgingly residing within the Great Satan … the symptoms are unmistakable.

That is a question for Mr. Gregory.

I know he is the only one who can wave around these magazines in D.C.

Is he also the only one who gets to ask questions?

Oh goodie, one of Barry’s biggest supporters is going to “interview” him.

OMG I can see it now!

Uh, uh, uh, before we go any further Dave, uh, uh, uh, I know that everyone is waiting for you to ask me what I think of gun control….uh, uh, uh, and my, uh, opinion on you demonstrating that, uh, empty bullet, uh, container, uh, but (reaching into pocket) I want to present you with a Presidential Pardon…..uh, uh, uh, yeah, I know uh, Dave (limp-wristed hand rises up palm-foreward to tell Dave not to speak) that you haven’t even been charged with a crime yet but, uh, uh, uh, you know me, uh, I like to think that I’m always ready to defend anyone who is a, uh, target….heh, heh, heh, so if those gun totin’ guys come after you for, uh, well, uh, just, uh, you know…….(camera zooms in on Dave’s teary eyes)

(sniffing sound here) Ahem, well this is David Gregory and we’ll return to our exclusive interview with President Obama on Meet the Press right after this commercial break. (heard on open mic…where the f**k is a kleenex)

His first question: “Do I really resemble your wife?”

Question: if no charges are brought against David Gregory, can the DC law be challenged based on the fact that is not being applied uniformly?

[…] points? Yeah, I didn’t think so. If Gregory’s smart though he will get a presidential pardon lined […]

I can’t wait to see how the DC police will arrive at the conclusion that David Gregory didn’t know what he was doing and is a good boy so should be let go. Other people wouldn’t be so lucky.
Gregory needs to be prosecuted to the full extent of the law so he knows how it feels. He deserves a jail sentence since he knew full well that it was unlawful to possess a magazine of that size in DC.

[…] points? Yeah, I didn’t think so. If Gregory’s smart though he will get a presidential pardon lined […]