That’s where we are at the end of the day, today, via Jonathan Adler at National Review:

It appears as if NBC’s David Gregory decided to brandish a high capacity magazine on NBC’s “Meet the Press” even though NBC was informed it would be illegal to possess such a magazine within the District of Columbia, where MTP is filmed. The D.C. police are now investigating. Howard Kurtz dismisses the legal concerns. Gregory may have violated the law, but he was just engaged in a media stunt. ”I don’t think Gregory was planning to commit any crimes,” Kurtz writes — no crimes other than violating D.C.’s gun laws that is. But who cares if it was illegal, it was good TV! Tell that to James O’Keefe who, Kurtz may recall, was prosecuted for his own legal indiscretions when trying to film some stunts of his own. Prosecutors wisely allowed O’Keefe to plea to a minor charge, but he wasn’t let off the hook just because he was attempting act of journalism. Why should David Gregory and his NBC colleagues be held to a different standard?

Culturally, one of the things lots of Americans detest about the elite journalistic culture is the idea that reporters are above the law. Usually, this self-regard manifests itself in debates over revealing sources. Many journalists honestly believe they have special rights and privileges not enjoyed by all Americans. As a matter of law and logic, that’s not the case (which is why some journalists want to see the licensing of journalists). We all have the right to commit journalism.

This priestly caste attitude manifests itself in other ways as well. Hidden cameras were something to be celebrated when 60 Minutes pioneered them. When grubby bloggers do the same thing, it’s apparently repugnant.

And here we have David Gregory breaking exactly the sorts of gun laws he’s advocating…. 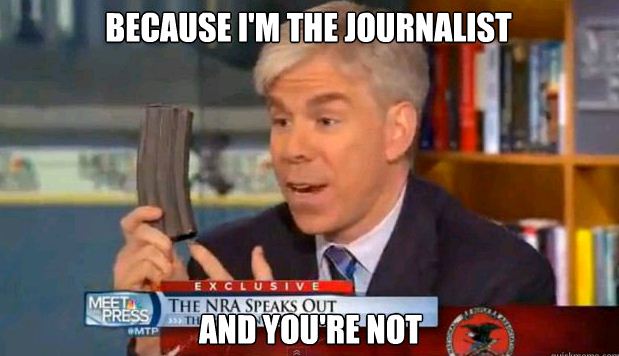 It is hard to recall a moment in recent history in which the gap between members of the media and the public they claim to serve has been so wide as the “national conversation” about stricter gun laws which has followed the tragic shooting death of 26 children and teachers in Newtown, Connecticut. But if the media is slightly – just slightly — out of step with the public regarding their unashamed support for new gun laws, their response to the NBC anchor David Gregory’s recent trials with the law after he brandished a high capacity magazine on television verges on blatant hypocrisy….

While many in the nation’s establishment news media display naked contempt for lawmakers who may differ with them on the necessity of more gun laws, the loathing with which they regard the National Rifle Association is unparalleled….

L’affaire de Gregory has exposed an unseemly sense of entitlement in the elite media. If the post-Newtown debate over gun control has shown that the media is somewhat out of touch with average Americans, the Gregory episode has revealed that they do not see themselves as average Americans.

On his Twitter feed, Goldberg linked to a 2005 essay he did which I recommend for anything interested in further detail:
https://twitter.com/JonahNRO/status/284403387674525697

That is, “anyone” interested in further detail. Scott Brown messed up on a tweet this a.m., so I’m in good company!

This is what drives me absolutely bonkers.

We have privileged, spoiled brats who’ve lived their whole lives in school … straight through university to Journalism School (now there is a not so very exact science), who have dealt with little more than textbooks and symbols on computer screens their entire lives, yet think they have the world completely figured out, regardless of an almost complete lack of any real-world experience.

But because they spent a couple years in J-school, writing some papers, we’re supposed to believe they’ve gained some superhuman skill in uncovering, knowing, and presenting the truth?

I’m supposed to believe that I’d gain more from reading Ezra Klein, instead of Professor Jacobson, because Mr. Klein spent a couple years in J-school? I mean, maybe Ezra could give me a better definition of column inches than Professor J., but, really, what’s important is wisdom, experience, knowledge, and the ability to write well.

My own quickmeme is here: the Ministry of Truth Has Different Rules.

“Because I’m part of democrat/union/media propaganda machine, and you’re not.”

Take a look at this article. Bill, you were not just mentioned, but quoted and acknowledged with high praise:

We need to quit thinking of these people as journalists or reporters and identify them as what they are. They are leftist propaganda spreaders.

Hallelujah — someone said it.

The media chooses which Constitutional Amendments and parts thereof they will tolerate.
Amendment 1 – Freedom of Religion, Press, Expression.

They ignore or vilify this part: Congress shall make no law respecting an establishment of religion, or prohibiting the free exercise thereof. OOPS! ‘ceptin, islam. (see Theo van Gogh)

This part is OK: abridging the freedom of speech, or the right of the people peaceably to assemble, and to petition the Government for a redress of grievances. (see the Occupy movement). Any and all others, NAH!

Ahh yes, what THEY live by: or of the press. (see david gregory)

I do believe that at one time, our nation had Amendment 18 – Liquor Abolished. (see present day ban guns) and since 18 worked so well..

There are several issues that have created our current cultural situation (culture of violence, break-down of family, lack of personal responsibility, and yes, guns) and there will need to be several approaches needed address them individually. It’s when both sides take up extreme positions and dig their heels in that we make no progress.

I am a legal gun owner who submitted to background checks, completed the appropriate training, and take gun ownership seriously. As law-abiding citizens we are expected to navigate the labyrinth of conflicting state laws regarding firearms and we do successfully everyday. Although many of these laws are conflicting between neighboring states, we still respect them and abide by them everyday. Let’s make it easy for everyone (including David Gregory) and develop a basic framework across the United States.

With 300 million firearms in private hands (one-third of them pistols), the overwhelming majority of gun owners ARE responsible, law-abiding citizens, which is why these horrific massacres are not commonplace, but rather horrific outliers that can never be legislated away (e.g. DC, Chicago, and “Gun Free Zones”).

For several examples for the recent use of firearms for defensive purposes not typically reported by the national media please visit: http://www.equalforce.net please forward this address to others to whom this information may be useful. @forceequalizer

I’m really growing weary of the “amazing Journalist” meme. How is it that these people have managed to convince the public that they have some special intellectual and moral gift that infuses them with the ability to tell the rest of us how to think and behave?

In my many years in University, both as a student and researcher, I have consistently observed that Journalism majors stand(more often than not) on the lowest level of the intellectual food-chain. Then miraculously, if they graduate and manage to get a job in the media, they are suddenly transformed into authoritative sources of how society should be governed.

Seriously, does this make any sense?

[…] David Gregory is a courtier to the king beyond these petty rules and laws that an O’Keefe, Jacobson or DaTechGuy must […]

Now that’s a kneeslapper… fact is seems fitting for a Member of the Drive By Media. Doesn’t much matter whether they’re unarmed with facts, or go off half-cocked, seems once they’re behind the mic, or in studio, they cloak themselves in the 1st Amendment. I reckon he didn’t have the stuff to bring in his personal AR-15