Posted by William A. Jacobson Wednesday, January 9, 2013 at 08:30am 17 Comments
More Sharing Options

The David Gregory investigation has been completed by police, and has been handed over to prosecutors, via WaPo:

The decision on whether anyone should be prosecuted after “Meet the Press” host David Gregory appeared to hold a high-capacity ammunition magazine on national television now belongs to the District’s Office of the Attorney General, authorities said Tuesday.

In an e-mail, a spokeswoman for D.C. Police Chief Cathy L. Lanier said her department has “completed the investigation into this matter, and the case has been presented to the OAG for a determination of the prosecutorial merit of the case.” ….

The question of how to proceed now rests with the office of Attorney General Irvin B. Nathan, which oversees prosecutions of some low-level offenses. A spokesman for Nathan said the office would not comment until a decision was made.

Many gun rights advocates pressed police to immediately arrest Gregory after he wielded the prop during a Dec. 23 interview with National Rifle Association chief executive Wayne LaPierre about the massacre in Newtown, Conn.

Those advocates argued that not charging Gregory would show D.C. police to be hypocritical in enforcing gun laws its chief believes are necessary to curtailing violence.

I wonder if Gregory’s attorneys are arguing the famous legal principle: 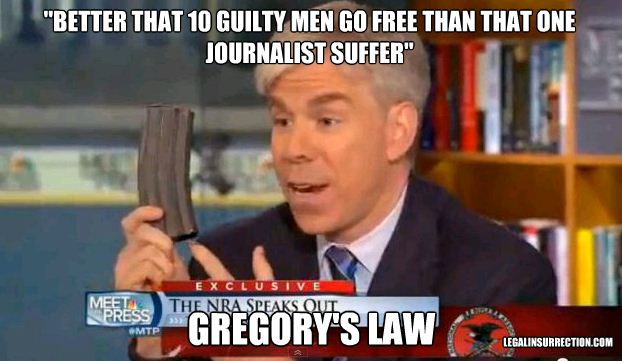 (created by Legal Insurrection via Quickmeme)

“Sonofabitch! Do you know who I am? I’m Moe Greene! [*] I made my bones when you were going out with cheerleaders!”

* Translation to leftist-ese: “Do as I say not as I do. You’re my subject, not my equal. Got it?” Practiced par excellence by Ted Kennedy, Barack Obama, Clinton (Bill, Hillary), Schumer, Reid, and every other liberal hypocrite including card-carrying “journalists” (sois-distant).

If Gregory is not prosecuted, 100 individuals holding the same magazine clips should wave them outside NBC studios in DC. Let the cameras roll. This could get interesting.

If Gregory is not prosecuted, 100 individuals holding the same magazine clips should wave them outside NBC studios in DC.

And they will immediately be arrested and prosecuted to the fullest extent of the law. The media will claim that gun rights advocates threatened NBC employees. As tempting as it may be, such a demonstration is about as effective as trying to stop a runaway train by tossing yourself in front of it.

A better idea might be this: let a civil rights group such as the NRA make a TV advertisement showing David Gregory breaking DC gun laws and asking why he was not prosecuted. Without mentioning NBC compare Gregory’s favorable treatment with Lt. Kim, whom Professor Jacobson has already reported about. Then sue NBC if they refuse to run it. While such a lawsuit will probably fail, the negative publicity would be long-lasting rather than a one-day event the media could spin to their advantage.

Make fake ones out of wood or modeling clay, and see how tight their undies get twisted.

So, if nothing comes of this, essentially the AG will be sending the message “no harm, no foul.” Great precedent next time you’re caught for speeding.

The AG won’t prosecute all sorts of crimes. What makes us think he’ll prosecute this one?

In fact, if he doesn’t back off, NBC could always threaten to resurrect the F&F scandal and possibly do some real investigative reporting for a change.

Again, we’re now living in the Chicago States of America.

Probably as good as time as any to make this point:

As a practical matter, does Gregory have the “right” to hold up an empty clip as part of a civil discussion?

Does he have the legal right?

Everyone is focused on the “right” to bear arms, but these laws are designed to take away another “right”.

These “gun control” laws are designed to turn law abiding citizens into felons.

What “right” does a convicted felon lose?

Now you can see why these gun laws, and all future gun laws, will be selectively enforced.

“When newspapermen start thinking they’re better than the average fellow, the same guy they write for, this business is finished.” — H.L. Mencken

Once again, the Bad Boy of Baltimore proves to be a prophet.

We may be jumping the gun here (HEH!). But let’s make an assumption that Gregory will not be vigorously prosecuted…

It’s hard to express how dangerous this kind of selective enforcement is to the rule of law. People learn it cannot be “justice” in any but the most bitterly ironic sense, and that breeds contempt for the lawSSSSSS in all of us.

Selective law enforcement?
That is a reality in our current Administration.
We have these laws… but if you are a gold-card club member…
Or if we don’t happen to like the law as it is in conflict with our agenda…

The next photo I want to see of David Gregory would be a mug shot. I would place that photo on a coffee mug and then sell the ‘mug’ to gun owners as a reminder to not flash your high-capacity ammo magazines in public.

If nothing else David Gregory could be the national poster boy for what not to do. The DC AG should keep this apt teaching lesson in mind while they deliberate between doing what is just and fair or doing what AG Holder’s justice dept. wants them to do.

I hear NBC is considering a new reality show starring David Gregory, titled “What I Can Do”; wherein each week Gregory flaunts a local ordinance, state or federal law…using his new catchphrase “Why? Because I can”.

Could it be that the First Amendment trumps the second???

“… low-level offenses …” If that was me, I’d still be in the slammer. Where is the justice?
We should organize a million man march in DC with each participant holding a 30 round magazine, some operable and some not. Let the police figure out who should be prosecuted and who shouldn’t after a month long investigation.

According to Harry Teid – you don’t have to reallybeagelon to be a felon.

So just ref to him as Mr Gregory the felon.

[…] David Gregory’s Law The David Gregory investigation has been completed by police, and has been handed over to prosecutors […]