“The letter zeroed in on concerns that it took the White House two months to announce the discovery of documents.” 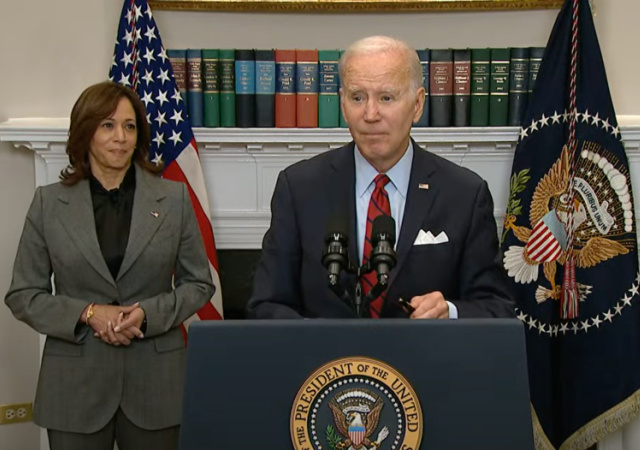 As still more classified documents are being unearthed among Joe “I am the Democratic Party” Biden’s personal possessions, the newly-elected Republican House is launching at least two investigations into the growing scandal. One is spear-headed by the House Judiciary committee, the other by the House Oversight committee.

House Republicans announced Friday they have opened an investigation into the classified documents that were found at President Joe Biden’s Delaware home and his former Washington office.

In a letter to Attorney General Merrick Garland, House Judiciary Chairman Jim Jordan requested all documents related to the discovery of the documents and Garland’s appointment of special counsel Richard Hur to handle the case.

“The American people deserve transparency and accountability from our most-senior executive branch law enforcement officials,” Jordan said, requesting the Justice Department to provide the documents no later than Jan. 27.

The Hill has more:

Rep. Jim Jordan (R-Ohio), the chairman of the panel, and Rep. Mike Johnson (R-La.) penned a letter to Attorney General Merrick Garland on Friday announcing the probe and requesting documents. The communication came one day after Garland named a special counsel to look into the potential mishandling of classified materials.

“We are conducting oversight of the Justice Department’s actions with respect to former Vice President Biden’s mishandling of classified documents, including the apparently unauthorized possession of classified material at a Washington, D.C. private office and in the garage of his Wilmington, Delaware residence,” the letter reads.

. . . . Jordan and the Judiciary Committee are now launching their own investigation, requesting that Garland produce documents and communications relating to the appointment of Hur as special counsel and Biden’s mishandling of classified materials, among other subjects. They also want documents and communications between the Justice Department, FBI and Executive Office of the President.

The committee requested the materials be sent by Jan. 27.

The letter zeroed in on concerns that it took the White House two months to announce the discovery of documents. Biden’s lawyers alerted the National Archives the day they found the materials in November — days before the midterm elections — and the agency then retrieved the materials the next day. The second batch of documents were found in Wilmington on Dec. 20 in a review that ended on Wednesday night.

Still more documents have been discovered since.

“It is unclear when the Department first came to learn about the existence of these documents, and whether it actively concealed this information from the public on the eve of the 2022 elections,” Jordan and Johnson wrote. “It is also unclear what interactions, if any, the Department had with President Biden or his representatives about his mishandling of classified material.”

The Republicans went on to juxtapose the Justice Department’s handling of the Biden documents with how it dealt with classified materials found at former President Trump’s Mar-a-Lago residence — which involved a search warrant being executed at the Florida location.

It’s not shocking that Biden mishandled classified materials; he’s known to be a completely corrupt, careless, clueless old codger. What is shocking is that the media and the DOJ appear to be pouncing on the developments . . . that have been known about in DC since at least early November (i.e. before the midterms).

This is starting to remind me of the start of the #MeToo movement that claimed the scalp of Democrat senator Al Franken. The goal of that leftist-fueled movement may have started out with good intentions, but it was quickly grasped by Democrats as a possible political weapon against then-President Trump. However, as the movement gained steam, they found themselves on dangerous ground as allegations and photos surfaced of Franken behaving badly. He had to be sacrificed on the altar of #MeToo . . . or they could never “get Trump.”

Democrats suddenly dropped the whole #MeToo thing in order to run Biden in 2020, but that is looking more like a stay than a pardon.

Is Biden about to suffer the same fate as Franken? Another expendable white, heterosexual male sacrificed by Democrats to “get Trump”? Who knows, but I sure wouldn’t be surprised if that’s the play here. At the very least, they can clear the path for a more “inclusive” president in VP Kamala Harris who checks numerous ‘intersectional’ boxes that the radical left obsesses over.

Tucker Carlson sees similar parallels with the Democrats’ destruction of one of the founding members of their branch covidians, now-former New York governor Andrew Cuomo. Watch:

Opening doors of investigation only are fruitful if the contents behind said door are not allowed to escape.

Since Democrats need not even mention the China connection to end Biden’s time in office, you can be assured it will not come up.

Who is going to charge and prosecute a sitting Democrat president named Joe Biden?

If Biden can’t read a written statement and stay on topic without the risk of him speaking off the cuff, imagine what a prosecutor like the lawyer JAG Tom Cruise played in movie would do to Biden on a stand, screaming out, “You can’t handle the truth.”

Biden has to use a tv studio to accommodate the giant teleprompter. It’s embarrassing.

Personally, I don’t see the where any investigation will lead. It may open the door.. but that’s all. I never see the trash removed.

Because that is why Garland was appointed US Attorney General. To cover for the democrats and the Biden regime.

I am heartened at the House’s recent activity. It seems that now they are responding to arising outrages in a matter of mere hours, instead of eons.

I’m cynical enough to think there will be much harrumph-ing and speechifying, and no action.

What do you notice about the photo at the top of page? The books. The books are no doubt a prop but the sick message by Biden’s handlers is they want the public to think both Harris and Biden are smart because “they read all those books!”

Anyone who keeps books on a mantle has either a fake fireplace or fake books.

Two years is in a bit under a week, and it’s thought the dems have been looking to replace Biden for a while. Hiding the problem for two months not only doesn’t hurt the midterms, lets Biden resign over it and transfer to Harris to potentially get two more terms, but also lets the dems grandstand that Biden resigned over his docs because nobody who mishandled docs like that should ever be President, blah blah blah. Three birds with one stone.

My tinfoil hat says: “These days, the only mistake you can make is being insuffficiently cynical.”

But, but, but, I’ve been told that US elections aren’t “rigged.”

Hiding the news til after the election seems rig-y.

While leaking investigations — Hey, we’re going after Juliani! — that come to nothing seems rig-y-er.

Scheduling operations off the political cycle, and alerting CNN to film the raid — um, do any of those fifty-something intelligence experts think this stuff has “all the earmarks” of an influnce op? I mean, they’d know. If anybody has learned from the Russians how to execute an influence op, it would be the people who have studied them so closely that they’re now experts.

Byron York makes that case yesterday .Byron’s column tells us what we need to know.

Biden wants the public to know that he takes classified documents seriously.

We only know that because he’s told us so. As a result, we don’t know what we don’t know. I believe we are being played by the Administration big time and the Special Counsel will not be pressured to file his report any time soon. Hur has a minimum of two years to complete the investigation, which ends with a pass.

Biden is allowed to finish his term. By spring new DNC candidates announce and Biden fades into the sunset..

But we can impeach retired presidents now. New Democrat rules.

This whole “get Biden” is being framed for future historians; it will look like a simple”oopsie!” instead of actually nailing Diaper Man for more the serious felonies of graft, corruption, and treason.

The real reason for this is that there is a world wide shortage of Alzheimers medications ever since Biden took office. Seventy five percent of the world’s supply is being hogged up by one individual who lives in the White House in order for him to read notes off the teleprompter and answer questions like, “Mr President, which flavor of ice cream do you prefer, chocolate or vanilla?”

One wonders why they had to go through the trouble, given that Biden has “woman complaints” every bit as credible as Cuomo’s.

Interesting thing is this shows to the world the hypocrisy of how they handled President Trump who actually HAS the authority to classify and declassify , whereas a VP does not

Of course, this trading of charges about documents in the name of national security is all political theatre. If either party cared at all about keeping legitimately classified documents secure, and enforcing the laws to that effect, Hillary Clinton would be sitting in a federal prison. She run the entire State Department business out of an easily hackable private server in blatant violation of the law, then lied about the content of those documents, and then destroyed over 30,000 emails that were under subpoena. This last act alone would land anyone not a Democrat in prison. So let this cheap side-show continue, so that the politicos can pretend to care about national security, while they simulate devotion to the rule of law. Our worthless media will play their role as the chorus for this farce.

I’m not holding my breath. Remember that these investigations only affect one side. Nothing will be done about it.

A big danger with this one is could it distract from the church committee?

The double standard is obvious to the point where there isn’t that much more to add from an investigation while the overall weaponization of departments….