“The Biden team did not report finding the second batch of classified documents in Delaware on Dec. 20 — six weeks after they found the initial cache in Washington, and after the 2022 midterm elections.” 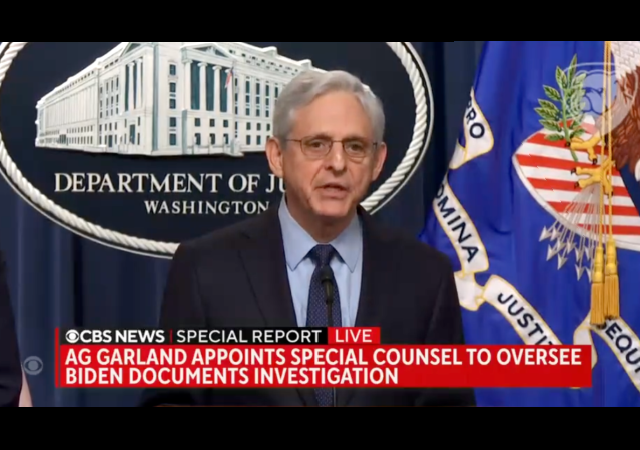 Classified documents have been found at his personal office in DC and the garage at his Wilmington home.

What the: “The Biden team did not report finding the second batch of classified documents in Delaware on Dec. 20 — six weeks after they found the initial cache in Washington, and after the 2022 midterm elections.”

#BREAKING: Attorney General Merrick Garland has named Robert Hur as Special Counsel regarding the investigation of classified documents found at the Penn Biden Center and his Wilmington home. pic.twitter.com/ph0MAohEdk

AG Garland on Special Counsel Hur: "I will insure that Mr. Hur receives all the resources he needs to conduct his work…I strongly believe…this department can handle all investigations…but…the extraordinary circumstances…require the appointment of a special counsel" pic.twitter.com/aejMqXWmEn

Oh, look. Politico is grasping at straws to make Trump having classified documents worse than Biden because of how each one responded:

Still, there are significant differences in the timeline of the Trump-related documents and those found at Biden’s office and home. The National Archives discovered the presence of records with classified markings at Mar-a-Lago in January 2022, after a protracted effort to reclaim presidential records that Trump had warehoused at his estate since leaving office. Trump sent an initial batch of 15 boxes back to the archive that month.

After discovering the material marked classified, NARA forwarded the matter to the Justice Department, which soon subpoenaed Trump’s presidential office for all other documents with classified markings. The department also subpoenaed security footage to review the handling of the documents, which were kept in a storage room and Trump’s personal office.

But DOJ investigators said evidence they collected showed that even after the subpoena, Trump’s team had not turned over everything in their possession — even as the ex-president’s aides presented DOJ with a signed attestation that all subpoenaed documents had been turned over. The FBI discovered another trove of sensitive records after executing a search at Trump’s estate in August, including some that he kept in his personal office.

Biden’s team, by contrast, has repeatedly emphasized their proactive approach to the discovery of the records. In two statements, White House counsel Richard Sauber said Biden’s own team discovered the documents, immediately alerted NARA and the Justice Department and returned the records. Similarly, they conducted additional searches and have pledged to cooperate with DOJ investigators.

Appointed a special counsel in the biden case

At least able to keep appearance of impartiality

He’s been appointed to bury the case so everybody can just say, ‘oh we can’t comment on an ongoing special counsel investigation’. And then nothing will be heard about it ever again until after the 2024 election where they quietly release findings that there was no ‘intent’ by Biden to do it and they were closing the case.

The counsel is so special he can also connected to Steele and the Russia hoax. But I’m sure he fought for truth every step of the way.

According to a Justice Department document, Hur is a former DOJ official “who handled, participated in, or have personal knowledge of the FBI’s relationship and communications with” Christopher Steele, who authored the infamous dossier that paved the way for the Russia hoax.

“I trust this one to bury the case”

Not until after they declare Biden did nothing wrong….

Get Biden safely past the 21st and they can install Harris for ten years.

Or declare that while he did “technically” break the law, since he didn’t mean any harm by it, he won’t be prosecuted.

How about … since the paper was worth less than $900, Brandon should be treated as are those pursuing the Dems new shoplifting profession.

Any E-3 who tried that excuse would find himself in Leavenworth.

Someone should have asked if this guy would be as biased as the one they hired to look at Trump.

Hur’s background? He was a top aide to Deputy AG Rod Rosenstein and was special assistant and counsel to now FBI Director Chris Wray when he was an Assistant AG at the DOJ.

Thank you for this information which I was wondering about, unfortunate as it is, but not unexpected,
I guess we can always pray for a “Damascus moment” and someone interested in the truth even when it hurts a Dem.

I was going to post that. Nothing to see here, just another in the bag swamp creature.

Nothing will happen of course

Nothing ever happens. democrats can violate the law with impunity. They know they will be protected.

Keeps it out of the media now.

Biden said he didn’t need a guard for his classified documents becuase his garage door had a lock.

I was reliably informed that illegally squirreling away classified documents at ones private residence will require a dawn raid of 147 armed FIB agents invading that home in order to rummage through the missus panty drawer until the last vestige of dignity is destroyed.

I want my pound of flesh, Murrick.

Nobody wants to look at fake Dr Jill’s panties.

So, the one guy immediately turns in stuff he found in the recipe drawer, he didn’t know he had, not reported til months later, after the election that info might have influenced.

The other guy is loud and up front about stuff in mid-dispute that everybody knows is there, kept in secure, guarded locations with security added when somebody requests it.

Is this an opening gambit to get Biden to step aside? It sure looks like things are accelerating concerning Biden’s wrongdoings.

Possibly. Since there is no way Biden will voluntarily step down; innate, angry obstinance transitions perfectly between doped peaks and valleys periods.

– Better to make it known now than six months before the election.

The high level advance prior planning to replace Biden with Harris failed to take into consideration that Dr. Jill and VP Kamala don’t see eye to eye. There is no way in hell Jill is going to step aside for Willie Brown’s leftovers so Kamala Harris can be crowned Kween.

and like the Durham special counsel, nothing will become of it but it does make it very, very difficult to prosecute Trump who had Secret Service guarding the place.

I don’t see how it makes it difficult to prosecute Trump in any way whatsoever. It is legally irrelevant to the Trump case, and DC jury will be 100% certain of convicting Trump. Biden is in charge, and has the power to pardon himself and his son. The special prosecutor report will merely tell him whether such a pardon is necessary.

Can Biden pardon himself for offenses committed before becoming President?

Bet this squashes all reports on Sundowner’s document theft

This has got to be the easiest job in government. He can start writing his report now and have months of quiet time to catch up on Netflix, do some reading, and organize a few do-nothing meetings before releasing the report on a Friday afternoon. “After a long investigation, we found no intentional release of classified material etc…”

Proactive seems like a reach. The first batch found prior to the Nov midterms, another trove on Dec 20 in Biden’s garage. With the DoJ not immediately notified about the second trove of docs and a very long delay in anyone searching for additional docs in other locations, that’s not very proactive. Nice try on the spin, too bad Musk bought Twitter and facts are not so easily suppressed anymore.

1) Everyone connected to this will now refuse to address it due to the “ongoing investigation”.

2) Expect the quickest resolution of this type of investigation in history, completely exonerating the Idiot in Chief, followed by Trump’s indictment.

Not quickest. The investigation will continue for a few months at least, until the media dies down. Every document found between now and then will silently vanish into the “cannot comment” file, and in the end, the report will be released on a Friday afternoon, the documents will go back into the classification system so they can’t be subpoenaed, and quite possibly the main investigator will retire so they don’t have to answer any questions about how little work they did.

In many respects the special counsel is a way to punt the problem down the road, a way for Garland to avoid being pressed on the matter for an extended period of time.

Biden said, “On hindsight, I should’ve put the documents in the trunk of my Corvette. They would’ve been more secure there.”

Biden will pardon himself and his son, and order Garland to prosecute Trump before a DC jury to ensure conviction – and boast about it on TV. He is after all, a Democrat, and they have no shame.

The way I read the Constitution, a Presidential self-pardon is valid unless he is removed from office by impeachment and a 2/3 Senate vote.

Thank you. I read that this morning and let’s not forget that the VP can not take Classified Docs anywhere, Bidens Penn Center got $54 Million from Chinese sources, Biden was paid $500,000 for his last year as a “visiting professor” at Penn although he showed up 8 times and didn’t teach a class, Hunter had full access to the Classified Docs at the same time he was getting paid off by China and Ukraine, Biden went on TV and attacked Trump for having Classified Docs in a locked private residence guarded by Secret Service.

Notice that Biden sent his attorneys to look for the documents? So what do they know, and why were they sent? Attorney client privilege anyone!! Very slick.

I’ve been wondering about post-discovery handling of the documents. Seems to me the proper course would have been to call in the FBI to secure them in place and provide secure transport to a SCIF, not have some uncleared lawyers carrying them around – after which the FBI would have been the proper agency to carry out further searches for additional documents – sort of like they did with Trump.

Pretty sure Joe is being taken out by some fashion of the deep state.. who and why?

It would be a factor in his being elected, but once elected, he would continue under robotic control by his handlers.

That has already been done by the Deep State Security folks. That is why this is just a bland shot across the bow for Biden to stop his silly talk of running in 2024. If he persists then there will be more coming out

Yesterday afternoon, while Biden was giving an interview in which he admitted that he knew about those secret documents in his locked garage, other Democrats were out front declaring that those same documents were planted, probably by Trump.

Politico: But DOJ investigators said evidence they collected showed that even after the subpoena, Trump’s team had not turned over everything in their possession — even as the ex-president’s aides presented DOJ with a signed attestation that all subpoenaed documents had been turned over.

Oh, that needs Fisking. The signed attestation was that all the documents *that they knew of* that had been requested *and were not disputed* had been turned over. Also, NA doesn’t have enforceable subpoena power over personal Presidential documents, so this had to be an FBI subpoena to retrieve classified documents. Since Trump claims to have declassified the entire contents of MAL, the FBI would have to prove a negative, i.e. prove he did *not* declassify what they were looking for, which I don’t see anywhere in the docs.