NBC’s Dasha Burns on Fetterman’s Debate: ‘It was Very Similar to the Conversation That We Had’

NBC’s Dasha Burns on Fetterman’s Debate: ‘It was Very Similar to the Conversation That We Had’

“And of course, we posted the entire interview online as well after we conducted that so folks can go back and look. He is clearly still struggling with some of those issues.” 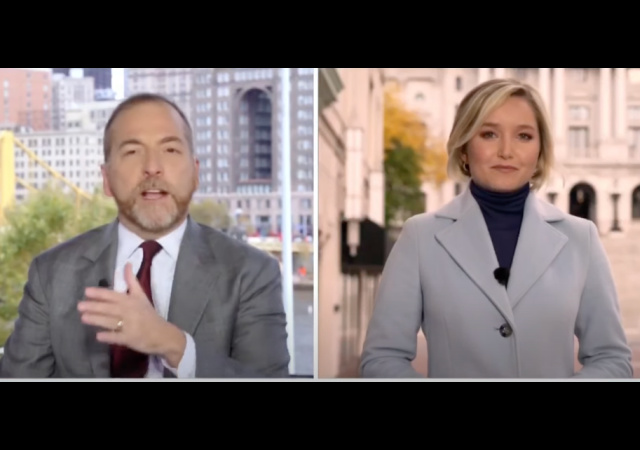 NBC stuck by Burns. Meet the Press‘s Chuck Todd applauded Burns. I give them credit.

Burns has also not backed down. Todd had her on Meet the Press on Wednesday, where she confirmed Fetterman’s disastrous debate performance did not surprise her:

“We, of course, had been in a room with him before. We had used that closed captioning system, and so, for us watching the debate, there were no big surprises. It was very similar to the conversation that we had. And of course, we posted the entire interview online as well after we conducted that so folks can go back and look. He is clearly still struggling with some of those issues. The campaign, beforehand…did play down some of the expectations, saying, look, this isn’t his format, the closed captioning may play a role in how long it takes him to get those answers out. … But Chuck, it was interesting, the contrast from the campaign the night before the debate versus the night of the debate, right after, in that spin room. The campaign came in, a spokesperson saying that they were thrilled with Fetterman’s performance, saying that he won in countless exchanges with Oz. They were very enthusiastic about how Fetterman did, especially comparing it to his performance in the primary. But stepping back and looking at some of the reactions and the aftermath today, I don’t know that that’s how much of the audience read it, especially those that were sort of seeing him for the first time in this context.”

Fetterman bombed the debate. The man needs to devote 100% of his time to recovery from his stroke in May. Drop out, recover, and run later. This isn’t hard. But the Democrat Party put politics above health. Look at Biden.

Fetterman blamed the captioning system for his performance. Nexstar immediately fired back, telling people he did not take advantage of the rehearsals offered to him.

“In fact, Nexstar’s production team went to extraordinary lengths to ensure the effectiveness of the closed captioning process, and to accommodate several last-minute requests of the Fetterman campaign,” said the press statement.

Never misunderestimate democrat ability to steal an election they really want. The dirty deed gets done with ballot-stuffing in inner city precincts.

A nicely subtle “I told you so.”

If Fetterman wins they will begin to purposely seek out cogitatively disabled people to run. They prefer it since that allows the behind the scenes people to be sure that there is no going off script. No balking at making votes or statements they don’t agree with. Plus you won’t be allowed to debate them or criticize them for being impaired you bigot.

Ha ha. Democrats do not have to seek out cogitatively disabled people. They’re everywhere!

That the election might be close and that Fetterman even has a chance tells you all you need to know about the Pennsylvania electorate. And about the leftwing legacy media running an all out propaganda campaign supporting him.

They’ll support and vote for a freakish brain damaged radical socialist Dem candidate over a GOP candidate who is politically closer to Mitt Romney than to Trump.

‘Lurch’ Fetterman is a placeholder. With a little vote ‘fortification’, something Pennsylvania is well known for, Fetterman might actually win. Then the real Senator will be his wife. Until The Party finds and installs a suitable replacement.

Oh, they’re not just relying on the stupidity of the average voter. They’re once again ginning up the fraud machine.

Similar malfeasance occurred in the 2020 election, aka the bestest, fairest, most transparent election in recorded human history.

Burns wasn’t really as forthcoming on his cognitive/communications issues as she luckily should have been. This was so much worse than she described.

Then the real Senator will be his wife.

The democrat leadership is absolutely salivating over the idea of having an illegal in the Senate.

Not just an illegal, but an illegal who has absolutely zero understanding or appreciation for our system of governance. She’s a wanna-be tyrant.

Regardless of the extent of his cognitive deficits from his stroke, and impact on his ability to serve effectively as a U.S. Senator, Fetterman disqualified himself from elective office by delusionally and narcissistically refusing to own up to, admit to, and accept responsibility for, the situation, and its consequences. Like so many Democrats nowadays, including Senile Joe Biden, Fetterman completely fails at reality-testing, an essential skill for any political leader.

“The man needs to devote 100% of his time to recovery from his stroke in May. Drop out, recover, and run later.”
“Never” would be fine too.

In days gone by these would be “Yellow Dog” Democrat voters ,but now “Biden-Harris-Fetterman” Dems…. Quite a decline . Everyday the Dems push deeper into Soviet Poliburo/Central Committee territory. The Hidden Junta runs the country.

No one with any capacity for independent thought believes Fetterman can adequately serve the people of PA in the Senate. The hacks will push him anyway and those who vote for the team agenda v the candidate will support him.

Since dead people are such an important voting bloc for democrats, we shouldn’t be too surprised when their weekend at Bernie’s candidates have a lot of support.

There is no way in hell a creditable physician with any competence would O.K. a patient to tackle any activity such as this within weeks of a major stroke. Even having been administered the drug alteplase/ marketed as Activase® (Genentech) to dissolve the blood clot at the time of stroke it did not prevent at best even minimal damage. The brain has millions of receptors and senders and with rest, the right type of rehabilitation and diet it can be up to 18 months post stroke before the final analysis can be determined what will never come back pre-stroke.

My husband had a left sided stroke at age 54 and suffered the lost of the many parts of what creates speech and comprehension referred to as dysphasia. It was into the 2nd year post stroke it was determined the peak level of return of what could be achieved back. Though he got back a lot, he never was able to go back to being able to tell a good joke as he was known to do.. The best part, he was still able to enjoy everyone else who could. The down side is the damage suffered was also a contributing factor to a slow slide down the mountain he had climbed as he aged losing what he had the benefit of salvaging for 17 years.

What his enabling wife, not unlike Jill Biden. are doing I consider Spousal Abuse.

Why? He wasn’t harmed by it. He didn’t fall down and hurt himself or anything like that. He may hurt us, but that’s not his doctor’s problem.

You can see he really wants to do this and wants to win. He called his opponent a liar repeatedly for no reason at all, that shows his desire and competitiveness. He’s obviously a committed socialist.

His doctor won’t help us avoid a bad senator. We have to get visibility into the cheating and turn out our vote to do that.

These people are complete pieces of sh*t, absolutely corrupt, and they truly are a threat to our republic.

It is clear Fetterman should have dropped out immediately after his stroke and the Democrat Party would have had time to get someone to replace him. He is clearly in no condition to be a Senator, which requires a person to be able to handle debates on the floor and to listen to and make questions of various groups/people. It sounds like the Dems want Puppet Masters running him like they do with Brain Dead Biden. If he is elected it will be a disaster for the people of PA and of the nation.

All they care about is electing a Dem to warm the seat, Schumer will be happy to tell him how to vote. They judged that even with the disability he was their best bet. He’s a sort of political prodigy, you can’t buy that size that he has, and he’s skanky enough to go along with the Dem agenda.

Their other choices like Mx. Rachel Levine don’t do so well in public.

But I bet even they didn’t expect him to start with “hello and goodnight”. He clearly has several screws loose upstairs.