“This is painful to watch regardless of one’s politics.” 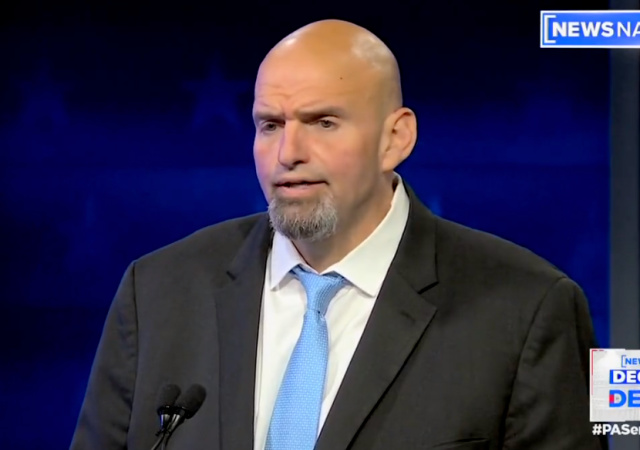 This is painful to watch regardless of one’s politics.

There is no amount of empathy for and understanding about Fetterman’s health and recovery that changes the fact that this is absolutely painful to watch.

That #PASenateDebate was painful to watch. I feel very sorry for John Fetterman that he suffered a stroke, but it is cruel of his team to expose him to such ridicule when he is clearly unfit to either take part in TV debates or be a fully-functional senator. He should withdraw.

John Fetterman’s ability to communicate is seriously impaired. Pennsylvania voters will be talking about this obvious fact even if many in the media will not.

I'm catching up on the debate, and it looks like lots of folks owe an apology to @DashaBurns. She reported on very real problems. It's not ableist to wonder if Fetterman is up to the job, and it's very reasonable for PA voters to take that question into account.

CHRIS CUOMO on tonight's #PASen debate: "Voters, I think, saw things that will definitely change the state of this race."

"Fetterman struggled … I don't think his preparation was great." pic.twitter.com/Hy58N3OD41

Former Biden official: "Anyone who's coming into this totally undecided…it's hard to see them coming away terribly, terribly convinced by Fetterman" pic.twitter.com/VwkgeMwFCV

Democrats are asking the same thing post-debate: Why did Fetterman's team allow him to take the stage tonight? No one I'm talking to on the left has a good thing to say about what just took place.

Fetterman melted down when the moderator confronted him about his 2018 comments. I mean, even CNN called him out over his fracking hypocrisy.

Fetterman just melts down after a long pause when confronted about his flip flopping on fracking. pic.twitter.com/ceGtuNt61J

Fetterman repeatedly said he opposed fracking and even signed a pledge to BAN it.

In 2016, John Fetterman signed a pledge to BAN fracking. pic.twitter.com/Wr4bsLwRp1

This poor debate showing should ideally be the nail in the coffin of sociopath, ne’er-do-well, parasitic, criminal-coddling Fetterman’s campaign. At least, one can only hope. Never underestimate the gullibility of Dumb-o-crats. I’ll be seriously disappointed after election day if Fetterman, Warnock and Katie Hobbs haven’t lost their respective races.

All they see are puppets, controlled by the DNC, Soros and likely, Obama.

The diehard Dems don’t even give a hoot about his handicaps – they’ll just vote D no matter what. They are beyond reason.

Fetterman belongs in the Senate if you consider it a group home.

Or, a mental institution.

He needs to be on life support.

And that, folks, is why early voting must be made illegal.

Or at least insist that all debates occur before the first ballot is cast.

Yeah, I’m for banning early voting, and, banning mail-in ballots for all Americans except military personnel stationed overseas, and, Americans living abroad. These mechanisms simply leave too much room for Dumb-o-crats’ shenanigans and mischief to manifest themselves. Everyone should vote in-person, on a single day, election day. No more nonsense.

Does this mean we have to quit making jokes about Democrats being brain damaged?

No, it means we get to yell out, “that’s not funny!” OURSELVES, right after telling the joke.

Fetterman tried to pull a Brandon by blatantly lying about his record on fracking. Strange that CNN opened that door.

And now the price of gasoline is going up because the STRATEGIC MIDTERM RESERVE is running low.

I thought he was going to lay down and start fracking right there.

Mary, you deserve hazard duty pay for this effort.

The truly insane part of this comes from MSNBC who, according to their “insightful” analysis thought Fetterman did a stellar job in showing Oz to be shallow, transparent, and on the wrong side of every argument (https://www.msnbc.com/opinion/msnbc-opinion/pennsylvania-oz-fetterman-debate-s-real-takeaway-n1300238). My word! For them to act as though Fetterman is a great candidate after this horrific performance tells you all you need to know about the MSM and their honesty. And they wonder why no one believes their garbage.

I guess we found the 18% that thought Fetterman won

That’s because Fetterman is a Gibberarian from Gibberia as are many at MSNBC. They speak Gibberish too. We don’t.

I really wish I could comment on that page. I would register on the site just to do so. What they wrote is pure garbage. The quotes they give for Fetterman in the article aren’t even close to accurate to what was actually said.

Not sure why anyone is surprised by Fetterman’s performance. After all, he didn’t do any worse than Joe does when allowed to speak in public. Fetterman & Biden represent what the modern democrat party has become. And it’s not a good thing.

No one on the (D) side cares if this Fetterthing is operating at 20% or 50% human capacity. If he can function enough to vote in the Senate, he’ll vote accordingly. If the creature explodes out of his neck and they need to replace him, they’ll vote for a (D) governor who will appoint some other twit who will vote accordingly. If the results are too close in these elections, the (D)s will pull whatever strings to get (D)s in office.

After the past few years, I am so beyond cynical when it comes to elections and power.

Agreed. He’s just a body to fill the spot until they can fill it with someone who has (maybe) the I.Q. level above that of a turnip. Shortly after he’s put in place he will resign for health reasons.

It is apparent to me that a huge plank on the D platform is that every silk purse comes from a sow’s ear. I don’t feel sorry for Fetterman. Not for a second. That and this new thing.. ableism. Why not? Actual qualifications, mental and physical should be irrelevant. Catatonic? No problem.

As Colonel Travis pointed out.. it is easy to be beyond cynical.

Why not? Look who they “elected” POTUS.

If there is not a winner declared in PA within six hours of the polls closing then the turnip will win. Mail-in ballots will make up the difference just as they did in 2020 because pre-printed ballots don’t watch debates.

Dems and his team knew he was not equipped to be a Senator which is why they hid him, trying the Brandon strategy. Brandon let on what the plan was a few days ago. Hide Fetterwoman, get him elected then declare him unable to be Senator which allows him to resign and the Gov appoints his wife to the seat.

I saw the announcement on CNN yesterday afternoon and I thought, “This going to look like Oz curb stomping a child.”

And I was right.

Any PA voter voting for him after this is a fool. While I have sympathy for his condition, he should not be anywhere NEAR a Senate seat in Congress.

I have sympathy for him. However, his wife and political team need to be in prison for spousal/disabled abuse.

As should the Biden family and the entire Biden administration

Fetterman’s campaign is trying to blame the closed captioning company now. It can’t possibly be that phony, commie lay-about has cognitive issues.

The fact that the dems are still trying to prop him up after this is just pathetic.

Lumperman is not a bad person. problem is he has a Fetterman attached to him at the lump to neck interface.

The bad news is his debate performance was horrible.

The good news is he can go home and take off the ill fitting suit and put on a comfortable hoodie.

Yeah, his little buddy gets uncomfortable under that suitcoat.

making the lump happy is what matters 🙂

I used to think that if any guy put on a suit, his appearance always improved. Not any more.

I’m just surprised they actually held a debate. I thought Fetterman would find a way to avoid it.

Anyone can change his mind about an issue. But you shouldn’t lie about the fact that you once had an opinion other than the one you have now. That’s a stupid thing to do.

At last the sun is shining
The clouds of blue roll by
With flames from the dragon of darkness
The sunlight blinds his eyes!