“In fact, Nexstar’s production team went to extraordinary lengths to ensure the effectiveness of the closed captioning process, and to accommodate several last-minute requests of the Fetterman campaign.” 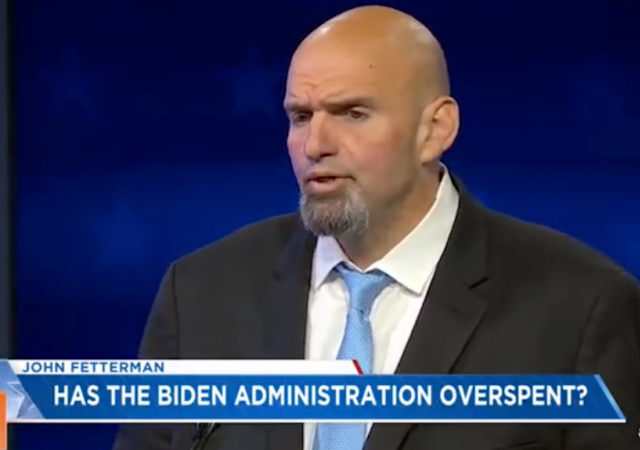 Pennsylvania Democratic Senate candidate John Fetterman needs to devote 100% of his time to recovery from his stroke.

Fetterman’s Tuesday debate performance was awful and painful to watch. He needs a captioning system in order to understand questions.

Instead of admitting defeat, Fetterman blamed the captioning system.

If it's riddled with errors and that's the actual problem, what makes anyone think it will work any better when he's a US Senator. They didn't think this one through. pic.twitter.com/Fysl9T3oPy

Nexstar reminded Fetterman that he didn’t take advantage of the rehearsals offered to him with the captioning system.

“In fact, Nexstar’s production team went to extraordinary lengths to ensure the effectiveness of the closed captioning process, and to accommodate several last-minute requests of the Fetterman campaign.”

Statement from our parent company, @NXSTMediaGroup, in response to the @JohnFetterman campaign claiming he was “working off of delayed captions filled with errors” during last night’s Pennsylvania Senate debate on @NewsNation pic.twitter.com/PUT5ELfQ0C

A brain dead zombie is in no condition to complain. He should just wave his arms in the air, let out a moan and go eat somebody.

Dems think they can shift blame without backlash. They’ve been doing it so long to Career Republicans that they’ve become accustomed to weaklings that roll over and beg.

Nothing, NOTHING is ever a Marxist’s fault. Not even Marx’s own bastard baby.
Miller hit the nail on the head — is Fetterman going to blame the caption system when he votes for WWIII?

In any case, Stephen Miller is right, the system is as good as it’s going to get, and the one in the senate won’t be any better. So if he can’t perform with it, then he won’t perform in the senate either.

Yeah Fetterman whining about equipment issues is tone deaf. His campaign has been running around telling everyone he’s perfectly capable of performing as a Senator but now he’s crying about equipment that he didn’t use every opportunity to test?

That speaks to his failure to adequately prepare. Unsurprising for a guy who reportedly chose to be absent from his previous political jobs. This reeks of entitlement and his expectations that the rest of the world should make allowances for him v him being disciplined enough or dedicated enough to take every opportunity to test it. Instead he blamed others when he failed to demonstrate sufficient motivation and drive to succeed by adequate preparation.

Every so often I place an Easter Egg just to see if anyone notices.

I wrap mine in a silver lining.

He also blames his stroke: “I had a stroke and Oz won’t let me forget it.”

Translation: “I keep forgetting I had a stroke and that sonnofabitch Oz keeps reminding me. My neck hurts and this damn suit is so uncomfortable. I need my hoodie.”

He blamed the captioning system FOR his performance, as the headline says. That was brutal to watch. Fetterman’s wife is using him him for her 15 minutes. Even a clueless Dem deserves better than that witch.

The headline was corrected after GWB and I pointed out the error.

The hoodie should look good hanging in the Senate cloakroom.

You mean “for his performance”, right?

So basically Fetterman admits he can not do anything without a puppeteer. Understood.

To the Dems, like Biden, that’s his only virtue.

Didn’t even practice with the system? Imagine going horse-racing without even getting on the horse before it starts.

One practice is all a real man ever needs. Just ask Alec Baldwin.

He blames the captions. It’s not his fault that he’s brain dead.

Or to borrow Grissom’s famous quote from the mercury program:

In Grissom’s case (trained professional test pilot), he most probably was right. They were cutting the antenna off the capsule with the static-charged helicopter directly overhead. In this case, you have an obvious screw-up looking for a scapegoat.

So it was the technology, not the cognitive deficits? Who does this guy think he is, POTUS?

“If I had Oz’s brain and he had mine, then he would’ve had to use captions and I would’ve beat him, I think. Pretty sure. Goodnight.”

Obviously the DNC hacked into the captioning system and substituted bizarre alternative dialogue the only answer to which was apparently halting, incoherent utterances. Fetterman has hired Sidney Powell to bring the Kraken down on Nexstar. Meanwhile, half a world away, in the former Rhodesia, two white farmers were murdered on their farm while the debate was being broadcast. Quite a coincidence! The tentacles of this conspiratorial octopus extend everywhere.

Fetterman is a grievously flawed plus handicapped person. But that won’t matter to diehard Dems who’’d vote for a corpse if they had to in order to deny a Republican surge. They can never, ever be dissuaded.

“Dem’s who’d vote for a corpse”

Ruth Bader Ginsburg was pretty much a corpse the last six months and Democrats were happy with it.

Until they weren’t. (Specifically, when her tenacity meant Trump got to nominate another justice.)

For The Good of The Collective, you simply can’t trust a corpse to abort itself at the optimal time. They have plans to fix this after stealing 2024.

They already have voted for a corpse in November 2020.

Read a report that half of PA’s mail-in ballots had already been returned, BEFORE the awful Fetterman debate, so I am not exactly sure that wreck of a performance will have so drastic an impact on the outcome as might have been expected.

The short and brutal truth of it: The Dems don’t plan on having Fetterman as a Senator, even if by some wild stroke of luck (and cheating) he wins. Within days of him being sworn in, he will resign and be replaced by his wife, who is barely competent enough to push the right button in the Senate voting as she is told by the Dems for the next six years.

And the hell of it all is, if you point out to the PA Democrat voters how they all are being played (or, after this all comes to pass, got played) for suckers, they’ll just look at you blankly as if, “whats the difference?” A Democrat’s a Democrat, right? They just can’t make the connection between casting crap votes and living crap lives.

The supply of PA Mail-in ballots is infinite, ergo, you can’t ever determine, when half of them have been returned!

“Gisele, you’ll be a great woman in the Senate…”

The cheating and stealing goes on in plain sight. They know they won’t get caught and even if they did, nothing would happen. Really sad

Thinking about this, who does Biden blame? He has a teleprompter system the size of an old drive-in movie screen, and still “Bidens it up.”

Nobody; Biden just takes advantage of the fact that this was how good he was at this when he was 20.

He doesn’t blame anybody, because he never even realizes he screwed up, and there’s no upside to any of his handlers bringing up the subject with him. They just clean his political diaper for him, and put him back out to play.

Typical Dumb-o-crat, brazenly lying, with impunity, and, blaming others for his own glaring failures and infirmities.

So inconvenient when the scapegoats decline to be thrown under the bus.

Somebody forgot. You want them quiet without killing them, you gotta buy them off. Some cushy board job. Go play in a think tank. A juicy contract to do all you party’s transcribing for the rest of time.

Heck, screw up your services right, you can even get tapped as the pre-scapegoat for a predictably disastrous nationalization of health care delivery. Nobody’s who couldn’t get health care dot gov running is looking for work, even now.

it’s good to be juiced in with the king.

What ever is the Democrat/ Leftist fault?