“So when extremists start attacking our schools, that’s not who we are. People who only want to fight to score political points should take that somewhere else.” 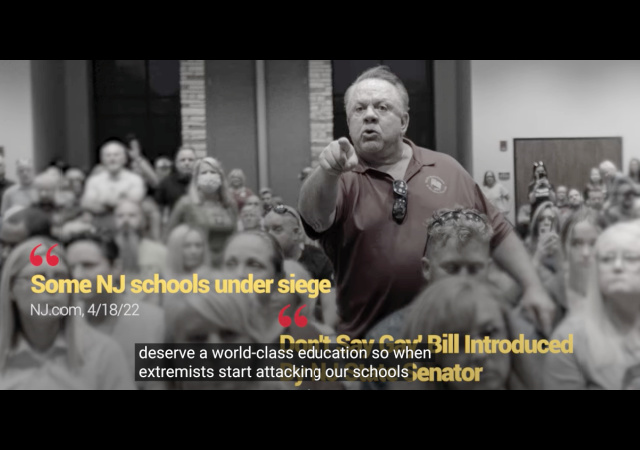 The ad says: “We don’t agree on everything in New Jersey, but we all agree that our kids deserve a world-class education. So when extremists start attacking our schools, that’s not who we are. People who only want to fight to score political points should take that somewhere else.”

Let’s find some of the “extremist” parents at New Jersey school board meetings.

November 24, 2021: Newsweek wrote about a school board meeting ending early when parents applauded a man’s racist comments. What did he say? Nothing racist:

The man, who identified himself only as Mark from Gladstone, accused the Bernards Township School Board of “teaching our kids about race and how to hate each other.”

“This is horrible: teaching our kids about race, how to hate each other,” the man said. “Teach white kids, ‘Oh, you got to give up your opportunity, if you get one, and give it to somebody of color.’ And then we teach the kids of color, ‘It doesn’t matter how good your are. You’re brown, so you just get.'”

“Nobody seems to care about these kids anymore,” the man continued. “It’s all about virtue signaling. It’s all about politics and it’s all about hating Donald Trump, anyone that’s a conservative or a Republican. … You want to talk about racism and being called names? It’s called ‘toughen up.’ It’s called ‘grow a set.'”

But one snowflake school board member, Ruchika Hira, got her feelings hurt. Play the racism card, and no one can fight ya:

“I am beyond upset to the point I really want to wait to respond,” she said according to the news website Patch. “What is the most upsetting part is someone did come up here and made racist comments. They basically said our children should learn to ‘grow a set’ and you know what the community members did? They clapped, and that to me is appalling.”

The ad made me remember a post Jeff Reynolds wrote in October when the National School Boards Association (NSBA) described concerned parents protesting against Critical Race Theory as “domestic terrorists.”

The NSBA asked the federal government to sic the DOJ, Education Department, and DHS on the parents. A draft requested the feds send military police to school districts, but it did not make it into the final version.

Attorney General Merrick Garland happily complied. In a memo, Garland told the FBI and US Attorneys’ Offices to meet and “strategize” on ways to deal with parents. Garland has never pointed to a specific threat or situation at a school board meeting.

Then the NSBA apologized and regret the letter.

Garland then told Congress the DOJ would still monitor the parents and he would not revoke the memo to the departments.

We’ve also documented the many instances of the NEA pushing far-left agendas on our children and employees.

Jersey indoctrinators are essentially domestic terrorists and subversives on government payroll. If you think that going to the DMV is bad, vital statistics, ah jeez… or being a student in a state operated stalag of propaganda.

Such a beautiful state, overrun by very ugly people.

It sounds like these idiots need replaced. Those parents sound like they care what their kids are taught and that’s a good thing.

Replace the school boards and have them fire teachers who violate MLK’s dream: “judge people by the content of their character not the color of their skin”.

Take them for a ride out to Pine Barrens?

Is that where one gets rid of guns but keeps the cannoli?

Parents, make whatever economic sacrifice it takes to send your children to an appropriate private or religious school. Don’t waste anymore time dealing with these people. Even if you win some concessions the same freaks will be teaching your children.

Very much in agreement. Whatever the Left touches it destroys. One way to fight back is for parents to leave the public school system and enroll their children in non-public schools.

I agree that the children are their parent’s first priority and with the idea of getting them out of that toxic school system. But in the bigger picture sending kids to private schools is unlikely to fix the overall problem.

It probably won’t reduce the funding the public schools receive and if you don’t inflict pain by cutting funding or booting those administrators out they still get to accomplish their twisted mission, just with less parental opposition. Frankly, they would love to have a free reign to do what they want.

Take a look at AZ and their school choice funding formula.

I think that public schools are too far gone to fix them. In order to fix them everyone that felt entitled to push CRT (and the same shit by any other name), whould have to be fired and forbiden from being involved in teaching. That would be a daunting task, easier to just move children outside the system, and then kill their funding.

The bad part about that is you STILL have to pay to support those public schools, even if your kid doesn’t go there. So, you get to pay for your kid’s education twice, at the least.

Welcome to the world of private school and tuition payments. I have had to face the same issue when I sent my children to one of the local Jewish days schools. My parents faced the same issue, and they were in a much lower income bracket than me, and my children face the same issue. The answer is, you consume less of other things. You have a smaller house than you like, you go on fewer and less expensive vacations than you would like to, etc.

Think of school taxes as protection money. At a private school, your child is far less likely to get beaten up for lunch money, or knifed for, somehow, “dissing” one of the protected classes.

Parents: one man of male sex and masculine gender, one woman of female sex and feminine gender. Extremely outside of the transgender spectrum that is so celebrated in the modern model. That said, keep women affordable, available, and taxable, and your little girls, and boys, too.

Two can play that game. Are they sure they want to go there?

Henryblowman, you have to be either a teacher, spouse of a teacher, or school administrator/spouse of administrator to have posted what you just posted. But that’s O.K. You’re obsolete. There is nothing you public school folks contribute that can’t be obtained much more cheaply in an alternative way.

Marco, your reply is so insanely nonsensical that it “isn’t even wrong.” Maybe you need to need to re-read my posting, carefully this time.

If you think private school is safe, then you haven’t been paying attention.

Your chances (and choices) are much better in the private school market than the public one though. Research is key.

Constant vigilance will be required from now on. Individual teacher at schools both public and private now feel empowered to teach their own values or lack thereof to the children entrusted to them.

Chances, yes. Choices, not so much. In a city, maybe. In a rural area, if there are any private schools available, they’re probably faith-based, and chances are good they’re not even your faith. I really wish it were otherwise, but “free” public tuition up until now has poisoned the market. It’s possible that the barrier to entry into this market is finally being overcome by the astoundingly negative value of public schools, but that doesn’t make the private school available for people who have kids now.

Schools are Marxists Seminaries, their indoctrination t o the younger generation is insuring they will win eventually.

Think of extremists as the right hand edge of the Bell curve.

I didn’t know I was that extreme.

“GREET THE CLEANSING BLADE OF THE ONE ETERNAL TRUTH!”
–Gregory Benford, Proselytes

Those who object to the Bell curve are generally from the left of both the curve and politics.

The DEI in that ad was quite noticeable. Could they be any more blatant?

Not unless they used “DIE,” but that is too close to their actual agenda.

One of the good things about the pandemic is it has really accelerated the use of, and acceptance of, on-line and other “alternative” learning formats. Ultimately people will start to realize pretty much anything of value taught in the public schools can be obtained on line, much cheaper. Now, of course, if parents need the schools to remain open to provide day care, free meals, and non-educational services, that’s different. But, for actually LEARNING subject matter materials, public schools are essentially an overpriced dead end, and this model will change as the current crop of useless public employees age out. And, surely if what we want to do is give out free food, we can find a way to do it far more cheaply than pay numerous teachers $100k+ per year to do so.

By 7th grade I was teaching myself much more than what I was learning in school, but from what I have seen, lots of people do not do a good job of self education. I thing that many people need a structured envirnment in order to thrive. Online learning does not work well with people who are not already highly motivated students.

Schools and teachers, just keep it up. All you are doing is minting new Republicans.

There is something to be said for children growing up in a rural envirnment, with constant interaction with parents, learning one on one. With my children, I was constantly teaching them about a broad range of things.