What about employees who want to be addressed as a mother or a father? They don’t count? 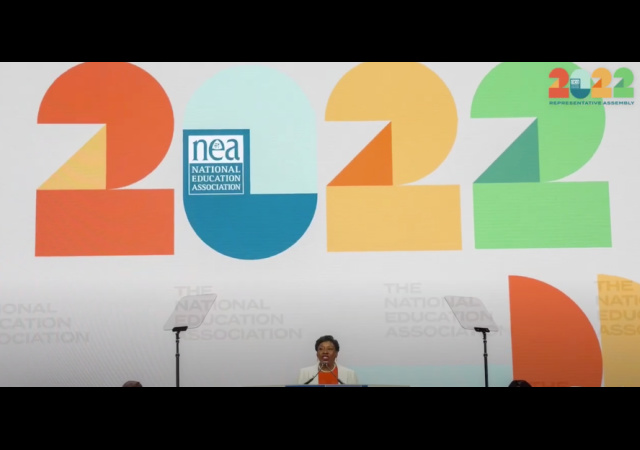 The National Education Association (NEA), the country’s largest teachers union, proposed to replace the word “mother” with “birthing parent” in contracts at its Representative Assembly in Chicago, IL.

Again, I have to stress the contracts part because other outlets bury or eliminate this information. The proposal is to change the language in contracts.

The NEA explained its members then don’t have to “worry about how a Board of Election/solicitor defines ‘maternity leave,’ ‘mother,’ and/or ‘father.’

“The language is an inclusive reflection of how LGBTQIA+ members build their families,” concluded the proposal.

The assembly did not bring the proposal up for a vote. Supposedly it could not happen “with current staff and resources under the proposed 2022-24 Strategic Plan and Budget” due to costing “an additional $5,000.”

It makes me wonder when they will push it into the curriculum. The left slowly chips away thinking we don’t notice it.

It’s ridiculous. I won’t go all outragey but if you want to be inclusive then don’t count out those who prefer to be called a mother rather than a birthing parent.

“Birthing parent” is inclusive for some but not for all.

An ongoing effort to X out girls and women.

Which make it so odd that these teachers’ unions are leading the charge in this nonsense. I would assume the membership is heavily skewed toward women… meaning real women.

NBI 63 would discard arcane words like “mother” and “father

Meanwhile, from the dictionary: Arcane: known or knowable only to a few people : secret; broadly : mysterious, obscure.

My God but these people are stoopid.

I think they were looking for the word “antiquated”, but we all know school is not for educating anymore, it’s for indoctrinating.

I think they were reaching for “archaic”.

I think they meant “normal.”

If those are arcane words, does that mean biologists are witches?

I will continue to be a father and a grandfather until my end. Anything else is simply not the English language.

‘Birthing parent’ and ‘Latinx’ are the greatest gifts to conservatives ever.

They’re SO utterly idiotic and so completely divorced from reality that even the normies hear it and question what the absolute hell is happening.

What about adopted children?
What about children who have “two daddies?”
What you gonna do when “Birthing Parent Superior” comes for you?
(You don’t want to piss off the Sisters of Mercy. Life is not long enough.)

How am I going to “mansplain” anymore? Is it “nonbirthingpersonsplaining?”

Another “teachable moment”. Not the lesson they think that it is.

More exclusive than inclusive by a long stretch. Can just wait for a toddler to utter his/her first words, not “mama” or “dada,” but “birthing person” and “non-birthing person.” It will just roll off the tongue.

‘Birthing person’ shortens up to ::burp::

Thanks, I needed a laugh

This is all part of the Marxist strategy- the blending and watering down of society as a means to initiate control.

We must not let it happen.

This is a psyops mind control technique ( using language to create a thought process) to manipulate the way people act because they know the mind leads the body into submission.

We need to get rid of the Marxist Public Seminaries

See? You guys never should have opened that closet or been amenable to the perversions of grown ass people.

But, Heather has two mommies.

One of whom may be her birthing person, or neither.

The vile Dumb-o-crats are all set to defend women’s rights, just as soon as they can figure out what a woman is.

mofa… no relation to mofu.

So, what do you call the mother of an adopted child?

This effort is odd, like a badly written sci fi knock off brand of fever dream fan fiction:
‘Resistance is futile, you will be assimilated into the collective.’
When people can point at your propaganda or narrative as an overused plot device you ain’t trying hard enough.

This “birthing parent” revisionist lexicon nonsense is so totally Orwellian and obnoxiously totalitarian, to rational minds. The Dumb-o-crats are too stupid to perceive this.

Mary, your feelings do not matter any more. The world now revolves around the feelings of a very small group of seriously damaged men who think they are women because they like to play dress up.

In other words. Misogyny: what men want, even deranged men – matter more than women.

All mothers should be offended by this. It’s dehumanizing.

We need to boot these corrupt, malignant morons to the curb, at every opportunity.

Yes, yes, this is why this is GOOD.
We have been unable to pry this bastard union off our establishments for most of a century.
They have been nothing other than a monstrous Democrat PAC for decades.
Now they are starting to do the heavy lifting FOR us.
We could never have achieved this level of shame and ridicule from outside.

This language is non-inclusive to people who are foster parents, adopt or have surrogates. It is so offensive that I can’t even… I am literally shaking.