“The stunning request was included in a draft letter to the president from September of last year, but was ultimately removed from the final version by the NSBA’s then-CEO Chip Slaven” 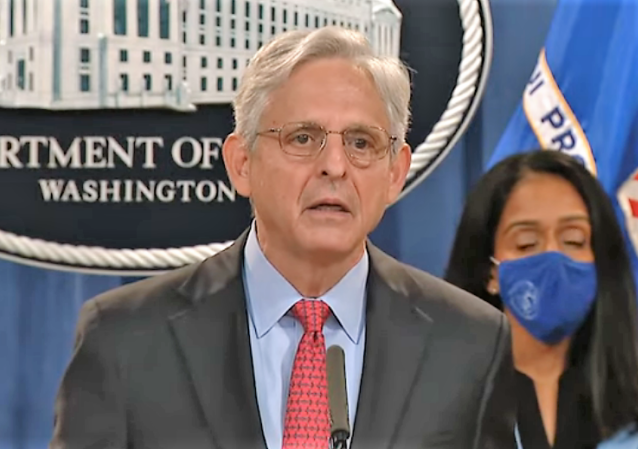 The outrages and overreach of the National School Boards Association, apparently acting either at the request of the Biden administration or conspiring with them, are astounding.

The letter that allegedly prompted Attorney General Merrick Garland to declare parents “domestic terrorists” and to direct the FBI to investigate, harass, and intimidate ordinary American parents into silence was ridiculous on its face, and the Biden DOJ reacted abominably. Or so it seemed, but as we soon learned, the Biden administration was agitating for the NSBA to compose the letter and to demand federal intervention so that they could stomp out any dissent among the great unwashed.

And the horrific abuse of power and plans for the tyrannical treatment of American citizens on American soil don’t stop there. An internal review reportedly found that that NSBA was planning to request that the National Guard and military police be sent to school districts in which parents were protesting the racist indoctrination, harmful covid policies, school closures, and a host of other travesties inflicted upon our nation’s children.

The National School Boards Association planned to ask the Biden administration to deploy the Army National Guard and military police to school districts beset by parent protests over policies including mandatory masking and the teaching of critical race theory, an internal review has found.

The stunning request was included in a draft letter to the president from September of last year, but was ultimately removed from the final version by the NSBA’s then-CEO Chip Slaven, according to a report from Milwaukee-based law firm Michael Best & Friedrich LLP.

The letter that was ultimately sent, on Sept. 29, was signed by Slaven and then-president Viola Garcia and argued that verbal confrontations and other incidents at local school board meetings across the US constituted “acts of malice, violence, and threats against public school officials.”

“[T]he classification of these heinous actions could be the equivalent to a form of domestic terrorism and hate crimes,” read the letter, which went on to ask the administration to “examine appropriate enforceable actions” under a raft of legislation — including the post-9/11 Patriot Act.

I won’t get started on the abomination of the Patriot Act, but it was (supposedly) never intended to be used against American citizens who attend and speak out at public school board meetings as if they are terrorists akin to al Qaeda. Yet it’s becoming more clear by the day that this is exactly what the Biden administration wants to do: treat anyone who opposes any aspect of their agenda, even parents who are protecting their children, as domestic terrorists to be rounded up by military police. On American soil. This is banana republic stuff, communist China stuff, and it cannot stand here in the United States of America.

The NSBA has suffered a great deal from their deal with the Biden administration. Well, except for their then-chief, Viola Garcia, who was rewarded for her tyranny-enabling perfidy with a cushy post.

The Department of Education appointed the president of the National School Boards Association (NSBA) to a federal board overseeing student progress, despite a controversial letter the organization sent urging the Biden administration to investigate opposition to school boards.

Cardona, you may recall, requested the letter that Garcia oversaw and sent to the DOJ.

Everyone who signed and/or approved the letter and remains at the NSBA is watching their organization crumble as Texas has now joined the ever-growing number of states dropping their membership.

23 states have now decided to cut ties with NSBA after they sent a letter to the Justice Department to investigate parents for "domestic terrorism." pic.twitter.com/CYPTY3RB19

It’s good that the NSBA is crumbling after its close coordination with the Biden administration, at least with both the DOE and the DOJ and who knows to what degree the White House was involved. Perhaps other organizations won’t be so quick to conspire against the American people and insist that upset suburban parents be treated by their own government like Osama bin Laden.

It’s time to start dissolving these acronym agencies. They have declared themselves enemies of the republic.

Start with the worthless DOJ and FBI. All they do is protect career criminal politicians. They aware probably the organizers of antifa and blm fascist.

DHS too. Repeal that evil Cheney/Bush concoction Patriot Act as a start. It was supposed to be a temporary measure but came right out of the gate spending billions to open the borders and spy on Americans. And they call us paranoid.

The TSA, NSA, ATF etc all need to go

You’re saying it, but I don’t think it’s fully clicking with most people: it’s almost too terrible to face.

It is situations like this for which the 2bd Ammendment was designed.

And, yes. I fully believe there are officers who would follow these orders.

We know they won’t protect children from an 18 y/o monster
But parents, they can’t wait to tackle and put in handcuffs… then put them in jail forever, like Jan 6

That’s why we can’t trust DC on guns or much of anything else.

The Marxists are taking over, going to fill gulags up with political prisoners

They sure showed their hand with the Jan 6 politicial prisoners. Include Pelosi and McConnell in their ranks.

This, of course, was to be a prelude to the full militarization od schools into left-wing indoctrination camp for politics and racial/sexual grooming. Relegating patriotic and concerned parents to prisons and courts for trying to stop the process. Garland’s family is said to be not only part of the process, but one of the core suppliers of CRT propaganda…for taxpayer money, naturally. Garland is a disgrace. An absolute disgrace.

Dumb-o-crats are goose-stepping totalitarians, to their cores. They cannot countenance the expression of dissenting, critical or opposing views and opinions.

Scratch a leftist, find a fascist.

It does feel that the DOJ and FBI are heavily politicised. Even if the FBI aren’t agitating and escalating things like the Capitol trespasses and the Whitmer kidnap plot, the choices of what to investigate and what to ignore appear to be highly partisan.

If I was American I’d be deeply concerned.

As I said on another article yesterday: when Trump retakes the WH in 2024 he really needs to CLEAN HOUSE! These people, if they were willing to do that, can clearly never be allowed near the reins of power again. They are all to clearly willing to abuse it to further their own agenda.

Let them howl if it happens

Run off the good students until 95% of the enrollment is willing to be indoctrinated…then point fingers at “White Privilege” when their own mistakes ruin them.

Shut down the Department of Education too. There should be zero federal involvement in schools

Revoking the Patriot act would be a good start. It’s not panned out the way it was sold. Then junk DHS and eliminate the armed agents from every agency without a primary LEO mission. FBI, Treasury, DEA, CPB, Marshals, even Park Service fine. IRS, Dept of Education or Interior, other random armed agents? Not so much.