Hamas: Friday’s “heroic” terror attack “will not be the last one, with [Allah’s] help.” 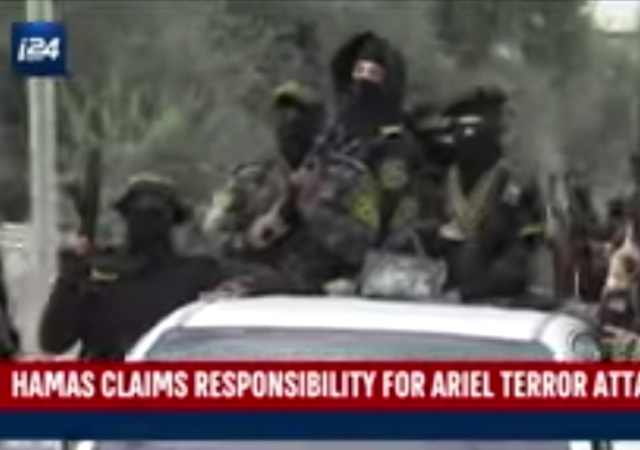 The Gaza-based jihadi group Hamas has claimed responsibility for the terrorist shooting that killed an Israeli security guard in the city of Ariel.

Hamas’s Izz ad-Din al-Qassam Brigades praised the cowardly attack carried out by two of its members as “heroic” and vowed that it “will not be the last one, with [Allah’s] help.”

Hamas’s Gaza-based chief also lauded the deadly shooting and promised to unleash further terrorist attacks against Israelis. “On Sunday, Hamas’s leader in the Gaza Strip called for more attacks against Israelis in the West Bank, saying the ‘real battle arena is there,'” the Associated Press noted on Tuesday. “In a speech, Yehiyeh Sinwar saluted the attackers who killed the guard,” the news agency added.

The 23-year-old Israeli security guard was shielding his fiancée when two Palestinian terrorists opened fire on them. “He was guarding the entrance of the West Bank settlement with his fiancée, Victoria Fiegelman. When the attackers began shooting, he shielded her with his body, saving her life,” the Jerusalem Post reported the attack on Friday.

The Times of Israel reported the Hamas statement:

In a rare move, Hamas’s military wing claimed responsibility on Monday for a terror shooting that left an Israeli security guard dead at the entrance to the West Bank settlement of Ariel on Friday night.

“This operation comes within a series of responses to the defiling of our Al-Aqsa [Mosque] and aggression against it,” the Izz ad-Din al-Qassam Brigades said in a statement. (…)

The “heroic, quality” attack “will not be the last one, with God’s help,” the Qassam Brigades said.

Hamas’s military wing has rarely issued statements taking responsibility for attacks in recent years. Even when avowed Hamas members committed attacks — such as when an East Jerusalem schoolteacher killed an Israeli in the Old City last January — the terror group praised rather than claimed the killings.

Since mid-March, Hamas, Islamic State, and other Palestinian terrorist groups have killed 16 Israelis in a wave of terror triggered by the Muslim fasting month of Ramadan.

The Ramadan festivities, which ended on Sunday, also led to widespread Palestinian rioting and violence on the Temple Mount in Jerusalem. Palestinian gangs pelted stones, assaulted Jewish worshipers in the Holy City, and held angry demonstrations where they called for the massacre of Jews. In a Ramadan sermon broadcasted by the Palestinian Authority TV, an imam prayed for the extermination of the Jews. “Allah, delight us with the extermination of the evil Jews,” he said.

[Author’s note: City of Ariel in Israel’s Samaria region, is home to a prestigious university by the same name. I visited the city in January 2016, and meet with the local mayor, university officials, and a group of Postdoctoral Fellows from India.]

Must be that “holy” month of Ramadan the press always deferentially refers to.

That’s when you can kill people and still be holy—so long as you wait till sundown to pig out on food and drink.

Hamas has won the coin toss and elected to receive.

Readers may be puzzled by the varying references to Ariel as a “city” and a “settlement”. In the English language as it is normally spoken, those terms are mutually exclusive. But in the context of Israel the word “settlement” has a special meaning that is not used anywhere else: it means anywhere a Jew happens to live, in the area that Jordan occupied for 19 years. It can be an isolated shack on a mountain top that has been uninhabited for 5000 years, or it can be an apartment in the middle of a major metropolis. If an Arab lives there it is not a settlement, but the moment a Jew moves in it becomes one. By definition it is impossible for a Jew to live in that area anywhere but in a “settlement”.

If this makes no sense, consider that the word “refugee” has a special meaning in this context too. It doesn’t mean someone who has fled from something and is now homeless, it means any Arab (but not a Jew) with an ancestor who left their home during the 1947-49 war, even if they now have a home, and even if that ancestor had only just recently moved into the home they left in the first place!