Imam on Palestinian TV Prays For ‘Extermination’ of Jews

Imam on Palestinian TV Prays For ‘Extermination’ of Jews 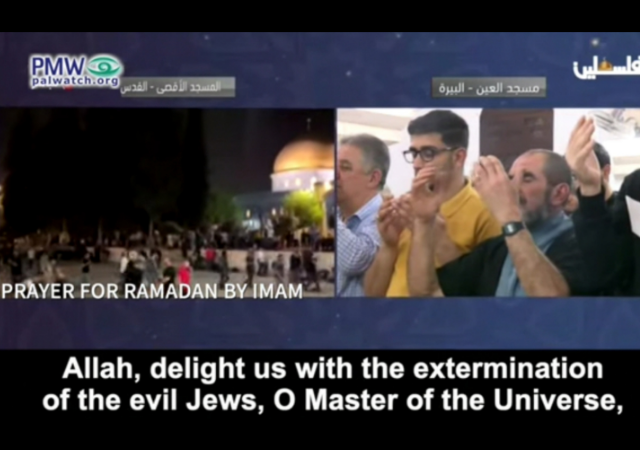 With violent Palestinian mobs attacking Jewish worshipers and clashing with the Israeli security forces in Jerusalem, Muslim clerics continue their campaign of incitement against the Jews and the State of Israel during the fasting month of Ramadan.

In a Ramadan prayer broadcasted over the Palestinian Television, an Imam led the worshipers to pray for the ‘extermination’ of the Jews, a video and transcript posted by the watchdog Palestinian Media Watch (PMW) reveal.

“Allah, delight us with the extermination of the evil Jews,” the Ramadan prayer shown by the Palestinian Authority-controlled TV said. The hateful call for prayer was given at the Al-Ain Mosque in El-Bireh, near Ramallah, the administrative seat of the PLO-led Palestinian Authority (PA).

The Palestinian Media Watch (PMW) published the transcript of the Imam’s prayer broadcasted by the PA TV:

“Grant us victory over the infidels… Allah, delight us with the conquest and liberation of the Al-Aqsa Mosque. Allah, make us among the first to enter, the conquerors, the worshippers, and those calling out ‘Allahu Akbar’ inside [the mosque] to You, Master of the Universe. Allah, delight us with the extermination of the evil Jews, O Master of the Universe, and [the extermination] of their hypocritical supporters who have evil in their hearts.”

This is not the first high-profile incident of Palestinian mosques being used to instigate terror and violence against the Jews during this year’s Ramadan celebrations.

During the recent festivities marking the Jewish Passover, Palestinians at the Temple Mount used the prayer call to incite terrorism against the Jews and Israel. “Calls on loud speakers urge Palestinian youth to stay and ‘protect the Muslim holy sight’ claiming it was under threat from Jews, as the instigators called on the Hamas rulers of Gaza, to join in the defense of the mosques by launching rocket fire on Israel,” the Israeli news website YnetNews reported last weekend.

The Gaza-based terrorist group Hamas responded to the call given at the Temple Mount by firing several rockets aimed at towns and cities in southern Israel.

Palestinians on Temple Mount are using the muezzin to incite against Jews.

This is being heard throughout the old city of Jerusalem. Unbelievable. pic.twitter.com/ZtTSPbRcy6

During Ramadan, mobs comprising of Palestinian men have assaulted Jews near the Temple Mount and pelted stones at busses carrying Jewish worshipers to the Holy City. Masked men inside the Temple Mount’s Al Aqsa mosque hurled Molotov cocktails at the security forces, setting minor fires in the compound — which is often referred to in the mainstream media as the third holiest site for the Muslims, Israeli police reports over the weekend said.

A religion from Hell. The devil is very proud of it.

More like the religion of pieces. Especially when they blow themselves up.

It’s not a religion

Does it matter how and when they die, as long as it is sooner rather than later.

It is a cult, created by a barbarian to cement his power. Taylored for people with average 85 and lower IQ’s. There is a reason that it made inroads in entitlement minded communities.

Islam is a totalitarian political ideaology pretending to be a religion.

Accurately, it’s a fake religion in every way, and more to the point, seriously misguided political pinheads.

What a coincidence! They want to “exterminate” the Jews because they hate that Jews are so superior to them in every way. So perpetually evil islam calls God’s chosen people “evil” which is exactly what islam is and always has been.

Meanwhile, back in the formerly United states we hear of how “racist” Conservatives are, usually with a litany of filthy language. Anyone else notice the similarities of the pro-communist/fascist liberal sub humans to islam?

Those who have not read what Churchhill had to say about Muslims should do so. He really nailed it in the late 1800s. As far as I can tell, every country who has allowed these subversive people in has come to regret doing so.

Guess I miss the middle ground.

Then visit the DC office of your RINO congressman. That’s where it’s all warehoused.

What do you get when you mix a muslim with a nazi?

An Imam who prays for the extermination of the Jews.

? Muslims were calling for the extermination of Jews long before fascism was invented.

And yet if any Jew publicly prayed, “G-d, delight us with the extermination of the evil moslems.” all holy hell (literally) would erupt from the usual suspects.

“Palestine” is not a real country. It is a political weapon used to wage war against Israel and to kill Jews. There is no justification for a Palestinian state.

Where are all the European, dhimmi Leftists and American Dhimmi-crats who perennially wax rhapsodic about the alleged benevolence, “tolerance” and peacefulness of Submission and its adherents, while whitewashing, ignoring and rationalizing the genocidal aspirations and violence committed by its adherents, against non-Muslims? They fall mysteriously silent whenever goose-stepping, genocide-aspiring Muslim supremacists spew their hate.

So, I’m thinking to myself, here is a perfect example of language that might benefit from being edited with Google docs for inclusivity…… Then, I though, maybe it already was.

It seems Allah hasn’t been interested in delighting Muslims for, what, 1200 years?

That’s what we Christians would call a clue.

It seems reasonable that we should do onto Muslims what they advocate for Jews.

Charming people. I can see why the “smart” crowd pretends to identify with their “struggle.” I see you went against the proper convention and didn’t use the term “Holy month of” Ramadan. You might get a fatwa for that.

Just saying in public what’s being preached in every mosque

I despise Islam. Joe Biden brags about his three majors.

He didn’t. He double majored, which isn’t hard. I earned enough credits to double major in political science and religious studies. I just didn’t want religious studies attached to my name as I was afraid people would think I was a Bible thumper. Already I’m having a problem finding a job.

My religious studies degree would have been due to the fact that as a poli sci major I took enough courses in Islam while studying Soviet Central Asia (that’ll age you) to earn the degree.

It came in handy later. I retired before Barack Obama was elected. And pronounced that Islam has nothing to do with Islam.

Repeat after me. “We may never know the motive.”