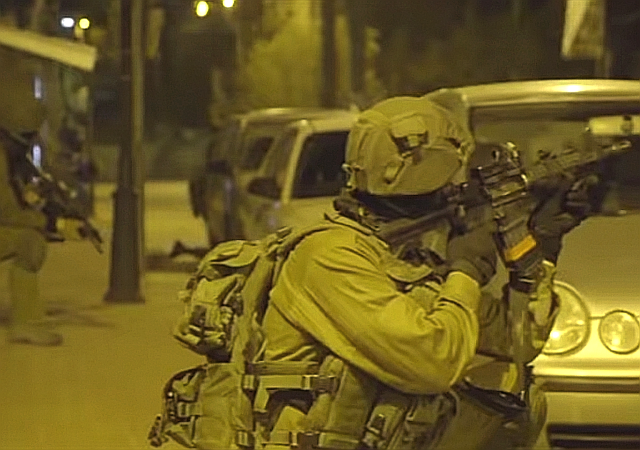 The Israeli military and security forces launched overnight counter-terrorism operations in the city of Jenin amid reports that the Palestinian Authority is losing control over the area. The Israel Defense Forces-led operations come as a response to a string of deadly attacks in Israel carried out by terrorists coming from the Jenin region.

On Friday night, Israeli troops came under heavy fire from Palestinian terrorists as they raided suspected sites in Jenin in search of weapons caches and terrorist masterminds behind the recent wave of terror attacks that claimed 14 innocent lives.

“Armed assailants are firing at IDF and Border Police troops conducting counterterrorism activity in the Jenin Refugee Camp and the city of Jenin, endangering their lives. In response, the troops are firing towards the armed assailants,” the IDF said Saturday in a statement obtained by the Legal Insurrection.

Following the terror attack in Tel Aviv which killed 3 Israelis and was perpetrated by a terrorist from Jenin, the IDF is operating this morning in the Palestinian city.
Heavy Gunfire is reported. pic.twitter.com/j58if1P2sX

The Israeli counter-terrorism operations began following Thursday’s attack by a Palestinian terrorist that left three dead and 15 injured when he opened fire on a bar in Tel Aviv’s city’s busy Dizengoff Street. The 29-year-old terrorist, Ra’ad Hazem, was a resident of Jenin.

The terrorist attacks, which erupted in the run-up to the Muslim fasting month of Ramadan, were carried out by terrorists with ties to the Islamic State (ISIS), Hamas and other Palestinian terror organizations.

A Palestinian militant was killed Saturday in clashes with Israeli security forces in the West Bank refugee camp of Jenin, where the troops were conducting a raid of the home belonging to the terrorist from the deadly shooting attack in Tel Aviv.

Three people were killed after Ra’ad Hazem, a 28-year-old Palestinian from the Jenin refugee camp, opened fire at a crowd of people sitting in a bar located on the city’s busy Dizengoff Street. The terrorist was shot dead after an eight-hour manhunt.

The Palestinian health ministry said Ahmed a-Saadi – an Islamic Jihad operative – was killed during the clashes with Israeli forces. It added that five others were wounded in by Israeli gunfire.

The Israeli army said the military operation was ongoing in the Jenin camp, a stronghold of Palestinian armed factions in the north of the West Bank. The military is said to have surrounded the home of the Tel Aviv terrorist in order to detain Hazem’s father – a commander in the Palestinian Authority’s security forces who praised his son’s actions.

Armed Palestinian assailants are currently firing at IDF and Border Police troops conducting counterterrorism activities in the city of Jenin. In response, our soldiers are firing toward the armed assailants.

This M-16 rifle used by one of the assailants has been confiscated: pic.twitter.com/m7a9gLLQpb

Surreal footage from Jenin this morning, militant in an active gunfire exchange with the #IDF as several civilians stand directly behind the militant recording with their phones. pic.twitter.com/UpwmZFLiQN

The Gaza-based terrorist group Hamas praised the slain PIJ terrorist in Jenin and called for escalation of violence throughout the territories controlled by the Palestinian Authority. “We salute the young people of Jenin who are carrying out courageous acts of heroism that define the next stage in the conflict with Israel,” Hamas spokesman, Fawzi Barhum, said. He also called for “the conflict to extend to all West Bank cities and villages.”

The Israeli military is reportedly beefing up border security to prevent further terrorist intruders from crossing into Israel. “The IDF held an operational assessment on Saturday after which officials decided to make it more difficult to break through the barrier separating Israel and the West Bank,” the Israeli TV channel i24News reported.

Israel’s greatest existential threat is the likes of George Soros. it is Soros who has laid the foundation for the likes of Obama and Biden to destroy America and its support for Israel, and thus give Iran nukes to use on Israel.

This is Obama’s third term. And he is still organ-grinder Soros’ monkey.

I left out the conclusion: Israel should whack Soros and anyone who takes his place. It’s either Soros or them.

We’re going to find Israel getting closer to Russian than to the US. They’ll have to do so for their survival.

Amen, This is war and it should be met with a 100,000 to one kill ratio. That level is because of these terrorists long track record and the fack that a very large percentage of so called Palistinians approve, their approval means they deserve to suffer.

Well, the kill ratio is already around 30 to 1, although that doesn’t take into account the lower life expectancy caused by all the embargos and blockades on the West Bank and Gaza strip.

Clearly a 30 to one kill ratio has done nothing to temper their belligerence. If 100,000 to one does not work, then it should be increased again by a factor of 10.

Just wondering if any of these weapons are former Afghanistan abandoned?

You think it was an ACCIDENT they were ‘abandoned’?

Remember: this is Obama’s third term. Anyone who doens’t believe that is….well, either they’re on the take, or they’re willfully ignorant.

Why did they ramp them DOWN?

Israels most pressing concern is Obama/Biden giving Iran nukes. Iran will bomb Israel and take the response – the elite of Iran will survive and Israel will be gone.

Can Iran survive the second strike capabilitiesof Israel? I would hope that israel is prepared to leave all of Iran covered in radioactive fused rock.

Why on Earth does the FBI need more tools than Israeli agencies that are up a against a vastly harder threat?

What is it going to take for the Ra’am coalition government-excuse me, the Bennett government – to fix the numerous breaches in the security fence?