“Palestinians on Temple Mount are using the muezzin to incite against Jews.” 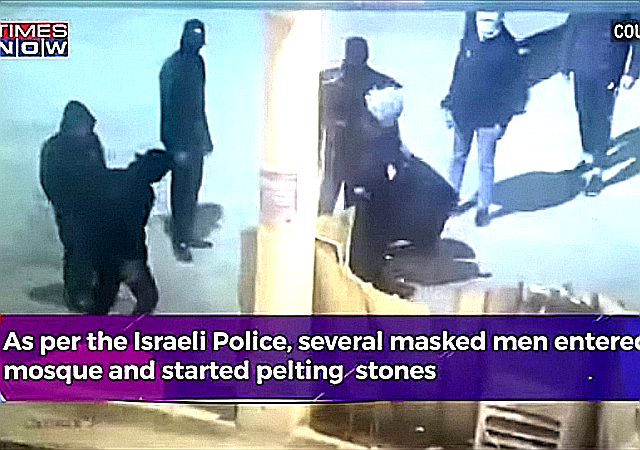 The Passover festivities in Jerusalem were marred by widespread violence as Palestinian mobs turned on Jewish worshipers. On Sunday, masked Palestinian men were seen pelting stones and assaulting Jews in Jerusalem’s Old City and near the Temple Mount.

“Video footage from the attack showed young men throwing stones at the buses passing by, smashing the windows and causing other damage to the vehicles,” the Israeli TV channel i24News reported. A “security camera footage showed a group of Orthodox Jews on their way to the Western Wall to pray being attacked in the Old City,” the broadcaster added.

Just horrific! Jewish worshipers in the Old City of Jerusalem brutally assaulted by Palestinians. Hi @USAmbIsrael. Is this what the @StateDept meant by urging “everyone to refrain from actions that further escalate tensions.” Are you seriously drawing a moral equivalence here? pic.twitter.com/8owlqsXAyi

Israeli security forces are acting to quell the violence in the Holy City. “Police and Border Police fighters have so far arrested two suspects on suspicion of stone-throwing, and police forces continue to operate in the area and are currently conducting searches to locate more suspects,” the Israeli police said in a statement obtained by the Legal Insurrection. “We will continue to act resolutely against violators and lawbreakers and maintain public peace and security,” the statement added.

The escalation of violence in Jerusalem comes as Israel is in the midst of a Palestinian terror wave triggered in the wake of Ramadan, the Muslim month of fasting. In recent weeks, at least 14 people have been murdered by terrorists linked to the Islamic State, Hamas and other Palestinian terror groups.

The Times of Israel covered the Palestinian violence unleashed on Sunday:

According to police, hundreds of Palestinians youths — many of them masked — were stockpiling rocks in the Al-Aqsa compound which they planned to use along with iron bars and makeshift barricades to riot and try to prevent non-Muslims from touring the compound.

“Alongside the visits, freedom of worship will continue to be fully preserved for the worshipers on the Temple Mount,” a police statement said. “The Israel Police will continue to act against lawbreakers and rioters.”

Also Sunday, rocks were hurled at buses just outside the Old City that were heading to the Western Wall.

The Magen David Adom ambulance service said seven people were hurt in the incidents and taken to the city’s Shaare Zedek Medical Center with light injuries. Police said two suspects were arrested and that officers were searching the area for others.

The driver of one of the buses said that 15-20 Palestinian youths were lying in wait for the bus as it neared the Old City and lobbed a heavy volley of rocks at it, shattering windows and the windshield. “I told the passengers to lie on the floor,” the driver recounted.

WATCH: Palestinians attacking an Israeli bus with rocks just outside Jerusalem's Old City. Passengers on board were on their way to prayers at the Western Wall.pic.twitter.com/SoMhfg99sq

The Arab rioters received support from the Palestinian Authority (PA) and Turkey’s Erdogan regime, Israeli media said, citing police sources. “Police believes hundreds of Palestinian youths who have been clashing with forces are funded by the PA, local contributions and Turkey, who want Hamas to join the fight for al Aqsa by firing rockets into Israel,” the Israeli news website Ynet News reported Sunday.

The news outlet also noted the role of the Mufti of Jerusalem, the foremost Islamic authority for the Palestinians, in the incitement of violence in the Holy City. “Jerusalem Mufti, Mohammed al-Husseini the Sunni Muslim cleric in charge of Jerusalem’s Islamic holy places, his deputy, the chairman of the Supreme Muslim Council, and the director of the al- Aqsa mosque are all charged with the management of the site. Some among them are regarded by Israeli security officials as dominant forces behind the violence” the Ynet News reported Sunday.

The Muslim clerics on Temple Mount used the prayer call to incite violence and terror against Jews and Israelis. “Calls on loud speakers urge Palestinian youth to stay and ‘protect the Muslim holy sight’ claiming it was under threat from Jews, as the instigators called on the Hamas rulers of Gaza, to join in the defense of the mosques by launching rocket fire on Israel,” the Ynet News added.

Palestinians on Temple Mount are using the muezzin to incite against Jews.

This is being heard throughout the old city of Jerusalem. Unbelievable. pic.twitter.com/ZtTSPbRcy6

Israeli government granted security forces full authority to go after Palestinian mobs in wake of latest round of violence. “Israeli security forces will be given a “free hand” by the political echelon to conduct any operational activity, Prime Minister Naftali Bennett said following another day of Palestinian rioting in Jerusalem’s Old City and Temple Mount,” The Jerusalem Post reported.

Why is no one shooting at the ones throwing stones? The price of attacking seems to be very low. It will never stop in that case.

Because if they shoot the stonethrowers they will be arrested and convicted and thrown in prison. So before shooting they have to weigh that against the chances of being killed by a stone. That is not a calculation a person should have to make.

If you made a list of all the religions in the world since the beginning of time and rated them according their peacefulness Islam would be in last place.

If you made a list of all the ideologies in the world since the beginning of time and rated them according to their peacefulness, Communism/Fascism/Marxism/Maoism would be the last in place, but the FIRST in place for genocide of their citizens.

Rather than make it easy for people to say….”well yeah, if you lump all those together”

Sum it up under one word: Totalitarianism

“Alongside the visits, freedom of worship will continue to be fully preserved for the worshipers on the Temple Mount,” a police statement said.

But not for the Jewish visitors, whom the Israeli police will arrest if they so much as move their lips, in case they are &gasp> praying.

“The Israel Police will continue to act against lawbreakers and rioters.”

And against Jews trying to worship.

Let’s see the European dhimmi and American Dhimmi-crats attempt to rationalize and defend this outrageous and evil supremacism, totalitarianism and belligerence by goose-stepping, Arab Muslim National Socialists. Tell us how much these people are alleged “victims” who have a right to attack non-Muslims who’ve been living in the Middle East for millennia before their ideology of hate was founded. Tell us that this behavior isn’t consistent with a long and blood-stained history of Muslim belligerence, genocides and conquests visited upon non-Muslims, over the course of 1,400 years.

Arab Muslim violence will largely stop when Leftist dhimmis and Dhimmi-crats cease enabling it, rationalizing it, rewarding it and otherwise giving moral and political support to it.