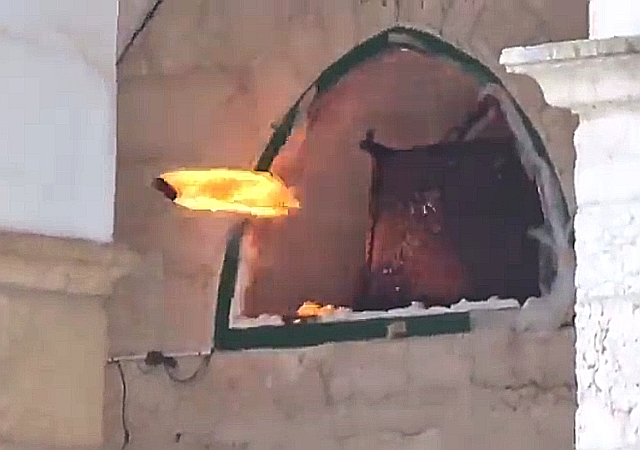 With masked Palestinian gangs at the Temple Mount hurling rocks and Molotov cocktails as Israeli police, Gaza-based terrorist group Hamas has given a call for more violence in Jerusalem during the upcoming weekly Friday prayers.

Temple Mount al-Ḥaram al-Šarīf, this morning, Molotov cocktail thrown from the mosque. Waqf standing idle, as they do for a few days now, allowing violent youth incited by hate and fake news to rage and act unruly. pic.twitter.com/BacvCwxQGr

As the Muslim fasting month of Ramadan coincides with the Jewish Passover festivities, acts of Palestinian terrorism and rioting have become a regular feature. “As in recent days, this [Thursday] morning at the end of the Fajr prayer, dozens of lawbreakers and masked men rioted and disturbed the order on the Temple Mount with severe violence,” the Israeli police said in a statement obtained by the Legal Insurrection.

On Wednesday, “lawbreakers and rioters threw Molotov cocktails from the mosque, one of which fell on the carpet of the entrance to the Mosque, causing a fire that was extinguished immediately and another in the doorway of the mosque, which could have led to a fire on the spot,” the statement added.

PATHETIC.
This is how Jews with baby carriages exit the Shechem Gate of the Old City of #Jerusalem – under heavy army protection! @naftalibennett – you go on CNN telling the world Israel has to be tough on terror – but this is the reality of Jihadist bullying on the ground. pic.twitter.com/1zPHdF8Ou0

In recent weeks, a string of deadly Palestinian attacks carried out by terrorists linked to ISIS, Hamas, and other terror groups, have killed 14 innocent people in Israel.

#Israel is committed to ensuring freedom of worship for all.

We will not allow a bunch of self-proclaimed “warriors” to ruin the holidays of the Abrahamic religions in #Jerusalem. #TempleMount #AlAqsa

The Times of Israel reported Hamas’s call for Arab ‘mobilization’ in Holy City:

The Hamas terror group on Thursday called on Palestinians to “mobilize” for Friday prayers at the Al-Aqsa Mosque, in defense of the holy site and Jerusalem.

In a statement, the organization hailed the steadfastness of protesters who “repelled the incursions of the occupation and its settlers with courage and pride, assuring everyone far and wide that Al-Aqsa has men who protect it and defend its purity, despite the ugliness of aggression and terrorism of the occupiers.”

Video footage of #Israel being bombarded with rockets last night.

Grateful we have the iron dome to keep us safe. pic.twitter.com/nV91Zxx6WL

The wave of Palestinian terror and rioting is now accompanied by Hamas rocket fire. Gaza-based terrorist groups fired rocket barrages into Israel on Wednesday night, “with a rocket damaging a parked car and a wall near a home in the college city of Sderot,” in southern Israel, The Jerusalem Post reported.

The Israel Defense Forces (IDF) responded to the Hamas rockets with strikes at terrorist infrastructure inside Gaza. “The violence on the Temple Mount threatens a wider regional conflict as a rocket was launched from the Gaza Strip in southern Israel on Thursday night,” Israeli news website YnetNews noted. “In response, Israeli warplanes struck targets in the Palestinian coastal enclave, attacking a military post and tunnel system, according to the Israel Defense Forces, which later prompted terrorists to fire another rocket salvo,” the news outlet added.

Amid deadly Palestinian violence, the Arab League — a body comprising 22 member states — is pouring fuel into the fire. It is spreading rumors that Israel allowed Jews and non-Muslims to pray at the Temple Mount and that as “such actions were a flagrant affront to Muslim feelings and could trigger wider conflict,” the Qatari state-run Al Jazeera TV network reported Thursday. “Our demands are clear that Al-Aqsa and Haram al-Sharif in all its area is a sole place of worship for Muslims,” Jordanian Foreign Minister Ayman al Safadi declared at the League’s meeting.

The Israeli government denied the Arab claims. “The [Israeli] foreign minister [Yair Lapid] insisted the official policy barring Jewish prayer on the Temple Mount remains and that it is backed by the security establishment, The Times of Israel reported Thursday.

Palestinianism is twisted. It is based on one thing, and that isn’t nationalism.

The people that suffer because of Palestinian leaders and hustlers, not only Jews, deserve better.

It’s the BLM of the Middle East.

The palestinian cause is a minority cause ever since they joined with transnational forces to abort the Jews, lost their war (i.e. “broken scalpel”), then the PLO progressed to sabotage the “two state” solution with a Jordanian Spring, that is a coup for capital and control in their host nation.

The pathologies of the ideology of “Submission” are intrinsic and obvious — supremacism, totalitarianism, belligerence and hatred of non-Muslims. That said, the Arab Muslim, so-called “Palestinians” wouldn’t be carrying out their perpetual, contrived and infantile violence and tantrums with such regularity if not for the fact that their contrived and fallacious grievance charade has found a receptive audience among European, Leftist dhimmis and American Dhimmi-crat useful-idiots. These idiots are as much to blame for the violence as the Arab Muslims who have are carrying it out and who’ve found potent political currency in it.

Obama interferes with their constitutional model, their parliamentary process, to remove an elected leader (a la Arab, Libyan, Syrian, Slavic Spring), and appoint a favored leader. Anti-fa[mily] and Some, Select [Israeli] Lives Matter insurrections with transnational backing. An Israeli Spring, in progress.

Expel these people summarily to Syria, or Lebanon. Raze their houses.

Send them to Jordan, where they actually belong.

Well, since it’s obvious that the moslems are no longer considering Al-Aqsa Compound a religious center but are using it as a rallying point for terrorist action the Israeli government should immediately remove control of the Temple Mount from the Jerusalem Islamic Waqf, remove the current Grand Mufti, expel all moslems from the Temple Mount (including the al-aqsa compound the the Noble Sanctuary) and send the whole terrorist lot back to the Hamas terrorist controlled territory. If the moslems want to play games with their holy sites then I see no reason why Israel shouldn’t play along. And expel the whole lot.