Palestinian rioters at the Temple Mount chant: “Jews, remember Khaybar, the army of Muhammad is returning.” 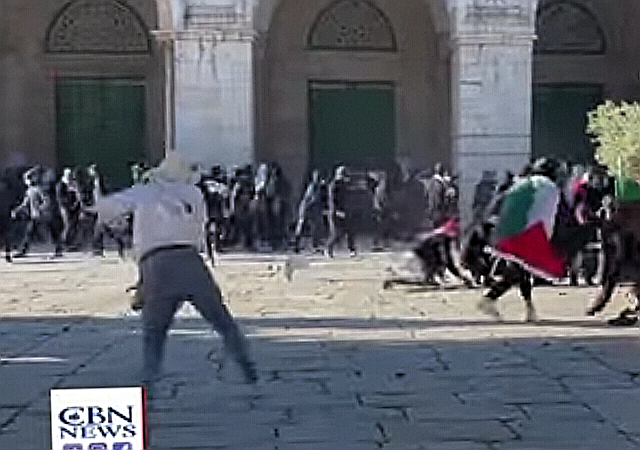 Amid a surge in violence by Palestinian mobs rioting at the Temple Mount in Jerusalem, terrorist group Hamas has intensified rocket fire on Israel. On Friday night, the Gaza-based terrorist group fired rockets into southern Israel, the fourth such attack within the span of a week.

Hamas-backed terrorists fired three rockets overnight but failed to hit populated areas inside Israel. One of the rockets fell inside Gaza, exploding “near a UN school in the city of Beit Hanoun on the northeast edge of Gaza, lightly injuring one passerby,” the Israeli news website Ynet News reported.

Israel’s Iron Dome air defense system has been able to intercept most of the rocket fire from Gaza in recent days.

According to the military, from the first salvo, one rocket landed in an open field in the Sha’ar Hanegev regional council, while the second fell short in the Hamas-run coastal enclave.

Some Palestinian media reports said the failed launch landed near a residential area of Beit Hanoun in the northern part of the Strip, injuring one person. There was no immediate statement from Gaza medical authorities on the matter.

Early Saturday, a third rocket was fired from the southern Gaza Strip, landing in an open area near a town close to the border, the IDF said. (…)

It was the fourth rocket attack on southern Israel in a week, after one fell short in Gaza on Thursday, one landed near a home in the city of Sderot on Wednesday, and another was shot down by air defenses on Monday.

Palestinians Call for Massacre of Jews

Meanwhile, Palestinian mobs continued to defile and desecrate Jerusalem’s Temple Mount — often touted in the mainstream media as the “third holiest” site of Islam. Over the weekend, gangs of Palestinian men, who barricaded themselves inside the Al-Aqsa mosque on Temple Mount, pelted stones and threw Molotov cocktails at the Israeli security forces and passersby, causing multiple fires in the compound.

Khaybar refers of a 7th century Jewish community massacred by Muhammad, the prophet of Islam, and his companions. The battle of Khaybar is the earliest example of Jihad where the men of the town were killed by the conquering Muslim army, and women and children were taken as slaves, early Islamic sources say.

Here is another clip with Palestinians flying Hamas flags and chanting for war. pic.twitter.com/GvQ2lqAPKC

The wave of violent protests appears to be in response to a call for ‘mobilization’ at the Temple Mount issued by the Gaza-based terror group. “Hamas in a statement on Thursday called on Palestinians to ‘mobilize at dawn tomorrow in defense of Jerusalem and Al-Aqsa mosque’,” The Jerusalem Post reported.

A mob led by supporters of the Hamas #terrorist organization chanted #antisemitic slogans on the Temple Mount calling for & glorifying the mass slaughter of #Jews.

These extremists are attempting to take over Al-Aqsa and force out moderate Muslims peacefully observing Ramadan. pic.twitter.com/2olntPCw6v

The Israeli government is doing its utmost to defuse the situation, including upholding of a ban on Jewish prayer around the Temple Mount compound during Ramadan, the Muslim month of fasting which is set to end in early May.

“Israel is maintaining the status quo, which includes the freedom of prayer for Muslims and the right to visit for non-Muslims. The police enforce the ban on Jewish prayer,” spokesman for Israel’s Ministry of Foreign Affairs, Lior Haiat, said. “Over the last few years, Israel is not allowing Jews to visit the Temple Mount during the last 10 days of Ramadan to prevent any friction,” he added.

The Israeli gestures have done little to stem the surge in rioting and terrorism by the Palestinians. “Israeli security forces are on high alert with the Muslim holy month of Ramadan coinciding with the Jewish holiday Passover and Christianity’s Easter,” the Israeli TV channel i24News noted Saturday. At least 14 innocent people have been killed by Palestinian terrorists during this year’s Ramadan violence.

All this insanity over a patch of dirt and a feud that’s been going on for so long that nobody even remembers why it started. This is why we can’t have nice things.

It is not about the land. “Palestine” is a lie with the only purpose of killing the Jews and ending Israel. The whole thing has been documented from start to present, so many do remember why this all happened.

Off topic, but Biden was in Seattle Thur/Fri. A ton of flights cancelled because of it (ours included).

You can find his slurred and dementia filled speeches are up on the usual sites.

What I found especially unusual was they had him at a park and then at Green River Community College where he railed against big pharma (presumably because he has zero accomplishments to shout about). A freaking COMMUNITY COLLEGE!!!! They really needed to control the audience and shield hiim. The University of Wa and a dozen other venues must really be slighted (or not, it is Biden afterall).

They really don’t understand the demographics of Green River. I actually attended there a few quarters before going on to a 4 year college. It’s a good school, but this is where the WORKING CLASS people attend school. You don’t go there for grievance snow flake studies, you go there because you are either getting votech training or you don’t want to pay university tuition.

A few photos were priceless. Seems like the Buckley/Enumclaw crowd made it out there.

They don’t call him Hiden Biden for nothing!

Historians: Was Israel’s decision (2005) to turn Gaza over to Fatah (which later lost control to Hamas) a terrible blunder, or were there good reasons for the withdrawal?

And as I’ve said before. It’s time for the Israeli government to remove the authority of the Jerusalem Islamic Waqf, remove the Grand Mufti, expel all moslems from Temple Mount , al Aqsa and the Noble Sanctuary and send them all packing back to the so-called “palestinian territory”. And then send Hamas and the rest of the terrorists to a suitable moslem country (Syria, Jordan). Time for the Israeli government to take off the kid gloves and deal with the situation. But I doubt they will.

The contrived propaganda lie/mythology of fallacious Arab Muslim victimhood — parroted, propagated and lent deference and legitimacy, by the vile and despicable European Leftist dhimmis and American Dhimmi-crats, needs to be put to rest and destroyed. As long as western dhimmis and Dhimmi-crats keep on rewarding and legitimizing fallacious and contrived Arab Muslim grievance-mongering and posturing, Arab Muslim terrorism will never end, because this idiots know that they’ll find sympathy among the dhimmis who gullibly swallow their every propaganda conceit.

a UN school in gaza. gotta wonder what that’s like: