“…you can’t allow the American people to be ignorant of what’s going on around them by letting politics be secret,” Whitehouse said while at the same time being secretive about the pervasive influence of dark money on Democratic politicians including his own election campaigns. 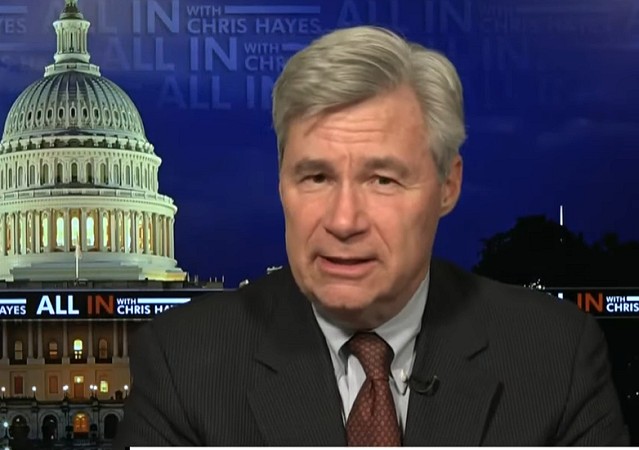 There are a lot of deeply dishonest, wildly hypocritical politicians in Washington, D.C., but few are worse than Democrat Sheldon Whitehouse, who has ostensibly represented Rhode Island in the U.S. Senate since 2007.

The longtime liberal politico has made climate change, threatening the Supreme Court, and special interest funding in politics his main focal points during his time in office, but has always managed to conveniently overlook the pervasive influence of dark money forces not just on his party but on his own political campaigns (read more on that here as well).

We saw yet another of his “forgetful” moments on the issue of Democrat dark money funding during an interview Whitehouse did earlier this week with MSNBC host Chris Hayes.

Ahead of the State Department’s so-called “Summit for Democracy” this week, which Whitehouse touted in a Boston Globe op/ed and which included President Biden giving scripted speeches, he told Hayes during a discussion about the DOJ’s lawsuit against Texas over their redistricting maps that there were “two separate dark money, dark economy problems” America faced, and that both alleged “problems” stemmed from GOP machinations:

Hayes: How important do you think this summit is this week? Is it a real thing or is it — is it show?

Whitehouse: No, I think the summit is real. I think that there are two separate dark money, dark economy problems that America is facing. One is the dark money control that is packed to Supreme Court that has done climate denial, that is behind voter suppression, and that runs so much of Republican politics.

The other is on the international side kleptocrats and criminals are able to hide enormous amounts of stolen money, and they hide it in rule of law countries behind the secrecy that is used by the domestic schemers. So, the to relate in that sense and the shared solution for both is a lot more transparency to give to American citizens, voters. What James Madison called for which is knowledge because knowledge will forever govern ignorance. And you can`t allow the American people to be ignorant of what`s going on around them by letting politics be secret.

Another @SenWhitehouse interview where he completely ignores the dark money on the left and acts like it’s only a GOP issue. What a joke. pic.twitter.com/o0arIAQoK3

On his Twitter page Thursday, Whitehouse boasted of heading to the floor of the Senate to decry “dark money organizations bankrolling both climate denial and far-right court capture”:

Left out of his remarks, of course, were the fresh reports of the over a billion dollars that were raised by “liberal dark money juggernauts” to carry Democrats (including judges and district attorneys) and their policies over the finish line in 2020:

The Arabella-managed network has solidified how Democrats quietly benefit from massive amounts of anonymous donations as they simultaneously rail against the influence of dark money in the political sphere.

Each of the funds acts as a fiscal sponsor to other liberal nonprofits, meaning they provide their tax and legal status to the nonprofits housed beneath the funds. This arrangement allows the fiscally sponsored groups to avoid filing tax forms to the IRS, which would shed light on their financials.

Let’s also take a look at how much various Never Trumper factions purposely aided Democrats in the 2020 elections with their own dark money efforts – which included funding from Democratic groups:

It was a record haul for the relatively young nonprofit organization, which was established in 2018, the second year of Trump’s term in office. In 2019, it raised $9 million, according to a filing.

The group, called Defending Democracy Together, used its haul to spend more than $13 million on grants during 2020. Its biggest single contribution, $6 million, went toward one of the group’s projects, Republican Voters Against Trump, according to a 990 tax disclosure first reviewed by CNBC.

Defending Democracy Together is, like WorkMoney, a 501(c)(4) nonprofit that does not publicly disclose their donors. Its 990 disclosure form shows two anonymous donations each worth over $10 million. One of those donations came from the Sixteen Thirty Fund, a dark money fund that often backs Democratic leaning causes.

Don’t forget the Lincoln Project, either, although their influence on Democrats appears to be waning a bit in light of the John Weaver grooming scandal and the group’s disturbing attempts at covering it up.

I know a lot of people hate “whataboutism” in politics, but this is one issue where it simply can’t be avoided. The fact of the matter is that the dark money groups are here to stay, regardless of Whitehouse’s superficial protestations to the contrary.

The primary reasons why are that “both sides” enjoy the benefits they bring and also because most Republicans thankfully aren’t purists on the matter and understand that when Democrats like Whitehouse rail on about stemming this particular funding flow that they have zero intentions of holding themselves and their party to the same high standards to which they want Republicans held.

No need for sarc tag.

Sen Whitehouse is a BUFFOON.

If I lived in Rhode Island, I would be embarrassed.

There is no better reason to be embarrassed than Weldon Shithouse’s performance at the Brett Kavenaugh Confirmation hearing that saw him delve in to the smelly subject of Boofers that had been referenced in Kavenaugh’s Yearbook.

Of course, it was only natural for Weldon Shithouse to go there but was likely shocked when Kavenaugh countered him with, “You want to talk about flatulence at age 16 on a yearbook page, I’m game.”

And wouldn’t we know that Juan McStain went to join Satan on the same day that the “Lion of the Senate” Ted Kennedy departed to sit at Satan’s knee and with the same Brain Cancer disease.

This is the kind of “Term Limits” that we can hope will help flush out our Congress since “Election Irregularities” has become prominent in our Country; it’s one form of “Peaceful Protest” that the Divine controls.

I was asked the question, “What is the difference between a politician and a whore?”
after thinking for some minutes, I answered: “I don’t know.”

The whore gives you something you want in exchange for your money.

And a whore stops screwing you after you die.

No whore I have heard about has “Honorable” for a title.

So they’re more honest, too.

The rule of thumb is, whatever evil or so-called evil they speak out against, they themselves are the exception to the rule because of such and such.

This guy Whitehouse is perfect for a part in a sequel of the comedy “Airplane’. He already looks like a parody of himself.

He sure does. Maybe he’s got a twin brother.

Xi said there’s more where that came from. lol.

Did anyone really expect Sheldon Whitehouse to be acting honestly to make the world better?

Hint: If you answered “yes” the lobotomy was a success!

The guy is so much like Kerry, except he has a penchant for high school yearbooks.

I suspect the big uninvestigated scandal is how much of that Democrat dark money is illegal foreign cash, most likely Chinese or Middle Eastern. Remember when Obama turned off credit card validation on small donations and he started getting a ton of illegal donations from the Middle East? When he got caught he claimed to have refunded some of it, but that was never verified.

There is no bigger horses ass in the country than Weldon Shitehouse.

When they say “Get the money out of politics,” they always only mean the other side’s money.

And you’re the other side.

Sheldon is one of those very WASPy names that Jews of 100 years ago started giving their children in the hope that they would thus avoid antisemitism, but so many Jews did this that they became associated with Jews, so that no self-respecting goy would use them any more. However I am delighted to report that Whitehouse comes by his name honestly, being a genuine WASP whose parents didn’t get the message. So at least he’s not one of us…

i remember Whitehouse and his incredibly smarmy prepared statements during the Kavanaugh hearings. Always impressed me as a fellow who may have a few bodies buried under the back porch.

There is a certain Ogre-like appearance and behavior about this person that makes you want to pull your children close whenever he is in the area.

Stacey, you described him perfectly in your opening sentence, as “deeply dishonest.” Thank you. Nailed it.