Sandmann: “At this time I would like to release that NBC and I have reached a settlement. The terms are confidential.” 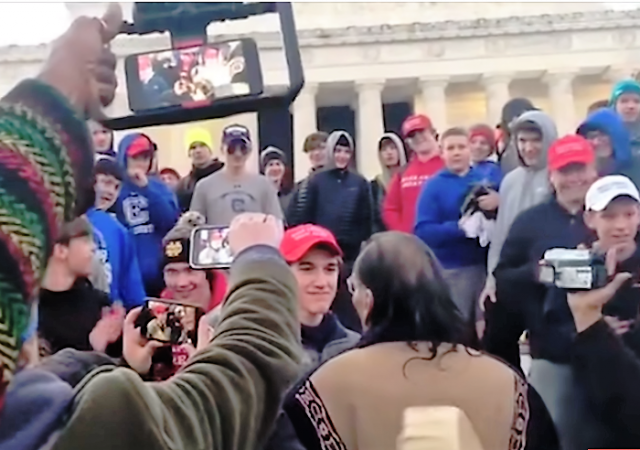 Nick Sandmann settled his lawsuits against CNN and The Washington Post.

His lawsuits against NBC, NY Times, ABC, CBS, and Rolling Stone survived motions to dismiss them.

Now Sandmann has settled with NBC:

At this time I would like to release that NBC and I have reached a settlement. The terms are confidential.

LoL. You’re funny. There’s not going to be any “cha ching!” for Sandmann after his lawyers get done deducting their payments for their services rendered. There never is much left for the plaintiff in cases like this. NBC threw the plaintiffs a settlement with a confidentiality agreement attached to muzzle any discussion. They lawyers will deduct their massive fees from said settlement and throw Sandmann a pittance for his efforts. The only truth of the matter is that Sandmann won’t be profiting much from his lawsuit. That’s for sure.

And how much do you bet that part of that “settlement” is that NBC will be stating that they are not admitting guilt in any manner but are paying the money simply to make the lawsuit go away. That’s what billion dollar corporations do. It’s all just the expense of doing business for these corporations.

In my experience, major media companies typically carry insurance against defamation (along with insurance for copyright and trademark infringement). It is common for the insurance carrier to settle claims after the denial of motions to dismiss in order to avoid the defense cost of a trial, and the potential for a runaway jury award. I’ve seen insurance settlements for as low as $150,000 and as high as $750,000 in cases that I thought had no better than a 40% chance at trial.

If Nick’s lawyers deducted hard costs and contingent fees from such a settlement, he would net somewhere between $90,000 and $500,000. It’s impossible, of course, to know where in such a range his NBC settlement fell. But I offer that real world experience in order to rebut the conclusion that he’s receiving no financial benefit here. I would bet my own money that his take home net recovery on this is over $100,000.

LoL. Doesn’t change my statement in the least. The only people that will profit significantly from any “settlement” are the lawyers. They always do in the end. And they’ll throw a pittance to Sandmann for his efforts and we’ll all cheer that he won and that will be it. If you think NBC is going to change from this you’re wrong. Just the cost of doing business for them that will be written off on the bottom line and that will be it.

The gist of my comment is that Nick will see more money than the lawyers from the settlement. That’s just the nature of contingent fee contracts.

If you don’t understand that, you’re simply uninformed.

The fact that NBC made a settlement with Nick Sandmann means they’d rather pay money than have their name dragged through a civil lawsuit.

I agree with your comment but would add that they also fear the discovery when a lot of internal documents would have to be provided and would be published.

No, the settlement just means that NBC realized it would be more profitable in the end to pay off Sandmann and his lawyers with a negotiated settlement than take their chances with an unpredictable jury. They’ll just write the money off as a cost of doing business and that will be the end of it.

Would love to know how big the settlement amount is. I suspect that it is not that large – just enough to cover legal bills with a six figure amount left over. Richard Jewell didn’t receive much from his settlement – made lots of money for Lin Wood but Jewell died broke.

I suppose the only way to get an idea is to observe Sandmann’s life-style. Is he living in a multi-million dollar mansion now with a garage full of exotic cars or is he living a relatively modest lifestyle?

Fortunately Lin Wood was one of Sandmann’s lawyers not his actual lawyer, and to judge from his atrocious abuse of Kyle Rittenhouse I think it is fortunate someone who knows Nick Sandmann got him to take on other lawyers.

The way that the kid was raised you won’t see a multi million dollar mansion. What’s he’s likely to have is a very large investment portfolio (and that’s private).

Or, is he making conservative investments rather than spending like an NFL player? That young man does not strike me as somebody who is stupid and frivolous.

Does he get a public apology out of this settlement or are they just buying him off? Kid deserves whatever he can get. Personally, if it was me, I would very much want that apology. AND a big check.

The apology would be worth money to me. Meaning I’d want an apology, and would be fine for a lesser amount. You know they would trying to avoid an apology like the plague.

When you make a confidential settlement, you don’t get apologies because they don’t admit fault. It wouldn’t need to be confidential otherwise, unless they only thing they wanted to hide was the money.

That said, the message is made clear. Watch what you put out or face slander/libel damages. Unfortunately, I don’t think they’ve learned much as Sandmann only got traction because he wasn’t a public figure. They are still free to libel and slander public figures with impunity.

There is nothing they can do at this point to further damage their reputation.

I’m guessing we will know how big the settlement was based on whether he settles with the remaining defendants. Once he hits between 5 and 10 million, he may choose to go for the public apology, rather than the settlement.

If it’s mid-six figures, he will settle with all.

The chances that this was a 7-figure settlement are just about zero. That’s just not how defamation claims work in this country. Sandmann is further hamstrung by the reality of his inability to particularize his monetary damage. This is unlike some other cases where businesses or individuals were defamed and they lost revenue, market share, stock price or some other actual finance impact that can be measured in real dollars. In those cases, there’s a greater likelihood that huge damages can be obtained as was the case of the NY brokerage firm versus the Wall St Journal that remains today one of the biggest defamation awards in US history.

Oh please, I suspect this “settlement” is just enough to make the lawsuit go away for NBC and they’ll just write it off as a bottom line cost of doing business. That is all. And then NBC will continue to do business as usual.

Nick Sandmann seems to be a smart young man. His privacy has been destroyed, but I expect he’ll use his future wisely.

Randy Quaid
@RandyRRQuaid
·
9h
For 10 million dollars I’ll stand on your front lawn myself in a white bathrobe with a big hose, smoking a cigar and drinking a beer. This is a special discounted limited one time offer good til Christmas Day

That’s actually pretty tacky. Sure, sure, Mr Public, you’ve been following the case closely, but you’re only suited to hear about part of it.

Confidential terms aren’t a good way to showcase the American justice system; they’re a way to bury any lessons this entire episode might teach. Particularly the important lesson$, the one$ which would really bite future offender$.

On the other hand . . . once a specific award is known all sorts of clowns will pop up with helpful advice on how it should be spent. Annoying but probably tolerable.

1. No one owes you an explanation no matter how satisfying it might have been.

2. You can do it this way or you can do it the Oberlin way where they tie up the damage awards as long as possible in court with appeals and play trench warfare with attorney costs. Appeals always have a puncher’s chance of succeeding and you get nothing in the meantime except more legal bills.

Sandmann et al. made the smart choice….heck, some people even negotiate a settlement AFTER the verdict and damages are awarded just to make the appeals process go away. Admittedly, the victorious party has much more leverage at this time but it can still happen.

Now that NBC, CNN and Wash. Post have settled as opposed going to Court and airing the ‘underbelly’ of how they process their “click bate news”, the other media outlets who are yet to settle on their lawsuit may come to terms they be facing an even higher dollar range to settle. As pointed out, those who have not closed on a settlement may be that young Mr. Sandman is now, more than before, able to afford to ride out a long drawn out law suit through the courts for the sake of public disclosure and still end up with a win-win.

St. Nick should send the toothless tomahawk agitator a Christmas feather and maybe a pair of bongos…. Bongo Fury

Nick Sandmann is probably a few million dollars richer now than before the msm defamed him, and he has four cases to go.

The msm defame private individuals with great relish all the time. Sometimes, they do so as part of a criminal conspiracy to enrich their own personal friends. (That wasn’t the case with the Sandmann case, which was political.)

However, the prospect of exposure of one’s internal procedures through discovery is frightening.

To those complaining about Sandmann settling: It is SOP in such cases that the defendant admits no guilt. Anyone who talks otherwise has no idea what he’s talking about.