Thank you for your honesty, Joy. 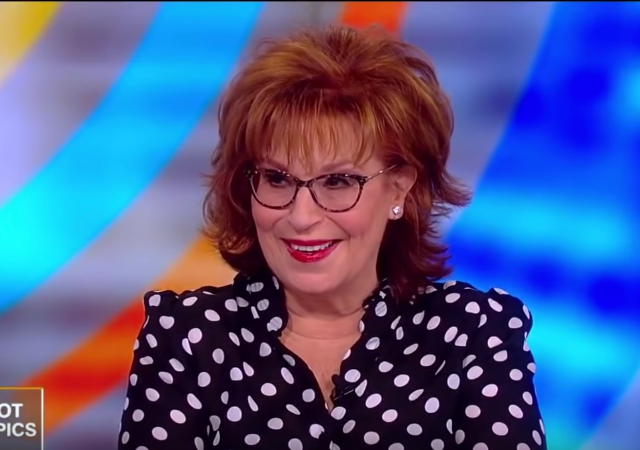 On The View, Whoopi Goldberg asked why so many in the media and celebrities jumped to conclusions about the viral video with the Covington Catholic students.

Without skipping a beat, Joy Behar confirmed what everyone already knew: “Because we’re desperate to get Trump out of office.”

WHOOPI GOLDBERG, HOST: Many people admitted they made snap judgments before these other facts came in. But is it that we just instantly say that’s what it is based on what we see in that moment and then have to walk stuff back when it turns out we’re wrong? Why is that? Why do we keep making the same mistake?

JOY BEHAR: Because we’re desperate to get Trump out of office. That’s why.

ABBY HUNTSMAN: Not everybody though.

GOLDBERG: What does that have to do —

BEHAR: I think that’s the reason. I think the press jumps the gun a lot because we just — we have so much circumstantial evidence against this guy that we basically are hoping that Cohen has the goods and what have you and so it’s wishful thinking.

GOLDBERG: Right, but let’s talk about the kids in this particular confrontation since that’s the question at hand.

Whoopi Goldberg on the media smearing the Covington Catholic boys: “So many people admitted they made snap judgments before all these other facts came in. … Why is that? Why do we keep making the same mistake?”

Joy Behar: “Because we’re desperate to get Trump out of office.” pic.twitter.com/wlwwaxfZRx

Shocking (not shocking) revalation: Joy Behar actually says the media is desperate to get Trump out of office.pic.twitter.com/6lF1YA6yW2

Think about what these two are saying and what Maude Behar is revealing. They are admitting that the entire goal of the media is to do whatever it takes to remove Trump from office. https://t.co/ChUYSmJle2

How do I know that the Shutdown drama is badly hurting the Democrats?

The total fixation of the media and their entertainment minions on the Covington Catholic students.

Okay, I think I can agree with you assessment.

But, personally, I draw the line at changing the Media’s diapers.

They created this stinking mess.

This was deliberate attempt to warm up the anti-white, anti-Catholic ferver in advance of Amy Barrett being nominated.

Now it will have the exact opposite effect

Behar has an IQ just above room temperature. If it’s obvious to her it is obvious to almost everyone.

I keep my house at 65 in the winter, I can see why people might think she is that dull.

I think the press jumps the gun a lot because we….

This is so funny. So it’s Woodward & Behar now?
Most the media is no better than these cackle-hacks, so, sure. I’m all for dumping them on the same level.

A friend of mine has a moron for a wife. She gets her “news” from the Today show, Ellen, the View, and NBC Nightly News.

After a few drinks and burning dinner, she just sits there mumbling about that “Idiot Trump” and the “F’n Jews”.

I quit going around them much after the 2016 election

Did I mention she’s a moron?

It is obvious that the kids have good lawyers. It they didn’t the media would be shamelessly destroying their lives and paid agitators would be smashing up their school.

I believe Nathan Phillips and the Hebrew Israelites went to the pro-life march with a camera crew to find scapegoats to create a media sensation. The twitter frenzy originated from a fake twitter account from a fake teacher in Brazil with 40,000 followers titled fight2020. They were able to professionally edit the video and make it go GLOBAL – on all the network news channels – in mere hours!

Now with lawyers nipping at their heels, they “find” some decency and use the opportunity to prepare the minions that perhaps their really isn’t any there – there for the Mueller report.

Didn’t they hire the lawyer who brought the famous lawsuits against NBC during the Atlanta Olympics? NBC had falsely accused that security guard of being responsible for the Olympic Games bombing in Atlanta and pilloried him endlessly.

In the end, it wasn’t only NBC who was forced to pay many millions of dollars in damages but many others who settled rather than go to court. With the social media, it’s much easier today to assemble the list of who said what in building cases. That is almost certainly why most of these flibbertigibbets deleted their tweets and/or walked back their initial comments.

The Leftist media and Dems plan to rid the world of the scourge named Trump involves –
1. Nuclear war with North Korea
2. Major terror attack on NYC by Islamist wearing MAGA hats
3. Total and complete meltdown of economy and stock market
4. Vilification and destruction of any innocent man, woman or child in any way associated with Trump including hat wearing.
5. Putin admitting publicly that he has a special phone that uses to talk with Trump every night before he goes to bed.
6. A picture of Trump wearing a KKK Grand Dragon robe.
7. Discovery of 100 dead Guatemalan children hanging from Trump’s fence with letters on them pleading for Trump to let them in.
8. All of the above

She didn’t answer the question, though. Corrosive, knee-jerk hatred of the President doesn’t make a person ignorant, unimaginative, or just plain dumb. Those gifts come from somewhere else.

Confusion of “cause” and “effect” stalks the land. Of course “cause” and “effect” involve “logic”—not exactly a strong point of Joy, Whoopi, et al. The cause remains a mystery to The View. Blind hatred, and the inability to learn for past mistakes, are both effects. Perhaps the cause is that we’re dealing with 12-year olds. Naturally, this will never occur to the 12-year-olds themselves.

New precedent: Enough shrill harpys want something, you can do ANYTHING to that end. Good to know.

Lefties have always embraced “ends justifies means” mentality. This should surprise no one. This should disgust and repel everyone.

Wanting to get rid of Trump is a true answer. Another true answer is they are simply bad people.

Fools went to the media to tell their story. New narrative on deck. The victim didn’t apologize to his abuser.

The irony is that their ludicrous, despicable behavior is simply ensuring that more Americans will vote for Trump in 2020.

Once again the Joyless Brayer bloviates out another load of stinking fertilizer.

Who says Hee Haw is only on reruns!?

Sure takes a lot of energy to maintain a constant state of manic rage. Not a pretty sight.

So basically Behar admitted that the kids were collateral damage in the campaign to destroy Trump.

so, the reason they are all seeing rays of sunshine and kindness is….drum roll please…

From FOX and Friends:
“Robert Barnes: Everybody is now on 48 hours notice. So by Friday everybody needs to retract and correct any false statements they have issued about these kids. That means any major member of the media. That means any celebrity. That means anybody with a substantial social media platform. If you have said anything false about these kids. They are willing to to offer you a 48 hour time period, a period of grace, consistent with their Christian faith, for you to through confessions get redemption to retract and apologize. If you do not in the next week you may be a defendant in a lawsuit.”

Part of me was thinking that a long delay between 11/7/2017 and 5/1/2019 will hurt the Oberlin case, but then another part of me is realizing that this continuous onslaught of racism accusations that are being proven false time and time again will only act to show both the method and intent by Oberlin to defame Gibsons. Perhaps the delay will result in many many more people digging themselves into holes that they won’t be getting out of easily.

This statement is going to look great in a Trump 2020 campaign ad!

“Because we’re desperate to get Trump out of office.”

And how about putting it to some rap music?

One of the few positive unintended consequences of having our entire lives on video is that it is becoming more difficult to cut, paste, and edit in ways that will shape the narrative permanently. With everything on video, the truth is out there, and the edit jobs, like this one, get exposed quickly.

Funny how their reasoning seems to be the same as the #neverTrumpers who “stupidly” joined the pile-on.

They saw Trump supporters and their gut reaction was to hate these kids because they viscerally hate anyone who doesn’t hate Trump as much as they do.