Mayorkas: “It is the policy of this administration: we do not agree with the building of the wall” 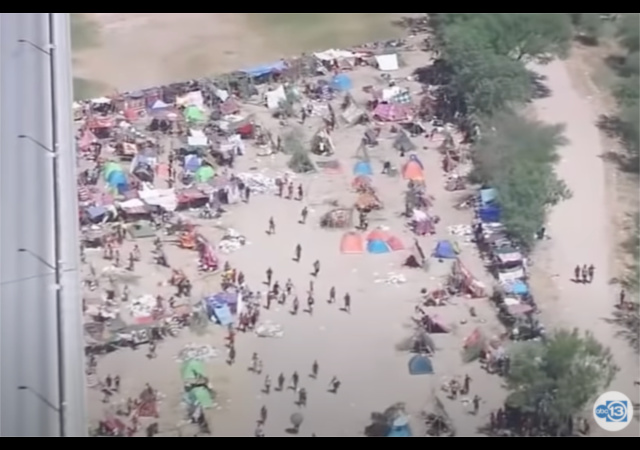 The Biden border crisis is an absolute disgrace.  Not only is his open borders policy creating a humanitarian crisis, but it is threatening our national security and public health.

To distract from the disaster he created, Biden had the audacity to embrace the complete lie that the Border Patrol, an agency of the Executive branch for which he is solely responsible, “whipped” Haitian illegal aliens.  Not only is this a proven lie, but it is being used as a skin-crawlingly cynical political ploy.

Ineffectual political hack and Homeland Security secretary Alejandro Mayorkas said Sunday that 12,000 Haitian illegal aliens have been released into the U.S. and admitted that the number “could be even higher.”

DHS secretary says up to 12,000 Haitian migrants detained in Del Rio have been released inside the U.S. Mayorkas admits the number “could be even higher.” @FoxNewsSunday

Homeland Security secretary Alejandro Mayorkas confirmed that about 12,000 migrants who arrived in Del Rio, Texas, over the past two weeks have been released into the U.S., in an interview on Fox News Sunday.

Host Chris Wallace noted that out of 30,000 migrants who came to Del Rio, Mayorkas has already stated that about 12,400 will have their cases heard by immigration judges, while another 5,000 are still being processed by the Department of Homeland Security.

“Of the 17,400 that weren’t deported back or returned on their own to Mexico . . . how many have been released into the U.S.?” Wallace asked.

During the same interview on Sunday, Wallace asked Mayorkas why the Biden administration did not stop the migrants from crossing the Rio Grande into Texas.

“Why didn’t you build—forgive me—a wall, or a fence, to stop . . . this flood of people coming across the dam? It looks like a highway that allows them to cross the Rio Grande,” Wallace said.

“It is the policy of this administration: we do not agree with the building of the wall,” Mayorkas replied. “The law provides that individuals can make a claim for humanitarian relief. That is actually one of our proudest traditions.”

The problem, of course, is that most of the Haitians have been happily living in South America for years, some for over a decade, before learning of Biden’s open border policy and deciding to upgrade again by illegally entering our country.

The only legal reasons are persecution based on:
Race
Religion
Nationality
Membership in a particular social group
Political opinion https://t.co/6bxEEG03wM

Indeed, the fact that Biden was flying some number of them back to Haiti was considered by the left as inhumane and akin to slavery because these Haitians hadn’t been in Haiti in many years.

The New York Times was on top of this “outrage” of Haitians being sent back to Haiti when they were actually living in Brazil or wherever for up to a decade before hopping on the Biden illegal alien train to America.

They have arrived this week by the thousands, Haitians who had heard of an easy way into the United States. In what appeared to be an endless procession across the shallow waters of the Rio Grande, they carried mattresses, fruit, diapers and blankets, provisions to tide them over while they awaited their turn to plead for entry into America.

For so many, it had been a journey years in the making.

“A friend of mine told me to cross here. I heard it was easier,” said Mackenson, a 25-year-old Haitian who spoke on the condition that his last name not be published. He and his pregnant wife had traveled from Tapachula, Mexico, near the country’s border with Guatemala, where they had been living after earlier stops over the last three years in Chile, Bolivia, Peru and Panama. “It took us two months to get here on foot and by bus.”

. . . . Most of the Haitians in Mexico — a country that has intercepted nearly 4,000 this year — were not coming directly from Haiti, but from South America, where, like Mackenson, they had already been living and working, according to a top official in the Mexican foreign ministry. The number of Haitians heading northward across the border that separates Colombia and Panama — often by traversing the treacherous jungle known as the Darién Gap — has also surged in recent years, increasing from just 420 in 2018 to more than 42,300 through August of this year, according to the Panamanian government.

. . . . Following the catastrophic 2010 earthquake in Haiti, tens of thousands of Haitians headed southward to Chile and Brazil in search of jobs in two of South America’s richest countries. To get there, many undertook an arduous overland journey across the continent through the Amazon and the Andes.

. . . . “We are dealing with this really new type of migration, which are these Haitians coming from mainly Brazil and Chile,” said Roberto Velasco, chief officer for North America at Mexico’s foreign ministry. “They are mainly looking for jobs. They come from third countries, so repatriation is difficult.”

Not only is “repatriation” difficult but so is seeking asylum in the U.S. from a safe country like Brazil or Chile, two of South America’s wealthiest nations . . . now that Venezuela has decided that being a wealthy successful nation wasn’t nearly as desirable as becoming a communist hellhole of human degradation, squalor, poverty, and starvation.

These are not people seeking “humanitarian relief”; they are seeking the American Dream and the opportunities afforded by American capitalism. Too bad for them that the Biden administration and the radical leftist-run Democratic Party are well on their way to destroying both (ala Venezuela).

Faced with faux leftist outrage over a “whipping” incident that literally never happened and the probably real outrage that Haitians were being flown to Haiti when they hadn’t lived there for years, the Biden administration threw up its hands and just dumped all these Haitians throughout America.

Word has gotten out. Thousands more Haitians are making their way across Panama on their way to Biden’s open borders and his free transportation to an American city or town.

Would be a bad bad look

They went up on the breadth of the earth and surrounded the camp of the saints and the beloved city. And fire came down from God out of heaven and devoured them.

Average IQ in Haiti is 67 so that’ll work.

If the government refuses to maintain sovereignty, then why do the citizens have to treat them as sovereign?

Because they will imprison me or shoot me in the face if I don’t?

Just denounce your citizenship and sneak back in over the border. You will be a hero!

Mayorkas admits that more than 12,000 illegal Hatians have been admitted into the country, they most likely have not been vetted and it probably includes many criminals because it was all done so quickly.

Mayorkas does not admit this is a problem. You would think just one illegal crossing the border would be problem. But 12,000 were let in in one night and 19,000 more are on the way and we are told not to worry, it’s not a problem. There is no number that high enough they would consider it a problem. Illegals crossing the border is one of our proudest traditions. The more illegals that cross the prouder we are.

We are in strange new territory my friends.

“”most likely have not been vetted””

Or tested for various noxious and communicable diseases.

Mayorkas makes me cringe, almost as much as Biteme.

He claimed people were being fed false information about our southern border being open and don’t come here. He then sends these Haitians all across America thus sending a worse message.