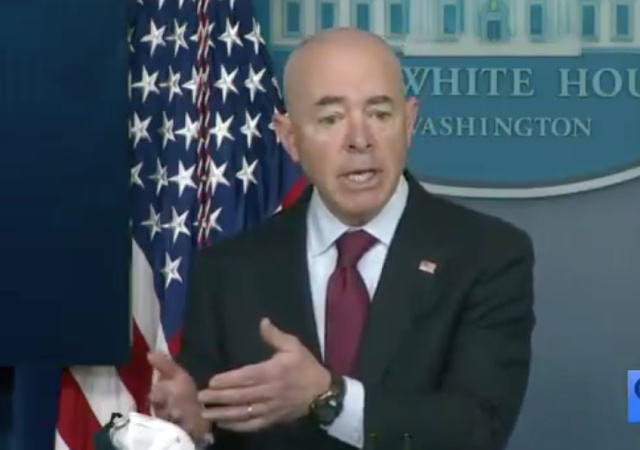 There is at least one person in the Biden administration who is willing to admit that what’s happening at the border is a disaster, even if he didn’t mean for people to hear it.

Biden’s DHS Secretary Alejandro Mayorkas said in a recently leaked piece of audio that the border crisis is “unsustainable.” It’s nice to hear someone finally say it.

Homeland Security Secretary Alejandro Mayorkas met privately with Border Patrol agents in Texas and said in leaked audio that the border crisis is “unsustainable” and “we’re going to lose” if “borders are the first line of defense.”

“A couple of days ago I was down in Mexico, and I said look, you know, if, if our borders are the first line of defense, we’re going to lose and this is unsustainable,” Mayorkas said Thursday, according to the audio obtained by Fox News’ Bill Melugin through a Border Patrol source. “We can’t continue like this, our people in the field can’t continue and our system isn’t built for it.”

Mayorkas told the agents that the current border situation “cannot continue.” He said the federal government’s system was not designed to handle such an influx of migrants as the U.S. has seen in recent months and he was “very well” aware that the sector recently came close to “breaking.”

“It’s our responsibility to make sure that that never happens again,” he said.

“This is unsustainable. These numbers cannot continue.” pic.twitter.com/60sQDuApWl

Ed Morrissey of Hot Air points out that despite this admission, there’s still no plan:

Mayorkas spent yesterday talking out of both sides of his mouth, but the numbers speak to the reality. The Biden administration touched off a massive rush to the southern border with its rhetoric as well as its policy changes in its opening days. Ever since, they have tried to use rhetoric alone to stem the tide, an approach that even Mayorkas admits — privately — is hopeless. They aren’t executing any kind of plan. They’re just hoping the rest of the national media continues to give them political cover so that Americans don’t hear about the worsening crisis on the southern border.

The crisis is literally off the charts:

Biden's Border Crisis is LITERALLY off the charts. pic.twitter.com/xV3DTpsBzI

Michael Yon, a war correspondent, down at the darien gap:
20,000 a month army of mostly young, military age, men are headed to the United States

Yon: I just made this video in the jungle. The video and my written description are raw and unedited.

Normal, no. But under a senile figurehead was already a dolt before his marbles started to disappear, it’s par for the course.

You could almost read his statement as a warning to the Border Patrol to “get control of the border or else!”

Somehow, I am sure this will be Trump’s fault. He built a wall and we were warned that walls don’t work.

Women only judge whether you mean well, not whether it will work.

Foolishness is the female fault corresponding to the males’ fault of skepticism (not being quite certain that… and driven to nail it down).

Am I the only one who suspects that if the Biden administration thinks there is a border crisis, it’s only that they think the system needs to be improved (more money!) to handle the increased (and increasing) numbers without any embarrassing optics?

I.e., I seriously doubt reducing the number of immigrants is in the cards.

I thought it was sustainable. I thought the plan was to let ’em keep coming in until everybody that lives in Mexico has moved here. Then close the border and don’t let ’em go back. That’ll teach ’em.

Biden needs to continue with President Trumps immigration/invasion policies and extend public health exclusion to all migrants, including minors, and revive both the “Remain in Mexico” policy and “safe third country” agreements with countries like Guatemala. These policies worked and need to be reinstated immediately for the safety and financial benefit of our Country. Then finish building the wall because it works! This invasion of our Country by illegal aliens needs to stop now!
A Country needs to keep its own identity, culture, laws, customs, and keep its citizens safe from the evils and dictates of the new world order globalist idiots including its social media! Once you lose your Country, it is almost impossible to get it back. Think about that for a while.
Politicians who ignore the reality of, “If you bring there here, here becomes there” are unsuited for public office!

“we’re going to lose” if “borders are the first line of defense.”

Y’all familiar with the current CBP doctrine that “border security” extends 100 miles into the continental US?
That checkpoints can be set up anywhere in that area to check for illegal immigrants?
That (for just one example) permanent checkpoints like this exist (in my state) on I-8 between Arizona and San Diego (22 mi from the border), and I-10 east of Tucson (60 mi from the border); and similarly in other states, trawling EVERY vehicle using those interstate highways? (“Good morning. Are you all American citizens? Are you all related? Where are you going? Business or pleasure?”)

You may ask, given that it is painfully obvious that the administration doesn’t really give a crap about the presence of illegal immigrants in the USA (insert “kid and the wanted poster” joke here.), why does it continue to run such checkpoints?

Because the Fourth Amendment doesn’t apply at the border. That’s why they can search your s*t (including your electronic s*t) when you get off international flights.

And if the border is 100 miles wide, then that’s a bazillion square miles inside which your Fourth Amendment rights are whatever they want to say they are.

And — get this — two out of three Americans live within that “narrow” hundred-mile ribbon around the border.

Rather that refer to a conservative (and therefore white supremacist insurrectionist) site to support these facts, I’ll refer you to a left-wing socialist one.

Is Mayorkas dogwhistling what his “next line of defense” is going to be?.

Today, Andy Biggs (R-AZ) is claiming he is filing articles of impeachment against Mayorkas.