“No, there is no change in position. Children coming to our border seeking refuge from violence, economic hardships and other dire circumstances is not a crisis.” 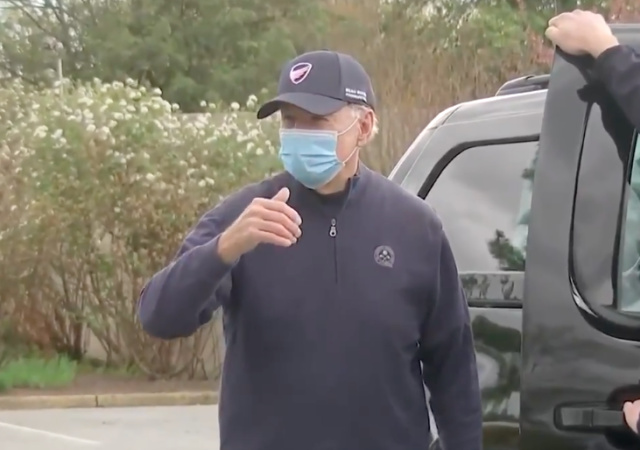 President Joe Biden caught everyone off guard when he appeared to admit the U.S. has a border crisis.

Biden addressed reporters on Saturday about his decision to raise the refugee cap after initially keeping President Donald Trump’s 15,000 cap:

After months of lying to the American people Biden strolls off the golf course and admits that the situation at our southern border is a crisis. He still refuses to visit the border. pic.twitter.com/srCLnEeVzu

But I guess that is not what Biden meant. From CNN:

On Monday, the White House sought to downplay those words, claiming Biden was referring to the conditions in Northern Triangle countries that migrants are coming from and not the surge of migrant children in US custody.

“No, there is no change in position. Children coming to our border seeking refuge from violence, economic hardships and other dire circumstances is not a crisis,” a White House official told CNN.

That official added, “The Federal Government’s response and process has been laser focused on finding solutions that allow us to address these root causes, expand capacity space and quickly transfer children to relatives. We remain focused on getting children out of CBP facilities, into proper facilities, and ultimately united with relatives or sponsors who are safe and have been vetted.”

“The President does not feel that children coming to our border seeking refuge from violence, economic hardships, and other dire circumstances is a crisis. He does feel that the crisis in Central America — the dire circumstances that many are fleeing from — that that is a situation we need to spend our time or effort on and we need to address it if we’re going to prevent more of an influx of migrants from coming in years to come,” Psaki said at the press briefing Monday.

The world is full of people living in circumstances of violence, deprivation, hardship and oppression. Should we admit them all? Do the Dhimmi-crats believe there should be any limits to our immigration admittance policies? What is the purpose of having lawful immigration procedures, if millions of people receive the privilege of priority at the front of the line, precisely by flouting those procedures?

The Dhimmi-crats’ border laxity and policies are indefensible from all standpoints.

But that’s the same debunking argument that applies to “minimum wage,” which never works, either. Democrats just cover their ears and scream “LA LA LA LA!”

Emigration reform to mitigate progress and collateral damage at both ends of the bridge and throughout. Working with our neighbors, we can change the status quo.

The problem of being on both sides is if you slip you’re cut in half.

Democrats know they can sell people real estate in Hell, as long as they can keep the brochure pretty.

And if you believe that one, I have a bridge in Brooklyn I’d like to sell you…

She doesn’t realize it but Jen Psaki just endorsed the position of the DJT ‘remain in Mexico’ policy: ‘..coming to our border’ in her words.

That is exactly what the very effective DJT policy was: come to but be turned away from our border, file your bogus asylum claim in Mexico and we will process it and let.you know.

Psaki left out the part that eliminated the ‘crisis’: remain in Mexico. Since the.Biden Admin still doesn’t believe a crisis exists at the border how about once these folks are released? Where do they go? Where do they live? How do they eat?

If provided work authorization aren’t they competing with citizens and lawful residents for employment? Since most have no or low skills doesn’t their presence put downward pressure on wages, particularly in minimum wage jobs?

If they go to say, Southern CA, which already has a population in excess of it’s carrying capacity v available water and energy doesn’t that exacerbate the scarcity? What will be the impact on local schools? Especially in light of on going Rona requirements demanded by teacher unions?

Will the Biden Admin be picking up the tab for all these folks? If not why not? MS Psaki can ‘circle back’ but I won’t hold my breath for answers.

This is actually pathetic.

They are LITERALLY saying that Biden’s statements don’t represent the position of the ‘Biden administration’.

That’s what they believe. Remember how they lambasted Trump for supposedly going against U.S. foreign policy? He’s the president, our foreign policy is what he says it is. Career executive branch swamp creatures have run things for so long that they have lost their way and do see the president as working for them rather than the other way around. That’s a good part of why they worked so hard to discredit and oust Trump.

“…seeking refuge from violence, economic hardships, and other dire circumstances…”

Was she talking about Detroit?

So, what they’re saying is that the pedophile-in-chief’s positions don’t reflect the position of his regime?

I get so distressed to see Psaki giving redheads a bad name day after day.