“On Monday, we watched Border Patrol drop off bus loads of migrants in downtown McAllen all day long. Every 30 minutes.” 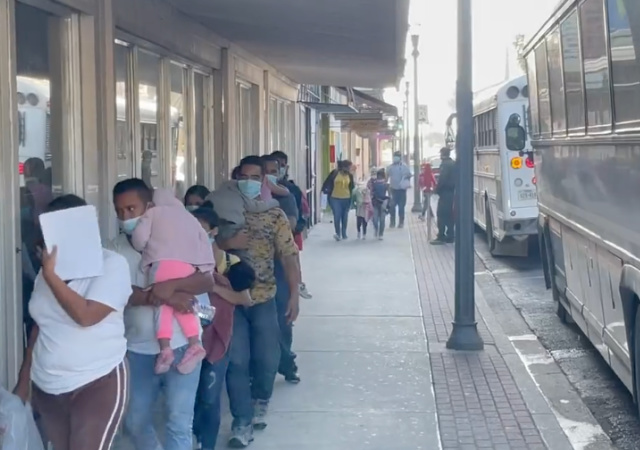 NEW: The city of McAllen, TX says the federal government has released over 7,000 COVID positive migrants into their city since February, including over 1,500 new infected migrants in just the *last week alone*. A local state of disaster in McAllen has been declared. @FoxNews

On Monday, we watched Border Patrol drop off bus loads of migrants in downtown McAllen all day long. Every 30 minutes. Hundreds released in front of us. https://t.co/G4ENHuX7sJ

BREAKING: The city of McAllen has started constructing emergency shelters for illegal immigrants released by Border Patrol. The city says the federal government is releasing “an alarming number of immigrants into McAllen, and that the feds aren’t testing them for COVID. @FoxNews pic.twitter.com/hy9TbKtgCM

According to the city of McAllen, since mid-February of 2021, there have been over 7,000 confirmed COVID-19 positive immigrants released into the City of McAllen by CBP, including over 1,500 new cases in the past seven days.

The Catholic Charities of the Rio Grande Valley previously released a statement explaining that migrants were tested before entering the facility, negative cases were allowed in and positive cases were placed in other areas to avoid the continued spread of COVID-19.

Cortez and three other South Texas county judges from Willacy, Cameron and Starr counties have held firm against issuing disaster declarations that coincide with Gov. Greg Abbott’s declaration. But Cortez said Monday’s declaration was necessary and these “extraordinary measures” were taken to help the county hopefully qualify for additional funding to help mitigate untold costs associated with the migrants.

On Monday evening, McAllen Mayor Javier Villalobos, whose city is the largest in Hidalgo County, also issued a disaster declaration. The city’s declaration is due to the high numbers of migrants that the city is dealing with as the Department of Homeland Security releases hundreds of migrants per day in downtown McAllen to the care of the nonprofit Catholic Charities of the Rio Grande Valley, which is operating out of a building owned by the city.

The county’s two-page declaration, which declares that “U.S. Customs and Border Protection is releasing an alarmingly substantial number of immigrants into the City of McAllen,” is different from the disaster proclamation issued by Abbott on May 31, 2021.

The city’s two-page declaration was similar in text and tone and also is valid for seven days at which time it will require a vote of the city commission to extend.

Shouldn’t the feds be requiring that every single illegal, covid positive or not, get a shot? If they think citizens need them to take part in normal daily life, they sure as h**l should be requiring them of non-citizens. That they don’t is rather telling of their opinion on its usefullness, no?

We should all start identifying as undocumented and therefore no papers or medical information can be expected of us.

One does wonder why government and businesses are demanding that all Americans must be vaccinated, and provide proof therein, but it’s okay to let illegal immigrants run around with COVID and not be vaccinated.

The illegals in federal facilities are, ahem, a ‘captive audience’. Why not vaccinate them right then and there?

Hate to be the wet blanket here, but it would probably run afoul of the Nuremberg Code. The first rule is that medical experiments must be consented to without duress, in all cases.

Given last I checked, these are emergency use authorized, they’d still fall under that. Offering is fine, but compelling is verbotten.

And of course, Greg Abbott will be thrown under the bus for his lenient covid policies when numbers go up.

It’s almost like covid isn’t the concern anymore. Just what covid allows you to get away with.

Yet the left claims Abbott and DeSantis that are killing people. This is a clear regime violation of TItle 5.

YOUR HEALTH IS NOT AS IMPORTANT AS OPEN BORDERS

This tells you ALL you need to know about the Democrat priorities. Nothing is more important to them than adding millions of illegal aliens and permanently changing the American society in fundamental ways. Wat is it that they hate so much about America? Given recent events it’s hard to conclude anything but straight white people and capitalism. That seems to be a common theme that runs through all of the Democrat policies.

Half the Democrats I know are fed up with the Progressives and their anti-American policies. They are ONLY Democrats because they have been brainwashed to think the GOP is the party of racists and Donald Trump. One guy is about ready to switch to Republican but it took 3 months of me showing him how Democrats are the actual party of racists and especially the neo-racists. The Dem propaganda is so strong.

Education is the key to liberty. Talk to Democrats. Ask them if this is what they signed up for. You’ll be surprised at how many say “no, hell no”

Can we call that a ‘super spreader event’?

How about we call it what it truly is, bio-terrorism. Bio-terrorism using covid infected, illegal aliens crossing the southern border as the weapons of mass destruction.

This isn’t going to help make the feds case that public health can be ignored in the context of immigration.

Gee…you’d almost think they were doing this intentionally to drive up the case numbers in red states….almost.

Biden is infecting the entire country! Nobody asks why?