Gov. Greg Abbott also shut down six points of entry on the border. 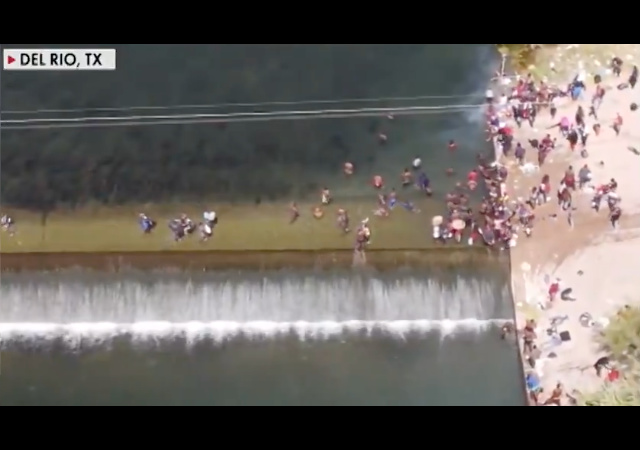 *UPDATE* The FAA cleared Fox News to fly drones over the bridge in Del Rio, TX.

BREAKING: FAA has cleared @FoxNews to fly our drones to fly in the restricted airspace around the international bridge in Del Rio. https://t.co/zegGdXrr3M

Local law enforcement also took Bill Melugin in the helicopter to view all the migrants under the bridge.

Another thing I noticed during our helicopter tour…a bulldozer was clearing out an area near the international bridge. It appears it may be for potential emergency shelters or maybe a processing tent. Clearly, the Feds are going to be putting something there. @FoxNews pic.twitter.com/S8SK3Kak71

Fox News has shared numerous videos from drones over a bridge in Del Rio, TX, because almost 10,000 migrants have packed themselves under it.

Biden’s FAA issued a temporary ban on drones over the bridge for “special security reasons.”

The FAA told Bill Melugin of Fox News that the border patrol asked for the ban.

NEW: We’ve learned that the FAA just implemented a two week TFR (Temporary Flight Restrictions) over the international bridge in Del Rio, TX, meaning we can no longer fly our FOX drone over it to show images of the thousands of migrants. FAA says “special security reason”. pic.twitter.com/aJrjAPO2Pz

We won't let the FAA control the news you get. Watch this video and see how @faanews tried to shut down our newsgathering on the southern border. That can't happen. Our own @BillFOXLA will be back with us on @FoxNews tomorrow at 8pm ET. pic.twitter.com/4WIJCC0O4y

Melugin posted a video from his law enforcement source on the ground of the migrants under the bridge. The majority of them are Haitians.

NEW: Source on the ground at the international bridge in Del Rio just sent me this video showing the deteriorating situation. Federal source says the number has now increased to 9,300.
It was 8,200 this morning, and about 4,000 yesterday AM.
Mostly Haitians, I’m told. @FoxNews pic.twitter.com/e8ftMp4YoQ

Melugin also reported that Gov. Greg Abbott shut down six points of entry along the border after Biden “flip-flopped” on border security.

UPDATE: Governor Abbott has released a new statement saying the federal government initially reached out to Texas to help with closing points of entry at the border, but reversed their decision six hours later, and “flip flopped to a strategy that abandons border security.” pic.twitter.com/IZHe1fbu8x

News broke on Thursday that the Border Patrol encountered over 200,000 migrants in August. The numbers slipped from July, but not by much:

If this would have happened under Trump the very Redhead troll that will be exonerating it this afternoon would have been demanding heads roll.

If this had happened under Trump, every drone in America would be down there by now

(which is of course is a result of her boss’ incompetence).

Joe Biden needs to be arrested and tried for treason. Not only has he given billions of dollars of our weapons to the Taliban, a terrorist organization, but he’s leading an invasion of non-citizens at our Southern border. The invaders may be carrying all kinds of diseases and may also include terrorists carrying our weapons.

Getting rid of the pointless figure head won’t do anything.

You need to go after every Democrat who is pulling the strings in the back ground. They ate the truly dangerous ones.

“Biden’s FAA issued a temporary ban on drones over the bridge for “special security reasons.”

Translated into plain English: “Hide bad shit from the public and pretend it’s not happening.”

Remember: If CNN doesn’t report it, it never happened.

I woulda thought that the 1Amendment would have had some bearing on this situation, but I must be confused. Maybe the ACLU can straighten me out.

I would ask Milley about it but he’s on the phone with China.

def-American usage: Makes the Regime look bad and focuses attention on something we don’t want the peasants getting uppity about and that might inspire white supremacist domestic terrorists.

“Biden’s FAA issued a temporary ban on drones over the bridge for “special security reasons.”
Because shut up.

Heaven forbid, we can’t let the citizens of our country know what is really going on with illegal immigration.

As you know there is no such thing as Illegal immigrants. These people are clearly trespassers who of course, by definition, are here illegally. I prefer the term “illegal human beings”. ha ha.

Yeah and they didn’t land at Normandy.

Soviet Union blocked tourists from going outside Moscow because they didn’t want the outside world to see how awful it was.

/sarc So glad our government are the good guys. sarc/

And over at the Peter Paper, they continue to screech “Democracy Dies in Darkness!!!”

Ordinary citizen: “It can’t be that bad. I haven’t seen a bit of this footage on CNN/MSNBC/CBS.”

“When any government says to the people, ‘This you may not read, this you must not see, this you are forbidden to know.’ the end result is tyranny and oppression no matter the motives.”

Of course they’re closing down the airspace to keep news outlets from airing the pictures of this disaster. Anyone want to bet that US tax dollars are paying for the Haitians to get from Hispaniola Into Mexico and up to our southern border?

Seems to me that would be a good topic for at least one Congressional investigation.

I was actually thinking of the Dim assmunching goblin from New York, but touche sir

Fox News and anyone else who wants to (i.e., private citizens) should fly as many drones as they want to in the vicinity of this bridge and give this FAA order the middle finger. What are they going to do — scramble some fighter jets and shoot them down?

They will trace the radio signal to the operator. Arrest them, fine them, and jail them. Then treat them like the Jan 6er’s and keep them jailed without bail for an indefinite time in violation of the 8th amendment. ‘Cause who’s going to stop them.

this action reeks of desperation by the junta–as a practical matter, try interdicting a flying machine(let alone a gaggle of them)as small as a drone–good luck with that–particularly if the machines are operated from the Mexico side

Also, let’s please try to refrain from using the vile Dhimmi-crats’ intrinsically dishonest, propaganda euphemisms, in describing illegal aliens. They’re aliens; invaders who are properly described as aliens, not “migrants,” or, “undocumented immigrants,” or, “undocumented Americans,” or whatever other linguistic contrivance the Dhimmi-crats concoct to suit their narratives and their agenda.

How about cameramen with jet packs ? Are those okay?

I think that would be okay as long as they have their COVID passport and are not on the No Fly List.

“Nothing to see here. Everything is under control. Let’s move along and move on from these Trump inspired distractions.”

Makes sense, one might crash and kill a hundred or two people that area is so packed with humanity.

Question 1 – What part of 10’s of thousands of foreigners amassing on the border of a country with the clear intent to gain access outside of legal means not considered an invasion…. and from the video FoxNews was sharing from a Texas DPS helicopter…. this appears to be a planned, organized and funded invasion.

Question 2 – Haitian Immigrants….. What the heck? There is no direct way for Haitians to get from Port-au-Prince to Cuidad Acuna! That is a 11 hour flight into Del Rio, Acuna has no airport…. and these folks are showing up with luggage in taxis to get to the staging areas under the bridge. Someone has to be making the arrangements and funding this group with the intention of creating a massive wave of humans to eventually overwhelm and wipeout the border. And to go one step deeper…. if the Haitians are fleeing the conditions following last month’s earthquake, why are the heading to Del Rio instead of Miami which is 2 hours away. Something smells rotten in Denmark

FYI – Commercial flights from Haiti to anywhere in Mexico is $1500 per seat. That doesn’t include how they are getting from an airport to Del Rio.

AMAZING — Since the Biden administration has kicked @BillFoxLA
and his team out from flying Fox News’s drones along the U.S./Mexico border in Del Rio, TX, *local* law enforcement decided to get him a helicopter to hop in and go check things out to continue reporting.
https://mobile.twitter.com/CurtisHouck/status/1438920452433457152

Perhaps someone should donate a drone to local law enforcement. Or loan one. So they can ‘keep an eye’ on the border.

With the proviso their video feed is made publicly available.

Once again, Abbot working on fixing the barn door after the horses got out. Or in this case, millions of illegals got in. No one can accuse this guy of jumping the gun nor overplaying his hand. Everyone messes with Texas with Abbot as governor.

have another blunt phil–abbot isn’t perfect, true, but compared to the likes of wendy davis, he’s the lone ranger

He’s not that much different than Davis. Abbot never takes the initiative on anything. He only acts when the flames are searing his ass. He is just another George Bush. Gets by with his BS in Texas but let’s make sure he doesn’t ever get to the WH.

And BTW, why do Texans keep voting for these squishes? I realize that there is a very large hard core conservative constituency in Texas but can’t they ever get a governor who does more than appease them once he is cornered? Abbot is lame.